Young ex-offenders have been given the opportunity to work on the aptly named project ‘Blank Canvas’, a pop-up in Westfield Stratford City mixing fashion and employment workshops.

The pop-up is designed to give disadvantaged young people skills in business, fashion and retail, through a mix of classes led by LinkedIn, and by selling a clothing range designed by ex-offenders – the sales of which will support other similar projects.

Attendees also get free professional headshots and one-to-one career advice, as well as being shown how to set up a professional LinkedIn profile and get tips on networking.

Inside Out’s project founder Greg McKenzie, who is behind ‘Blank Canvas’, tells Metro.co.uk: ‘Unemployment rates for former prisoners are much higher than among the wider population, even ten years after release.

‘But there is a positive correlation between employment and reduced reoffending, which shows the need for proactive policies to ensure more prison leavers are able to access job opportunities and the tools and training they need to succeed. This is what Inside Out is all about.’ 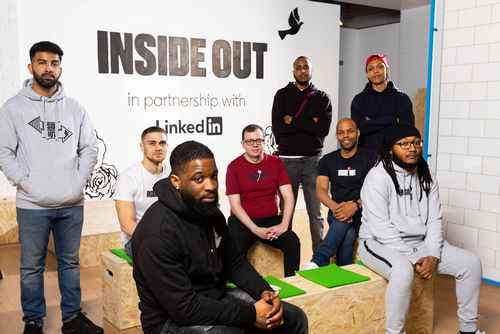 Donell, a 24-year-old from Ponders End, is one of the young men benefitting from the project.

‘It’s always great to meet people who have been on similar paths to you in life,’ he tells us, ‘hearing what they have to say about their past experiences, the lessons learned and what they’re planning for their future – the different perspectives are refreshing and humbling.

‘The positivity from Zack and Greg [Inside Out founders], and all others involved, made it feel like a real community and the project has really given me a great outlook on life.

‘I’m feeling positive about what is to come.’

Donell now says he would try designing clothes again the future, having now ‘gained new skills and made great connections’.

‘I’m keen to potentially make my own clothing line and explore other career options in the future,’ he adds.

Tashan, who’s 27 and from South London, is in a similar position.

He says: ‘Since leaving prison, I have worked closely with a charity called Switchback who try to help prisoners reintegrate into working life.

‘The team there sent me the application knowing I already have a huge interest in fashion, as I started my own clothing line before I went to prison.

‘In terms of the design, we brainstormed as a team and decided that doves represent freedom so we decided to come up with ideas around that.

‘Seeing the progress we’ve made as a team over the last couple months has given me a real sense of achievement. I’m so proud of myself and the rest of the group  who have helped bring this together.’

Now he would encourage other ex-offenders looking to rehabilitate and learn new skills to take up opportunities like this.

He adds: ‘I feel like blank canvas is really symbolic of second chances, which is what the project aims to do – and has certainly given me that.’

Tashan plans to mentor other ex-prisoners and help people move forward with their lives.

Inside Out co-director Zack Fortag says far more needs to be done to help young people who have been through the prison system.

‘Our research shows a real lack of opportunity for prison leavers in the entrepreneurial space.

‘With Inside Out we have a long-term vision to solve this mainstream issue.’