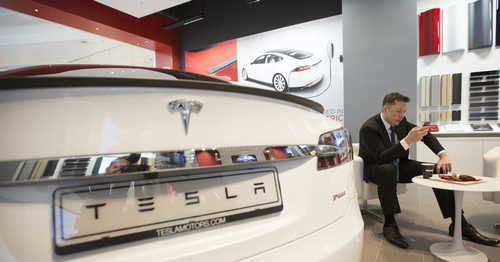 A Tesla has sold for bitcoin before, perhaps with a side of buyer’s remorse.

Back in 2013, Lamborghini Newport Beach sold a Tesla Model S Performance for 91.4 BTC at an exchange rate of $1,126 per coin, according to a CNN Business report at the time. The Model S retailed at the dealer for $103,000.

Elon Musk sparked a conversation on the payments role of the original cryptocurrency after his electric vehicle firm announced a $1.5 billion purchase of bitcoin earlier this week. Not only that, but Tesla has plans to accept bitcoin for purchases going forward.

However, the price of that bitcoin has appreciated 4,100% since the 2013 transaction. The digital asset broke above $43,000 to a high of $47,700 after the electric vehicle giant announced a $1.5 billion purchase in an SEC filing earlier this week.

As of press time, the value of the bitcoin used to buy the 2013 Tesla would be over $4.1 million.

The purchase was not necessarily the first of its kind concerning electric vehicles (although in terms of Tesla it seems to be). In 2013, a Toyota Prius was purchased for 1,000 BTC by one early bitcoin investor who lived off the digital currency.

Sadly, it seems Lamborghini Newport Beach did not hodl its bitcoin stash. Although more customers came forward after the news, the dealership apparently flipped the bitcoin for dollars using payment processor BitPay, CNN reported at time.

Lamborghini Newport Beach did not return questions for comment when reached by phone.

Bitcoin’s recent surge has brought Laszlo Hanyecz, the man behind the infamous “Bitcoin Pizza,” into the limelight this week. He told Bloomberg that he was “not too interested in Tesla” and advocated for bitcoin holders to not sell their digital currency.