This entire article is Saifedean’s fault.

Saifedean Ammous, author of “The Bitcoin Standard,” kept heaping steak tartare onto my plate at a Bitcoin meetup back in August 2018, in between jokes about liberal plebs.

As the youngest woman in the room, per usual, I wanted acceptance from the Bitcoin clan. Despite nearly a decade of (fickle) vegetarianism, I accepted the author’s meat offerings in exchange for an off-the-record interview. I torpedoed questions his way between bites. Ammous told me last week, via direct message, that he couldn’t remember if that was his first public steak dinner. But there would be many that followed.

Long before he became a bitcoiner, Ammous was a carnivore.

“I was, independently, into low-carb keto,” he said, referring to ketogenic diets. “These two things started to merge together more and more as people who were interested in Austrian economics became interested in meat and good food.”

Over the past decade, bitcoin-themed steak dinners have become a global ritual, hosted by communities from San Francisco to Tokyo. It was the Kraken exchange’s Bitcoin evangelist Pierre Rochard who organized most of Ammous’ steak-and-bitcoin dinners in New York, inviting friends from the Socratic Seminar meetup. This was all pre-COVID, of course. (These days, there are a few outdoor gatherings at beaches and parks.)

“I was traveling to the U.S. and Pierre told me to stop by in New York and he’d organize a dinner for me. Then 70 people showed up,” Ammous said. “After that, everyone on Twitter was constantly asking, and demanding, their own steak dinner in their own hometown.” 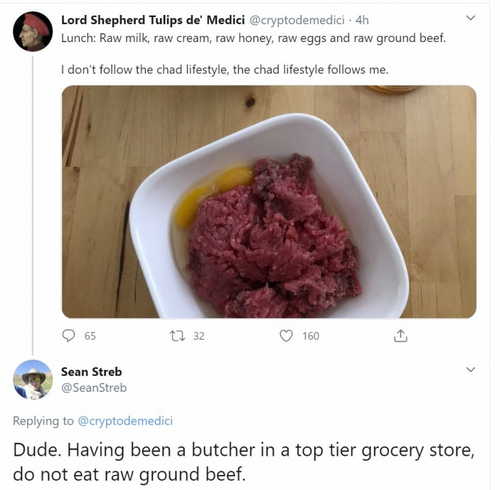 Ammous is among the most famous carnivore evangelists tweeting hot pics of fatty steaks, his version of thirst traps. In fact, the prolific economist penned a manifesto for grilling steak to “beat fiat food,” equating empty carb calories with inflationary government-issued money.

The (tongue-in-cheek) narrative says bitcoiners like Ammous will simply avoid the impending collapse of Western civilization by re-inventing feudalism, as lords of private “citadel” meat-lockers paid for with the world’s “hardest” money. Loving meat is a part of some bitcoiners’ shtick, along with hating journalists and socialism. Memes and jokes abound comparing “Soy Boy” or vegan token fans to hyper-masculine bitcoiners.

“It’s very masculine to grill. In the Wild West, the cowboys are always seen having this massive steak,” nutritionist Lorraine Kearney said in a phone interview. “Especially if they’re trying to lift weights and bulk up, it’s always about eating more protein.”

Back in 2018, I told Ammous I’d try carnivory, if only to gloat when my body didn’t magically transform into a lean, mean hodling machine. To my great dismay, two weeks of a 90% meat diet left me feeling stronger, more energetic and less emotionally volatile than I’d ever been. By the third week I stopped craving sweets and my doctor noticed a significant improvement in my health, compared to my last annual physical.

As it turns out, I’m hardly the first liberal woman to fall in love with both bitcoin and grilled flesh. To the contrary, author Amber O’Hearn was one of the most influential authors in the early days of crypto-carnivory. She’s been writing about her keto diet experiments for nearly a decade.

“I’m off all medications,” O’Hearn said, describing how this diet helped after her bipolar diagnosis. “I’ve never had symptoms of the mood disorder again.”

Like any crypto trend, believers can seem quite fanatic. Zcash co-founder Zooko Wilcox even tweeted that keto diets can help treat cancer. (Wilcox and O’Hearn were once married, but have since continued their meat evangelism separately.)

On the other hand, Kearney said high amounts of fat can contribute to issues like heart disease. Bitcoin-carnivores often dismiss this warning as “fake news” by the media-fiat-food-industrial complex, hell-bent on brainwashing the masses. Of course, every citadel-dwelling hero needs a “mainstream elite” villain to foil his own righteousness. However, the reality of carnivore diets may be more nuanced.

Kearney agreed with O’Hearn, broadly speaking, that high-protein diets can be very healthy and every person’s body is different.

The nutritionist said she’s known clients who feel amazing after years of only eating animal protein, while others prefer low-carb diets with diverse plants. She added that grass-fed meat has many more nutrients, so results may depend on the quality of the ingredients.

“The carnivore diet has been around for a number of years. But the research will take a decade, if not longer, to provide the benefits of such diets,” Kearney said. “When people remove inflammatory, highly processed foods and introduce a more natural diet, like with meat, they’ll see results like a decrease in weight gain and bloating, less fatigue and better gut health.”

There may also be some truth to the bitcoiner mantra that established norms were based on inaccurate science. Kearney said the past four decades saw a “massive shift” among nutritionists.

“Some of the products they used to recommend were processed foods … it was all about restricting calories,” Kearney said. “Now it’s more about focusing on balance and understanding the psychological aspects as well.”

“Bitcoin doesn’t care what you eat,” Stark said in a direct message.

The steak-loving author of “Bitcoin: Sovereignty Through Mathematics,” Knut Svanholm, agreed with Stark.

“I believe that we should probably leave diets out of any Bitcoin discussion,” Svanholm said. “It tends to be a bit silly and people are semi-religious when it comes to food preferences.”

Meanwhile, Wilcox and O’Hearn are among many bitcoin aficionados who ate a predominately meat dinner for Thanksgiving 2020.

“I like fatty steak, roast beef, ground beef and bacon more than turkey. And that’s even more true on Thanksgiving, which is a celebration of plentitude and togetherness,” Wilcox said in a direct message.

For a festive twist on the holiday classics, O’Hearn combined turkey with a keto-friendly stuffing.

“Sausage stuffing with ground pork and pork rinds, to help absorb the fat the way bread does in a stuffing,” O’Hearn said over the phone, describing the menu. “I also eat eggs and dairy without having too much of a problem. So for holidays I might have eggnog.”

It was O’Hearn who convinced me that bitcoiners’ meat fetish isn’t primarily the result of loud men’s testosterone-induced, Freudian fixations.

“There are these ideals about what a woman ‘should be’ that dissuade women from taking pleasure in their bodies and being physical. Meat is connected to that,” O’Hearn said, contradicting the diet’s stereotype. “Meat is sexy and carnal … plus, one of my primary roles as a mother is to nourish my children, inside my body, next through breast-feeding and then preparing their food and nutrients.”

Like so many bitcoiners who ate Thanksgiving dinner with their families, O’Hearn said she was grateful for her healthy family. As for myself, I ate plenty of plants this holiday, despite knowing lean protein makes me feel better than pecan pie. Rather than travel to family, I joined an outdoor gathering of bitcoiners for turkey, my first friendsgiving as part of the clan. I no longer felt like an outsider, nor was I the sole young woman. But I did bring my own rosé, because we all know the bitcoin cowboys will only bring beer and whiskey.

It may be precisely because of our differences, instead of despite them, that we were so grateful to gather with diverse friends contributing, in our own ways, to the first open-source, digital money. Especially during the pandemic, we’re thankful to be a part of an economic shift that just might manage to outlive our BBQ-slathered grills and little stone castles.