Cardano’s weekly chart suggests the current bullish momentum could see the price of ADA surge above $0.20.

Already, ADA’s value in US dollars has skyrocketed to highs near $0.185, although it’s currently changing hands slightly lower at $0.173.

Nonetheless, the eighth-ranked altcoin (by market cap) remains in an uptrend. Its price is up more than 16% over the past 24 hours and nearly 64% over the past seven days. Cardano’s price as seen over the past day is its highest level since September 2018.

The ADA/USD pair has printed a series of higher-highs and higher-lows since breaking above the $0.114 resistance line on 20 November. In the past few days, bulls have undertaken aggressive buying to push prices above multiple resistance levels. 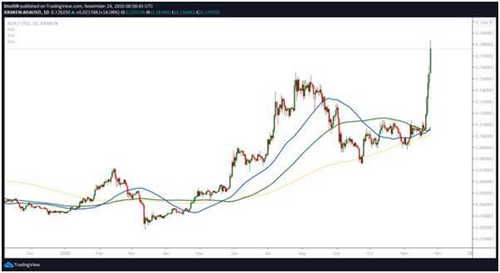 If bulls fail to retake the initiative towards a major resistance level around $0.183, they can still rely on a cluster of supply walls above $0.126 to remain relevant.

However, if support at the above level breaks, bears will likely have an easy time pushing prices to lows of $0.10. Here, the daily chart has the ADA/USD pair comfortably above the 50-day and 200-day simple moving averages at $0.107 and $0.101, respectively.

The charts also suggest that bulls can survive a sell-off to the $0.10 psychological support level given the presence of three exponential moving averages (EMAs): 50-day, 100-day and 200-day.

The weekly chart suggests that despite the overbought conditions of the daily RSI, bulls have an opportunity to retake $0.18.

The weekly RSI is upsloping into the green zone, while the ADA/USD pair currently trades near the upper limit of an ascending parallel channel. If a breakout to the upper boundary of the parallel channel occurs, bulls could test bears’ resolve around $0.20—$0.22. 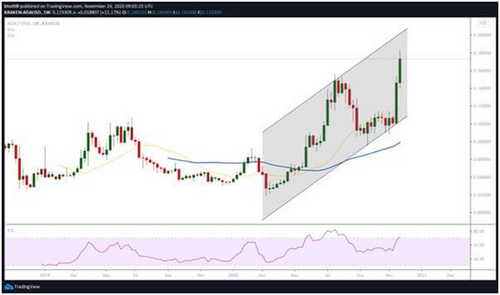 Overall, the short term outlook for ADA is bullish. However, bears can invalidate the sentiment if they manage a break below $0.10.