The bitcoin market is still in bullish territory after yesterday’s move over $9,400, a price not seen in almost two weeks. “Bitcoin is flirting with its 50-day moving average, but has seen short-term momentum improve after having deteriorated as of mid-May,” said Katie Stockton, analyst at Fairlead Strategies.

Stockton said bitcoin is currently part of a “risk-on market” – where investors take on riskier assets – and could fuel upward price pressure.

“A ‘risk-on’ environment could help foster a rebound, although resistance remains strong above $10,000,” she said.

Bitcoin’s performance the past 24 hours is flat as the world’s oldest cryptocurrency loses ground from Tuesday’s jump to over $9,400. 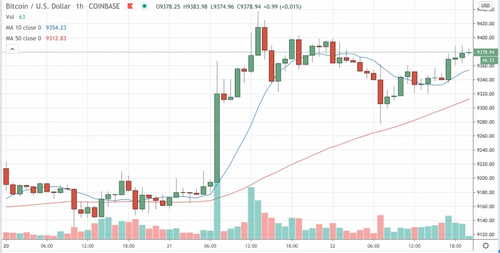 Bitcoin trading on Coinbase since July 20

“Since the halving event in May, bitcoin’s volatility has declined along with trading volume across all exchanges, leading the asset to be stuck in a range between $8,200 and $10,200,” said Pavageau. Indeed, bitcoin’s implied volatility, the options market’s expectations of a likely movement in price, was 49% on Wednesday, near the three-month low of 46% on July 3. 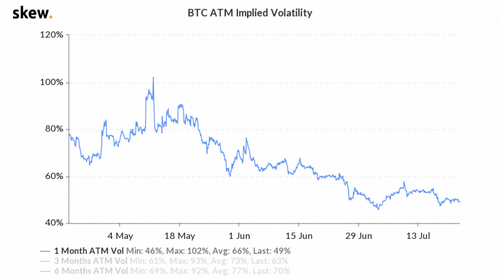 Volumes in July on spot exchange Coinbase continue to be weak as well, which makes things tougher for traders. “As liquidity dries out it becomes more difficult for large participants to take positions on the market without leaving a large footprint,” Pavageau added. 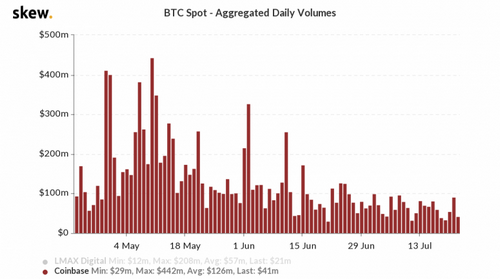 Bitcoin’s market conditions haven’t changed in the past week, according to Sasha Goldberg of Toronto-based brokerage Global Digital Assets. “I don’t see anything special –  still in the same range as a week ago. I don’t see any bullish or bearish signs,” he said.

ExoAlpha’s Pavageau points out Ethereum is still taking the spotlight away from bitcoin. “Gas fees on Ethereum are increasing daily since the DeFi ecosystem boom in June, highlighting a clear interest for a fast-growing ecosystem and a continuous capital inflow.”

The stablecoin’s popularity is growing quickly; dai supply increased by over 40 million since July 17th, according to data aggregator Coin Metrics. 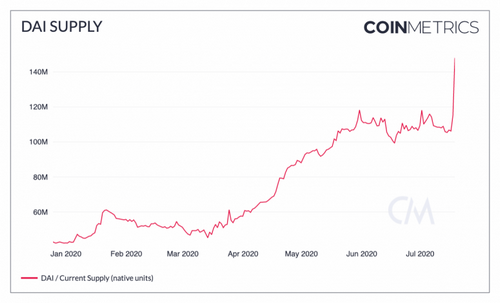 The increase in dai coincides with volumes jumping on the stablecoin exchange Curve, helping the market approach $200 million in volume per day, according to aggregator Dune Analytics. 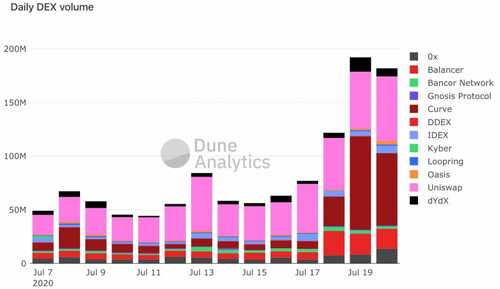 DEX volumes the past two weeks

Opportunities with the new yEarn project, which utilizes dai and is traded on Curve, is likely contributing to the increased interest, yield farmer ‘devops199fan’ told CoinDesk via Twitter. “yEarn by Andre Cronje recently released their governance token YFI. It uses Curve under the hood for two-thirds of its pools.”