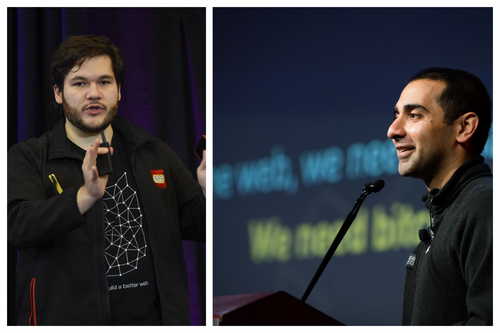 In the American epic, Lonesome Dove, by Larry McMurtry, there are two characters who can see much further than the other members of their gang: Captain Gus McCrae and Joshua Deets. McCrae’s co-captain, Woodrow Call, and their fellow cowboys learn to take Deets and McCrae at their word when they say they see something out where the Earth bends.

Listening to Filecoin founder Juan Benet is like that.

When he’s really trying to peer into the future of the internet, what he sees is hazy and chimerical, but he’s seeing something, anticipating either what must be built or the consequences of inaction.

This stood out Wednesday night when Benet shared the Zoom stage with Ethereum creator Vitalik Buterin and former Coinbase executive Balaji Srinivasan, both of whom are strong futurists.

The conversation, sponsored by HackFS, ETHGlobal and Protocol Labs, was billed as a “debate,” but one had to wonder what these fellow travelers down blockchain’s volatile highway would actually disagree about.

To state the low-energy dispute simply, Srinivasan is focused on urgently shaking up the information distribution system, whereas Benet is more worried about people ever trusting anything they don’t see themselves. That is: verification of source material.

“[People] don’t have a good mechanism for achieving truth,” Benet said. “That is a much worse state than where we are now, and that could be precipitated by centralized or decentralized media not taking these problems seriously.”

Srinivasan strongly advocates that superusers of social media gradually exit networks like Twitter and start reverting back to their own blogs again.

He’s been focused on this for months (see “This Week in Startups” from April and his keynote at Messari’s Mainnet virtual conference in June). More recently, he described how Twitter users could build a minimum viable product for monetizable distribution from their own web domains.

“Decentralized media also means if you give individuals the ability to monetize on their own, potentially pseudonymously, there’s less pressure for them to be part of an intellectual orthodoxy where they have to repeat certain nostrums to retain their job in an uncertain environment,” he argued. The successful Substack newsletters are the ones that stand out for their originality, he said.

But Benet is not as ready to dismiss the practice of reporting as decisively as Srinivasan. He said:

“The entire history of journalism is filled with incredible important advances and improvements that came simply because there was a series of articles that caused an important change to happen. So just recalling that that’s the point, and even though right now the entire media incentive structure is kind of messed up, both in traditional media and social media, let’s figure out how we can build a system that promotes that.”

For his part, Buterin went straight to the problem of social media, though, describing what he felt like everyone believed Twitter to be, the great “water cooler” where all kinds of people could chat and cross over tribal lines.

It sort of started that way, but that’s not where it ended up. “All of these different tribes that really disagree with each other are really yelling at each other and it’s not at all clear that the result is better,” Buterin said.

Srinivasan praised Facebook, Twitter and others for taking buggy services and making them available to the masses, for free.

But that all came at a cost, he argued.

“There’s an election happening every day on Twitter, and this is literally how policy is happening,” Srinivasan said. “Twitter is not always real life but it will be and it becomes real life.”

Benet wants to see these networks disrupted, but he also thinks that with every new experiment on the distribution side we accrue a bit more technical debt on the validation side. Distribution of information is light years ahead of where it was in the 1980s, but, he said:

“Part of what’s happening now is we didn’t put in any way of controlling for manipulation vectors and attack vectors in the entire stack. We’ve created a set of systems that can balkanize not around access or thought but rather balkanize on manipulation targets. It’s very easy for attackers to divide the network.”

A core of this problem is disinformation campaigns that trick people into believing things about the world that aren’t true, in such a way that the untruths persist even when they are repeatedly debunked.

Benet is skeptical about future experiments in social media if they don’t happen alongside even more aggressive experiments in the verifiability of data and information.

“A number of the first-order suggestions for most decentralized media … will make that problem orders of magnitude worse, not better,” he said. “So I think in order to succeed here, we have to look ahead of those problems and start talking about those larger issues of how do you get to systems that are attack-resistant, and that enable some distributed notion of getting to truth.”

Srinivasan is also thinking seriously about the truth problem. He talked about two concepts: oracles and advocates.

Oracles are cryptographically signed data feeds that prove their provenance and the fact that they haven’t been tampered with. Advocates represent a proposal for machine-readable statements about perspective, a sort of “robots.txt” file for ideology, that would allow search engines and readers to understand the disposition of any writer as a way to characterize the arguments they make.

“I like where a lot of that is headed,” Benet said. “I think there’s a massive problem in just establishing truth.”

In a TEDxSanFrancisco talk in 2016, Benet said the internet is “the planet’s most important technology.” But even then he felt it could be much better.

On Wednesday, it was clear he was still only at the beginning of some very complex ideas about the future.

Benet spoke about using natural language processing to find ways to turn human speech into structured data, so factual data could be extracted from claims.

He also talked about the need for a way to describe “the scaffold of claims,” that is to look back in an organized fashion at the prior claims any given new claim is based on. This would help humans or machines go backward to identify the truth or non-truth of any particular argument.

Benet’s talking much more about the technical stack the web is built on here than he is about companies or business models. Almost everything on the web so far has been built on Linux, Apache, MySQL and Python, or versions thereof. That’s the stack. Benet thinks there could be a future where a universal data store of some kind is a part of that stack, one that many websites can draw from.

“My impression is we are headed to a much better future where the data structures are going to be decoupled from the [user interfaces],” Benet said. “There will be many different systems built atop the same information graph.”

And this was a point where Srinivasan agreed.

It’s a crude version of it, but on some level Bitcoin already is what Benet is describing. It’s a shared database about the truth, only in Bitcoin’s case that truth extends no further than who owns which unspent transaction outputs.

It’s a start, though, and one Srinivasan noted the wider world doesn’t really appreciate. He said:

“I think something that is massively still underappreciated by folks outside our space is the extent to which something like that already exists, in the sense that Coinbase and Binance and Blockchain.info … are all different layers over the Bitcoin and Ethereum blockchains.”

So maybe those two blockchains are the Captains McCrae and Call of this Web3 epic, leading us all like cantankerous cattle on the long road to the utopia of a decentralized Montana.

It remains to be seen which of the two will have to carry the other’s corpse back to Texas, where he can give a last look at the burned-down saloon of our past internet, where Twitter played piano and Facebook tended bar.