In the race to become the dominant cryptocurrency platform, Ethereum is gaining on Bitcoin.

Take a look at the market capitalization of ether, the native token of the Ethereum blockchain. Currently, the value stands at about $26 billion. But that figure doesn’t include all of the digital assets built atop the Ethereum blockchain, including some of this year’s hottest tokens: stablecoins like tether and USDC and altcoins like Crypto.com’s CRO, Chainlink’s LINK, Compound’s COMP and Kyber’s KNC.

The combined value of those ERC-20-standard tokens is also around $26 billion, according to the data provider Messari. That puts the market capitalization of the Ethereum ecosystem at more than $50 billion – closer to bitcoin’s $170 billion than if ether were considered alone.

The comparison shows how the rapid pace of development this year on Ethereum has brought the blockchain’s ecosystem closer to challenging Bitcoin. The value gap narrowed over the past month as bitcoin’s price stagnated, while demand for stablecoins and a flurry of activity in “decentralized finance,” known as DeFi, has ignited the value of Ethereum and the tokens that depend on it.

Messari, a digital-asset data firm, said in a report that the Ethereum blockchain’s daily settlement value recently surged to about $2.5 billion, surpassing Bitcoin’s for the first time since at least early 2019.

“Ethereum has blown past Bitcoin,” Ryan Watkins, a Messari analyst, wrote in the post on Monday. “With the increasing amount of economic activity taking place on Ethereum, this trend is unlikely to reverse anytime soon, if ever.” 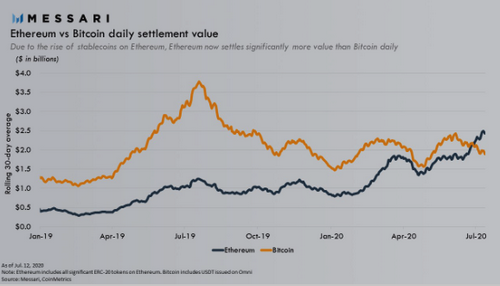 Chart of daily settlement value on the Ethereum vs. Bitcoin blockchains.Source: Messari

It’s the latest chapter in the competition among projects to attain critical mass in the cryptocurrency industry. For entrepreneurs and investors in the space, the goal is to establish networks and projects with enough name recognition, credibility and functionality to scale quickly if and when mass adoption comes.
Bitcoin, the oldest and largest cryptocurrency, attracted most of the hype early in 2020 as some analysts predicted a once-every-four-years event known as the blockchain’s “halving” could send prices to $90,000. Bitcoin got another bluster of endorsements as the spreading coronavirus slammed the global economy, sending traditional markets plunging and prompting the Federal Reserve and other big central banks to create trillions of dollars of fresh money.

Many investors predicted that the money injections would debase the dollar’s purchasing power, driving up the price of bitcoin. Yet over the past couple months, bitcoin’s price has stagnated below $10,000, and even its notorious volatility has withered – prompting fickle crypto traders to seek faster-moving action.

Bitcoin has been stuck in a tight trading range for weeks,  boring for a market that used to be known for its thrills. However, there are signs Tuesday that an expected big move may be building.

Steve Ehrlich, CEO of publicly traded cryptocurrency brokerage firm Voyager Digital, says bitcoin has accounted for about 15% of trading volumes so far in July, down from about 60% prior to the May halving.

“We’ve seen a tremendous change in our retail customer behaviors,” Ehrlich said Monday in a phone interview. “When bitcoin is extremely flat in the marketplace, people are looking at other tokens.” 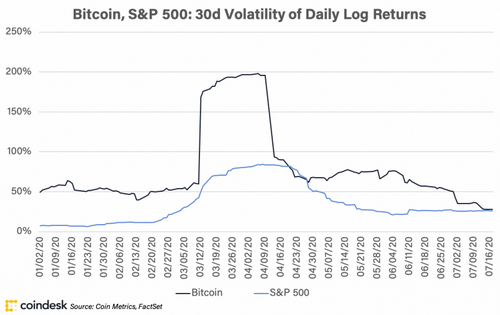 Chart showing how bitcoin’s volatility has declined in recent months to that of the Standard & Poor’s 500 Index of U.S. stocks. Source: CoinDesk Research

In terms of name recognition and popularity outside of the crypto industry, Bitcoin still dominates. According to a report last week from the trading platform eToro and data provider The TIE, only four stories about DeFi appeared in June in “non-crypto news sources,” versus some 200 about bitcoin.

“There is a growing realization though that the 2020 DeFi hype may be overdone,” Mati Greenspan, founder of the cryptocurrency and foreign-exchange analysis firm Quantum Economics, wrote Monday in an e-mail to subscribers.

Denis Vinokourov, head of research at the London-based cryptocurrency prime broker Bequant, said that ethereum risks becoming a victim of its own success, activity in the tokens built atop the blockchain are driving up transaction fees.

“This resurgence in the network performance has come with a raft of undesired consequences,” Vinokourov wrote in emailed remarks.

And Jimmy Song, a well-known bitcoin developer and promoter, told the website CoinMarketCap in an interview published last week that he thinks many DeFi projects will fail to live up to their “decentralized” billing because “they almost always have to have some sort of back door in case something goes wrong.”

“It’s really just a form of gambling with limited upside for people that aren’t in control of the protocol,” Song said.

For now, though, the Ethereum ecosystem is edging closer.

Jack Tan, of Taiwan-based quantitative firm Kronos Research, told CoinDesk’s Daniel Cawrey that he sees ether hitting $500 by the end of this year. That would more than double ether’s market capitalization, to say nothing of any potential increases in the value of ERC-20 tokens.

“Ethereum the platform has done its job,” the cryptocurrency investment firm Arca wrote Monday in a weekly blog post.

Traders are apparently doing their jobs too – following the action.

Trend: Bitcoin is showing signs of life on Tuesday with prices trading above $9,340 at press time, representing a 1.9% gain on the day. Notably, the cryptocurrency hasn’t witnessed an over 1% move since July 9.

The 4-hour chart shows the cryptocurrency has broken higher from the four-week-long narrowing price range. The breakout is backed by an above-50 or bullish reading on the relative strength index. Meanwhile, the MACD histogram is printing higher bars above the zero line, a sign the upward move may gather pace.

The immediate resistance at $9,480 – a lower high created on July 9 – could be put to test over the next few hours.

Acceptance above that level would confirm a Bollinger band (volatility indicator) breakout on the daily chart and may yield a rally to $10,000.

The bias would turn bearish if the cryptocurrency finds acceptance under $9,000. However, sellers have failed multiple times in the last two months to establish a foothold below that psychological support.