Haseeb Qureshi is a managing partner at Dragonfly Capital, a cross-border crypto venture fund. A longer version of this post is here.

Imagine a college friend reached out to you and said, “Hey, I have a business idea. I’m going to run a market making bot. I’ll always quote a price no matter who’s asking, and for my pricing algorithm I’ll use x * y = k. That’s pretty much it. Want to invest?”

Well, turns out your friend just described Uniswap. Uniswap is the world’s simplest automated market maker (AMM). Seemingly from nowhere, it has exploded in volume in the last year, crowning itself the world’s largest “DEX” by volume.

Since Uniswap’s rise, there has been an explosion of innovation in AMMs. A legion of Uniswap descendants have emerged, each with its own specialized features.

Though they all inherited the core design of Uniswap, they each come with their own specialized pricing function. Take Curve, which uses a mixture of constant product and constant sum, or Balancer, whose multi-asset pricing function is defined by a multi-dimensional surface. There are even shifted curves that can run out of inventory, like the ones Foundation uses to sell limited edition goods. 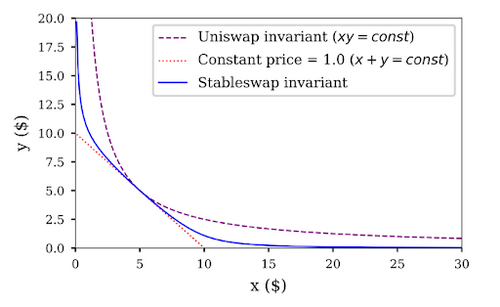 Seeing the growth in AMM volume, it’s tempting to assume that AMMs are going to eat all on-chain volume on DeFi – that they were predetermined to win. But I don’t think this was predetermined at all. In fact, there are several very specific, incidental reasons why AMMs have proven so successful.

Remember: long before we had Uniswap, we had tons of DEXes! Uniswap has decimated order book-based DEXes like IDEX or 0x. Why?

From order books to AMMs

I believe there are four reasons why Uniswap beat out order book exchanges.

First, Uniswap is extremely simple to implement. This means there is low complexity, low surface area for hacks, and low integration costs. Not to mention, it has low gas costs! This really matters when you’re implementing all your trades on top of the equivalent of a decentralized graphing calculator.

This is not a small point. Once next generation high-throughput blockchains arrive, I suspect the order book model will eventually dominate, as it does in the normal financial world. But will it be dominant on Ethereum 1.0?

The extraordinary constraints of Ethereum 1.0 select for simplicity. When you can’t do complex things, you have to do the best simple thing. Uniswap is a pretty good simple thing.

Second, Uniswap has a very small regulatory surface. (This is the same reason why Bram Cohen believes Bittorrent succeeded.) Uniswap is trivially decentralized and requires no off-chain inputs. Compared to order book DEXes that have to tiptoe around the perception of operating an exchange, Uniswap is free to innovate as a pure financial utility.

This is critical, because much of the liquidity on Uniswap is provided by a small set of beneficent whales. These whales are not as sensitive to returns, so the one-click experience on Uniswap makes it painless for them to participate. Crypto designers have a bad habit of ignoring mental transaction costs and assuming market participants are infinitely diligent. Uniswap made liquidity provision dead simple, and that has paid off.

The last reason why Uniswap has been so successful is the ease of creating incentivized pools. In an incentivized pool, the creator of a pool airdrops tokens onto liquidity providers, juicing their LP returns above the standard Uniswap returns. This phenomenon has also been termed “liquidity farming.” Some of Uniswap’s highest volume pools have been incentivized via airdrops, including AMPL, sETH, and JRT. For Balancer and Curve, all of their pools are currently incentivized with their own native token.

In 2025, I don’t expect AMMs the way they look today to be the dominant way people trade anymore. In the history of technology, transitions like this are common.

But there’s an additional dimension to incentivized pools. They have allowed AMMs to serve as more than mere market makers: they now double as marketing and distribution tools for token projects. Via incentivized pools, AMMs create a sybil-resistant way to distribute tokens to speculators who want to accumulate the token, while simultaneously bootstrapping a liquid initial market. It also gives purchasers something to do with the token — don’t just turn it around and sell it, deposit it and get some yield! You could call this poor man’s staking. It’s a powerful marketing flywheel for an early token project, and I expect this to become integrated into the token go-to-market playbook.

These factors go a long way toward explaining why Uniswap has been so successful. (I haven’t touched on “Initial DeFi Offerings,” but that’s a topic for another day.)

That said, I don’t believe Uniswap’s success will last forever. If the constraints of Ethereum 1.0 created the conditions for AMMs to dominate, then Ethereum 2.0 and layer 2 systems will enable more complex markets to flourish. Furthermore, DeFi’s star has been rising, and as mass users and volumes arrive, they will attract serious market makers. Over time, I expect this to cause Uniswap’s market share to contract.

Five years from now, what role will AMMs play in DeFi?

In 2025, I don’t expect AMMs the way they look today to be the dominant way people trade anymore. In the history of technology, transitions like this are common.

In the early days of the Internet, web portals like Yahoo were the first affordance to take off on the Web. The constrained environment of the early Web was perfectly suited to being organized by hand-crafted directories. These portals grew like crazy as mainstream users started coming online! But we now know portals were a temporary stepping stone on the path to organizing the Internet’s information.

What are AMMs a stepping stone to? Will something replace it, or will AMMs evolve alongside DeFi? I’ll try to answer this question in a future post.