Bitcoin stakeholders were delighted to see green flashes on their screens next to the world’s oldest cryptocurrency Tuesday.

“Bitcoin might be waking up,” said Rupert Douglas, head of institutional sales at London-based crypto brokerage Koine. “A close above $9,600 would be a strong sign.”

Some are just happy to see prices go up in the bitcoin market, which has lacked activity for much of July.

“Nice to finally see a bit of movement,” said Douglas Bilyk, a director at New York-based crypto brokerage Copper. “With lower volumes, it doesn’t take as much to push it, and looks like the initial move was up. Now we just need to see some follow-through.”

Gains in the equity markets appear to have been the catalyst for bitcoin’s positive trading day. “Bitcoin seems pretty correlated to equities at the moment,” Koine’s Douglas told CoinDesk. “The test will be whether BTC can hold up if equities sell off.”

Stock indices have been outperforming bitcoin in July. However, Vishal Shah, an options trader and founder of derivatives exchange Alpha5, points out that flat markets for the oldest cryptocurrency sometimes can occur.

“This lull isn’t uncharacteristic of bitcoin; it spent most of Q1 2019 in a sideways market,” he said.

“Expectations are always running high for performance. And though it’s a well-run narrative by now, bitcoin has a tendency to exhibit a high volatility; things will move again,” Shah added.

Ethereum-powered decentralized exchange (DEX) Curve Finance is seeing huge growth in volumes this past week. Curve, at $70 million in volume over the past 24 hours, has overtaken bellwether DEX Uniswap as decentralized finance (DeFi) heats up. 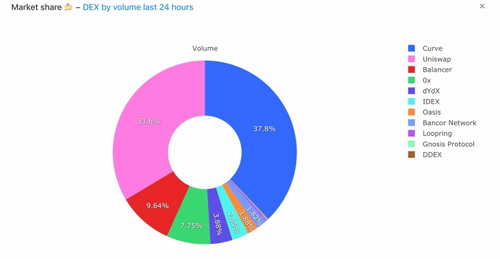 “It is probably a bit of interest picking up in non-bitcoin assets that are becoming multifunctional or yield-enhancing,” said Neil Van Huis, director of institutional trading for Chicago-based liquidity provider Blockfills.

“They are using a mathematical equation which makes slippage very low,” Brukhman said.