Thursday was an up day for both bitcoin and ether prices.

Bitcoin prices rose for a third straight day to its highest price in a month, reaching $9,686 Thursday. George Clayton, managing partner of New York-based Cryptanalysis Capital, expects it to go much higher. “We are bullish and higher prices are better for us, but the rise is really no big deal,” he said.

Constantin Kogan, partner at crypto fund of funds BitBull Capital, pointed out The Fear and Greed index added 5 points at once and is in the “greed” zone.  “Bitcoin has risen above the psychologically important $9,500 mark. This indicates a positive sentiment from investors,” Kogan told CoinDesk.

A short squeeze in the cryptocurrency derivatives market may have helped to accelerate the price rise. Over the past week, some $61 million of short positions were liquidated, outweighing the $18 million of long liquidations on derivatives exchange BitMEX. As the short sellers got squeezed, bitcoin moved to $9,400 Tuesday, and then over $9,500 on Thursday. “Big levels are being tackled,” said Vishal Shah, an options trader and founder of derivatives exchange Alpha5. 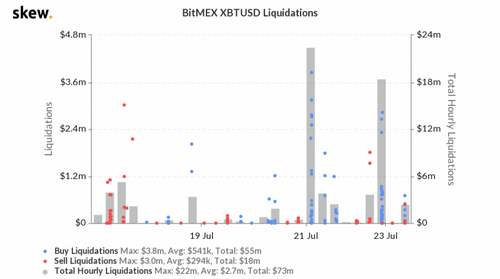 BitMEX bitcoin liquidations over the past week.Source: Skew

Adi Yona of algorithm trading firm Efficient Frontier noted payments companies like PayPal jumping on the cryptocurrency bandwagon as more bullish sentiment. “Bitcoin has jumped in its last move. Paypal’s 325 million users could buy and sell bitcoins. This could have a major impact on volume and pricing as the crypto markets open up to new populations.”

BitBull’s Kogan also noted the performance of gold Thursday. Gold is nearing an all-time high, up 0.57% Thursday, at $1,882 per ounce. “Both bitcoin and gold almost completely won back their losses after the March dip in price,” he said.

Total value in DeFi over $3 billion

The total value locked in decentralized finance (DeFi) surpassed the $3 billion mark July 21, according to information from aggregator DeFi Pulse. The total value, at $3.37 billion Thursday, has quintupled since the start of 2020.

Value locked in DeFi the past year.Source: DeFi Pulse

Stablecoin project Maker leads DeFi projects with $718 million in value locked. Lenders Aave and Compound follow with $560 million and $547 million, respectively. Decentralized exchanges (DEXs) Synthetix, with $483 million locked, and Curve, with $342 million locked, round out the top five. Of the top 35 projects on DeFi Pulse, only Bitcoin’s Lightning Network, with $9.4 million in total value locked, is not built on the Ethereum platform.