XRP climbed to $0.2425 to hit a monthly high as bulls established control with a 10% upside

Crucially, the uptrend means bulls have breathing space above the $0.23 level and can now target the three-month high of $0.2428, and above that, the psychologically significant $0.25.

The next target after this would be February highs at around $0.34.

The upturn in the price trajectory of the Ripple token comes as Bitcoin hit an uptrend that has seen analysts project a run to highs of $14k within the quarter.

Over the past five days, the price of Bitcoin has spiked from around $9,600 to highs of $11k, adding about 16% to its trading value. Ripple has also surged over the period, rising nearly 9% in the past 24 hours and more than 20% in the past week.

Ripple’s market cap has risen to $10.8 billion to see the cryptocurrency retake the third spot among the largest cryptocurrencies by that metric. XRP is now above Tether which has a market cap of $10.0 billion according to data from CoinMarketCap.

As of writing, the technical outlook for Ripple suggests a strongly bullish market. The Relative Strength Index is in overbought territory but shows no sign of slowing down, while the MACD is printing a strong bullish divergence.

The XRP/USD pair is also sitting above the upper curve of the Bollinger Band after breaking seller resistance at $0.22 and $0.23. A consolidation phase is likely, with prices swinging within the upper range of the $0.217- $0.242 level. The area is marked by the 23.6% and 50% Fibonacci retracement level that highlights the upswing from lows of $0.20 to highs of $0.2425. 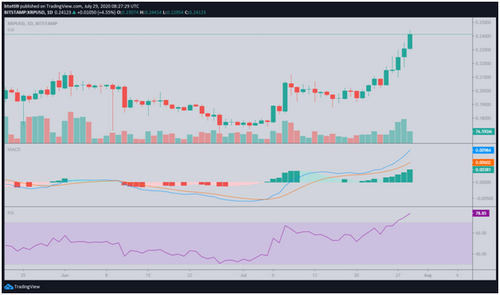 Should price settle above the $0.2428 level, another leg on the swing high could see bulls target a close above $0.25 and set up a fight with the bears for a retest of pre-March 2020 price levels.