The first stage of the next-generation proof-of-stake (PoS) Ethereum 2.0 is now live as of 12:00 UTC Tuesday, according to Beaconcha.in.

A generalized blockchain for decentralizing computer-based applications – from iPhone games to government bonds – Eth 2.0 has been under construction since the genesis of the current proof-of-work (PoW) network in 2015.

Tuesday’s launch concludes the opening act, or “Phase 0,” of Ethereum’s consensus mechanism transition, which will see the network – whose native cryptocurrency, ether, is worth $70 billion by market cap – fundamentally change how it settles payments while in motion.

“The launch of the beacon chain is a huge accomplishment and lays the foundation for Ethereum’s more scalable, secure, and sustainable home,” Ethereum Foundation researcher Danny Ryan told CoinDesk in an email. “There is still much work to do, but today we celebrate.”

The Beacon Chain will be the backbone of a new Ethereum blockchain, a network intended to keep pace with PayPal and Visa in terms of processing speed, while rivaling them in terms of transparency and payment finality. 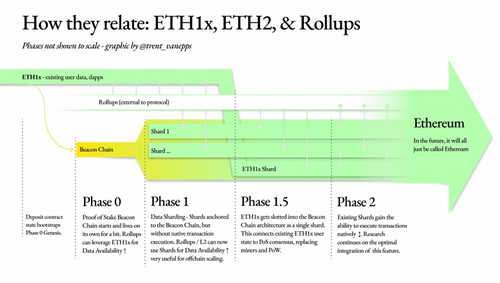 From the Beacon Chain, onwards: Phase 0 launches the proof-of-stake network with multiple technical additions coming down the pike.(Trenton Van Epps)

The Beacon Chain’s near-term functionality is quite limited.

Like the handful of testnets before it, participants in Eth 2.0 now help “store and manage the registry of validators,” according to Ethereum infrastructure provider ConsenSys. Yet, accounts and transfers remain locked until at least Phase 2 while the Eth 1.x blockchain continues in parallel. In other words, Eth 2.0 won’t be usable for paying your electric bill until 2022 at the earliest.

Ethereum is the creation of Russo-Canadian developer Vitalik Buterin, also the founder of Bitcoin Magazine and member of multiple early alternative currency projects such as Mastercoin. First announced in 2013 at a Bitcoin conference in Miami, Florida, Buterin envisioned a network capable of leveraging Bitcoin’s blockchain architecture for purposes larger than just a digital currency – well outside the bounds of pseudonymous bitcoin developer Satoshi Nakamoto’s original intent.

As demonstrated in his early writings on the subject, Buterin argued a PoS consensus mechanism would be central to this new type of blockchain. Buterin has long held that PoS offers higher security guarantees in the long term than Bitcoin’s mining-based PoW blockchain. Many Ethereum developers also favor PoS over Bitcoin’s PoW due to environmental concerns.

Under the auspices of the Ethereum Foundation, Eth 2.0’s central specification written by Buterin and other developers was coded into multiple programming languages in what are called clients.

The decision to program Eth 2.0 into multiple languages remains a chief reason for its patient advance towards launch. Indeed, Ethereum developers have shifted timelines throughout the last five years to many investors’ frustration.

Tuesday’s launch, however, is the culmination of not only years of sustained blockchain research, but a more recent push goaded by investor anxiety. A perceived lack of development reached a fevered pitch this past summer as further delays put the Beacon Chain’s 2020 launch in question.

The Ethereum community’s expectations were “loud and clear,” Ethereum Foundation researcher Justin Drake said in a July tweet, setting “Phase 0 genesis in 2020” as the goal. As of Tuesday, that goal has been met.

A flurry of client activity followed Drake’s tweet in preparation for a mainnet launch: the Medalla testnet on July 22, followed by Spadina and Zinken in late September and early October, concluding with Pyrmont’s deployment on Nov. 18.

The long-awaited deposit contract for Eth 2.0 was released Nov. 4 by the Ethereum Foundation after one further October delay, with a targeted genesis date of Dec. 1. For once, Ethereum was on time.

In order to launch, the deposit contract needed 524,288 ETH seven days before the genesis date. Although large quantities of ETH were put into the contract, including some $1.4 million by Buterin himself, it took the better part of two weeks to fill the contract.

However, the contract’s conditions were satisfied Nov. 23 – nearly six years to the day of Ethereum’s first Devcon conference in Berlin, developer Lefteris Karapetsas pointed out on Twitter. 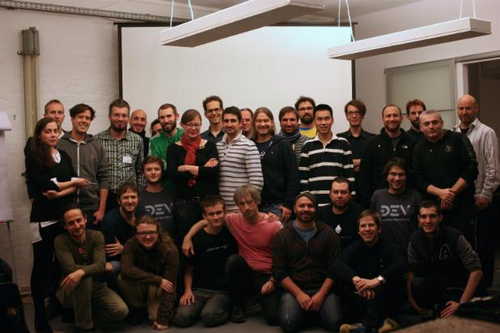 A final week gave clients an additional buffer to adjust any last-minute specifications. As of publication, 880,992 ETH worth some $542.7 million is currently locked in the deposit contract, according to CoinDesk price data.