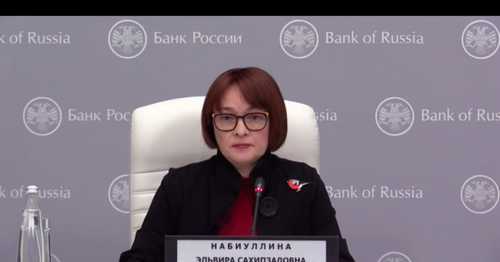 The Bank of Russia doesn’t believe a digital ruble will hurt its banks.

Earlier this month, Russian banks warned the Bank of Russia that the digital ruble under discussion might weaken them if people pull their funds to rush into the new system. Introducing the digital ruble into Russia’s financial system might cost the country’s banks up to 25 billion rubles (~$34 million), according to Sber, Russia’s largest retail bank and the most vocal critic of the current approach to the central bank digital currency (CBDC).

The Bank of Russia’s chairwoman, Elvira Nabiullina, shrugged off these concerns during a press conference on Friday.

“We don’t see this [digital ruble launch] leading to any significant funds outflows or changes,” she said.

Last week, Sber calculated that banks might lose up to 4 trillion rubles (~$54 billion) in liquidity in the first three years once the project launched. As a result, the money-strapped banks would have to increase interest rates about half a percent and restrict loans for retail as well as small businesses.

Nabiullina was skeptical about this estimate, saying, “I’m not sure where these numbers are coming from,” and adding that interest rates would not be affected by the digital ruble but by inflation rates and general monetary policies.

“If for some reason, unrelated to the digital ruble, banks experience a liquidity shortage, we have tools to fix that,” Nabiullina said.

Echoing Sber’s sentiment, the National Council of Financial Market (NCFM), the Russian banks’ trade group, said in its letter to the Bank of Russia this week that an outflow of money from banks to the digital ruble system would make banks less stable and more dependent on loans from the central bank. (CoinDesk read the letter.)

To prevent that, the NCFM recommends something similar to China’s digital yuan model, where the central bank would open digital ruble accounts for commercial banks, which will manage the digital rubles of retail users as part of their balance sheets.

A similar model has been proposed by Sber’s Popov during a recent Zoom conference with the Central Bank. However, the regulator did not seem open to this approach.

Russia’s financial regulator outlined the possible launch scenarios for the future central bank digital currency (CBDC) a few months ago in an analytical report. Most of these scenarios scare the country’s banks, the public discussion shows.

The Bank of Russia seemingly favors a centralized model in which the regulator will be the administrator of the system and the banks will help onboard users, which the banks don’t like.

In an open Zoom call with the regulator, several of Russia’s financial institutions voiced concerns that banks will be obliged to use their own budgets to integrate the digital ruble system and get no business upside. Further, the Bank of Russia could become a new government-backed mega-bank, while other banks will have to compete with it for Russian people’s money.

The Bank of Russia’s report does not really explain why the country might need a CBDC at all, says Vladislav Martynov, adviser to the Russian Cryptocurrency and Blockchain Association (RAKIB). He is also a member of the Ethereum Foundation and one of the earliest blockchain advocates in the country.

“The Bank of Russia would prefer not to bother about the digital ruble too much, but there is a movement [of CBDCs] around the world, central banks are working on concepts and the Bank of Russia can’t just sit around doing nothing,” Martynov said.

In these circumstances, the regulator viewed the launch of a CBDC as a chance to consolidate yet more power in the Central Bank, Martynov believes.

“The spirit of the published report is very conservative: it’s about creating a new powerful monopoly, a new state bank that will be dominating the market while the role of commercial banks will be diminished” he said, referring to the Bank of Russia being a single administrator of digital rubles.

Another concern is that digital ruble adoption will be forced through in a top-down way, and government-controlled companies will be obliged to use it. Previously, this happened to the National Card Payment System (NSPK), Russia’s homegrown alternative to Visa and Mastercard.

NSPK was created in order to keep the Russian economy going in case a new round of sanctions cut the country off from global payment networks – a threat that felt real several years ago. State-owned companies were obliged to issue NSPK cards, called Mir, to their employees.

“We saw how the Mir cards were forcibly rolled out,” Martynov said. “So if they set a goal to [to roll out the digital ruble], they will see it achieved.” He added that the Bank of Russia, apparently, wants to get as many people using the digital ruble as possible.

A forced “mass adoption” of the digital ruble might become as disastrous for Russia as the enormous experiments of the USSR, like the nation-wide anti-alcohol campaign by Mikhail Gorbachev or the river reversal project, Martynov believes.

To be sure, the regulator hasn’t yet decided if the digital ruble will even happen at all. Since publishing the report, the Central Bank has been gathering public feedback, and will do so until Dec. 31. Nabiullina previously said that if the regulator does decide to continue with the CBDC, the first pilot might take place at the end of next year.