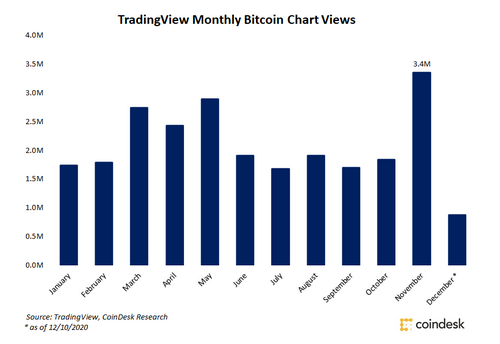 Bitcoin traders stared at price charts over 3.4 million times in November, watching the leading cryptocurrency pass its record-high price from 2017 late in the month, according to leading charting service TradingView.

In November, bitcoin chart views on TradingView soared 82% from the previous month with similar growth seen in charting of other cryptocurrencies, per user data shared exclusively with CoinDesk.

“BTCUSD has consistently been the most popularly viewed symbol this year,” said David Belle, the company’s U.K. growth director, in an email to CoinDesk, referring to bitcoin and the U.S. dollar. TradingView supports price charting tools across stocks, futures, foreign exchange, cryptocurrency and other markets.

“What we’re seeing is that currently there’s simply a massive amount of interest in bitcoin,” Belle said.

Beyond charting, rapid growth in attention paid to bitcoin is seen in the use of other products and services including record buying volume on the retail-focused product CashApp by Square along with strong demand for new services like PayPal’s cryptocurrency features.

Bitcoin chart views on TradingView are still down roughly 50% from the record highs set in late 2017. But since launching support for bitcoin and other cryptocurrencies in 2016, TradingView’s charting tools have been widely integrated across almost every leading cryptocurrency exchange.

Bitcoin’s price has cooled off a bit in December, dipping about 10% from its monthly open of above $19,700 on Coinbase. “The current price does seem a little different to 2017,” Belle said. “I’d argue it’s because it’s less of a price discovery phase and the market is less infant than in 2017.”