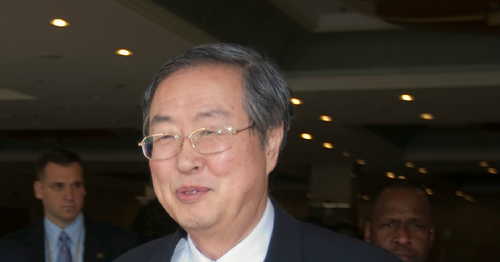 A former governor of China’s central bank believes the digital yuan won’t upset the order of the global monetary system.

According to a report by the South China Morning Post on Sunday, Zhou Xiaochuan told attendees at the Shanghai Financial Forum that China’s digital currency electronic payment (DCEP) initiative shouldn’t be perceived as “great power chauvinism.”

Rather than threaten other nation’s currencies, DCEP will instead promote cross-border trade and boost the yuan’s international status, according to Xiaochuan.

“We are not like Libra and we don’t have an ambition to replace existing currencies,” he said, referring to the Facebook-initiated payments token that recently rebranded to Diem and is slated for launch early next year.

The DCEP is China’s proposed centralized digital payments system – an official yuan-pegged token to be issued by the People’s Bank of China (PBoC). While a number countries have begun exploring and developing central bank digital currencies, China’s efforts represent the most advanced effort to date from a major nation, with the potential to be used by billions of people.

The former PBoC governor also said if people were “willing,” the digital yuan could be used for trade and investment, but also flagged the sensitive nature and power of its utility on the world stage.

“Some countries are worried about the internationalization of yuan,” Xiaochuan said. “We can’t push them on sensitive issues and we can’t impose our will.”

China, he continued, hopes to persuade consumers and overseas merchants to eventually accept digital yuan payments. The nation has learned from lessons the intense pushback from regulators and governments that Libra has seen since it was first proposed in 2019, Xiaochuan said.

China’s DCEP would also offer an alternative to credit cards or payment services like Alipay and WeChat Pay. While those systems can already manage foreign exchange transactions, they are “often not real-time or transparent,” he said.

“If the currency exchange is realized at the moment of a retail transaction and there is oversight of that exchange … it brings new possibilities for interconnection,” Xiaochuan said. With the digital yuan “the problem of cross-border remittances is easily resolved.”