“Upward price action seems to stall, and our analysts believe more inertia is required to push bitcoin beyond the $20,000 psychology barrier,” Lennard Neo, head of research for the cryptocurrency investment firm Stack Funds, wrote Thursday in a report.

In traditional markets, European shares were lower even after the European Central Bank boosted the size of an emergency bond-buying program to combat the economic toll of a resurgent coronavirus. U.S. stock futures pointed to a lower open. Gold rose 0.3% to $1,843 an ounce.

It’s becoming tougher to get through a rundown of each day’s news without finding a story or several about economic stimulus.

U.S. headlines are filled with incremental developments on lawmakers’ push to hammer out a new government stimulus package by the end of the year. Only the details change from article to article. Is it $908 billion or $916 billion? Will there or won’t there be a new round of $1,200 stimulus checks? A CNBC article on Wednesday mentioned the possibility of $25 billion in rental assistance. Liability protections for businesses? Unresolved.

What’s clear is just how dependent the stock market has become on further stimulus for further gains. “Wall Street falls on stimulus stall,” read the headline on Reuters’ stock-market wrap Wednesday. And because the stock market’s performance is in some way connected to hundreds of powerful billionaires’ fortunes, millions of Americans’ retirement savings and scads of politicians’ futures, it seems unlikely that more stimulus wouldn’t be forthcoming – not to mention the pressing need to actually provide stimulus to an ailing economy and millions of jobless people.

All this matters to bitcoin traders, or course, because the cryptocurrency has suddenly become in vogue among big investors from traditional finance as a way of hedging against trillions of dollars of fiscal and monetary stimulus that could theoretically debase the U.S. currency, boosting the value of dollar-denominated assets.

“As recently as 2017 bitcoin could be viewed largely as a speculative instrument but this is no longer the case,” Gavin Smith, CEO of the cryptocurrency financial firm Panxora, said in an email. “The bitcoin of today has become a store of value that is used in times when people fear currency devaluation.”

Even Wall Street’s starting to agree, with pronouncements on bitcoin’s growing stature emerging Wednesday from the likes of JPMorgan and Morgan Stanley. 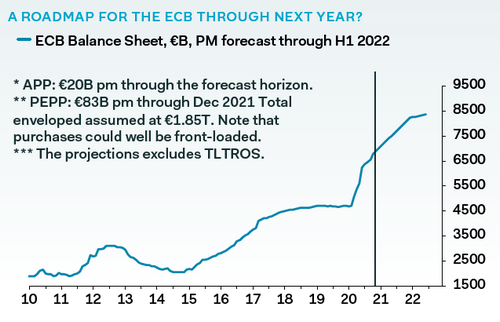 Size of ECB balance sheet, with Pantheon’s forecast through 2022.

On Thursday, the stimulus watch shifted to Europe, where monetary policy makers have just announced their latest plans to revive the coronavirus-stricken economy.

The European Central Bank, led by President Christine Lagarde, said Thursday that it would increase the size of the pandemic emergency purchasing program, or PEPP, by €500 billion ($604 billion) to about €1.85 trillion.

“This is a solid package, both in its own right, not to mention that it delivers what markets expected, which is a key signal as well,” Claus Vistesen, chief eurozone economist for the forecasting firm Pantheon, told clients Thursday in an email.

“Assuming a smoothed implementation of the PEPP, this would allow the ECB to buy just under €100B per month between now and the end of the program in March 2022,” Vistesen wrote. “The reality, however, is that purchases will be flexible and front-loaded.”

Such flexibility recalls Federal Reserve Chair Jerome Powell’s pledge as recently as last month to keep pumping fresh money into global markets at the current pace of about $120 billion a month or as needed to “sustain smooth market functioning.”

“In short, the printer keeps going brrrrrrrrrrrr in all the wrong places, to the great delight of investors everywhere,” Mati Greenspan, founder of the foreign-exchange and cryptocurrency analysis firm Quantum Economics, told newsletter subscribers Wednesday.

Investors in bitcoin, whose price is up 160% this year, may be the most delighted. And if Pantheon’s right, the stimulus headlines could continue for at least couple more years. 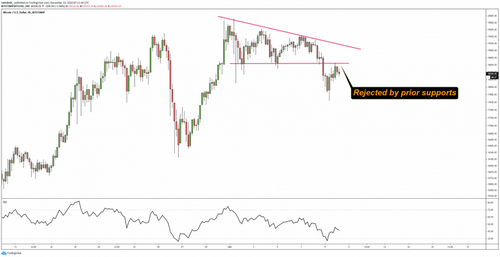 Bitcoin has steadied over the past couple of days. But based on technical analysis, a sell-off earlier this week to as low as $17,640 during Asian trading hours appears to have resulted from a price-chart pattern known as a descending triangle breakdown.

The pattern, typically defined by a series of lower highs and a zone of support forming a baseline, can be seen on the four-hour chart (above). The chart indicates weakened buying pressure above $18,600 after being rejected from the triangle baseline of support near $18,650 during a price bounce on Wednesday.

The cryptocurrency may move to test this zone of support-turned-resistance in a bid to reestablish bullish dominance. A close above $18,650 would likely invalidate bearish confidence in the short term as it makes bitcoin makes its final moves for what has been a tumultuous year.

Yet, Oliver von Landsberg-Sadie, CEO at BCB Group, told CoinDesk via Telegram that while strong support exists at $18,000, any further breakouts heading into year’s end will likely be “tempered.”

Current price levels are likely buoyed by large holders continuing to buy bitcoin. “It is almost certain that companies, banks and other institutions are accumulating BTC in private as well,” Gunnar Jaerv, COO of First Digital Trust, said in an interview via Telegram.