After the past week’s record bitcoin volume for 2020, the price dipped on lower volume. Meanwhile, November’s dip in ether assets locked in DeFi can at least partially be attributed to the Ethereum network’s ambitious 2.0 upgrade.

Bitcoin trading on Bitstamp since Dec. 18.

Bitcoin’s price rode a roller coaster up and down over the past 24 hours. After a steady run above $23,800 in early hours trading, the world’s oldest cryptocurrency dumped as low as $21,960, according to CoinDesk 20 data. The price recovered somewhat to $22,843 as of press time.

Lower-than-average volume led to a thinner-than-usual market Monday as many traders were likely staying on the sidelines with the holidays and new year quickly approaching. 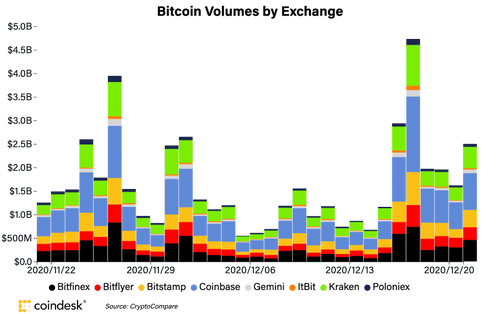 Bitcoin volumes on eight major exchanges tracked by the CoinDesk 20.

After Dec. 17’s combined volume record $4.7 billion day across major exchanges Bitfinex, Bitflyer, Bitstamp, Coinbase, Gemini, ItBit, Kraken and Poloniex, that figure was much lower, down to $2.5 billion as of press time Monday. 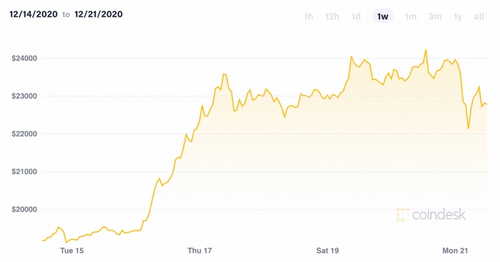 Bitcoin’s historical price the past week.

Despite this, big-time buyers in the over-the-counter market have helped keep bitcoin well above the $20,000 level, first breached back on December 16.

“Real demand from largely price-insensitive institutional buying drove us into that level, and the resulting fireworks we saw on the break came from the leveraged side as roughly half the market’s outstanding leveraged short positions were liquidated,” quant trading firm QCP wrote in an investor note Monday.

On derivatives venue BitMEX, over $44 million in sell liquidations, the crypto equivalent of a margin call, occurred, which put some pressure on the market for bitcoin to head lower. Sell liquidations are triggered when leveraged long positions start losing a significant portion of the money the buyer posted to place the trade. 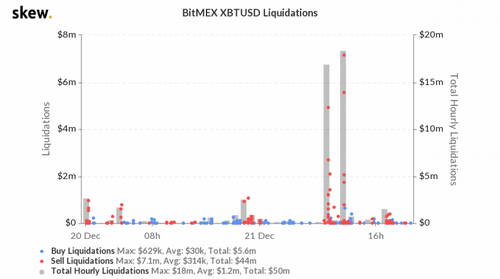 Liquidations on BitMEX the past 24 hours.

“The $20,000 spot level … is now our firm bull/bear line, with $16,000 as our strong support,” QCP Capital said in its investor note. “We are lightening up on selling puts up here, as this week brings our very well flagged Christmas expiry, which is now officially the largest OI on record.”

Open interest, or OI, is loaded up in the bitcoin options market for Dec. 25 expiration, according to data from aggregator Skew. 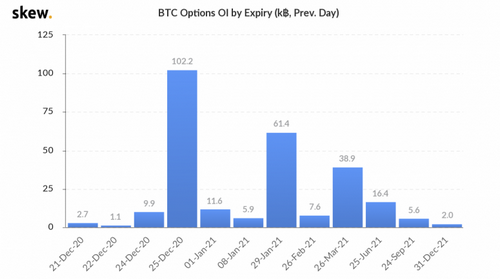 The overhang of options expiration and the declining activity in the spot market may be the largest dynamics to watch for the market in the next several weeks.

“We could be looking at an extended consolidation from here, considering the weak Q1 seasonality and risks associated with the new administration after [U.S. President-elect Joe] Biden’s inauguration in mid-January,” QCP added.

The amount of ether “locked” in decentralized finance, or DeFi, for “yield” or a return in exchange for providing liquidity, hit a high of 9.4 million ETH on Oct. 20. In November, the amount of ether locked dipped as low as 6.7 million before rebounding in December, at over 7.2 million ETH as of press time.

The amount of ether locked in decentralized finance the past three months.

Cooper Turley, editor of newsletter DeFi Rate, told CoinDesk that Ethereum’s 2.0 upgrade dynamics, which also includes staking in the network, played a role in the amount of ether locked, dipping and then recovering somewhat. “People unlocked ETH to stake via [Eth 2.0] and trade it during the recent run-up,” Turley said. “Now that things have settled a bit, most that did not stake into [Eth 2.0] are depositing back into DeFi.”