A mere $1.2 billion worth of bitcoin changed on the eight exchanges tracked by the CoinDesk 20, the lowest level in 10 days. 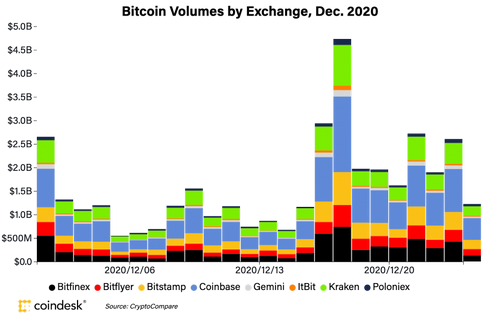 The relative quiet of the holiday season could potentially give way to some downside at the start of the new year, according to technical analyst Katie Stockton, managing partner at Fairlead Strategies.

“Bitcoin is digesting its gains in a consolidation phase after having confirmed its breakout to new all-time highs with its mid-month push higher,” said Stockton. “Former resistance near $19,500 is now initial support. Overbought conditions have not had an impact on momentum,” she said, though that is “perhaps more likely in January, which appears prone to risk-off positioning as it pertains to other asset classes.”

Traders borrowing to buy bitcoin may also end up endangering prices in the not-too-distant future, according to analyst Alex Krüger.

“The crypto market became extremely levered up since the $20K breakout, and implied volatility spiked higher as traders repriced,” Krüger said. “High leverage translates into weaker hands and makes price vulnerable to large corrections. That is why we have been seeing such large two-way price moves since. This is normal given such market dynamics. In such conditions negative news would have an outsized market impact.”

A hint of what’s to come – as early as Friday – may also be found in the derivatives market.

“We will witness the largest expiry in Deribit’s history tomorrow [Dec. 25] as 86,000 option contracts will expire with a notional value of over $2 billion,” said Luuk Strijers, chief commercial officer at Deribit, the world’s largest bitcoin options exchange. About 35% of all options on the exchange will expire Friday, leading them to expect some volatility on Christmas Day. 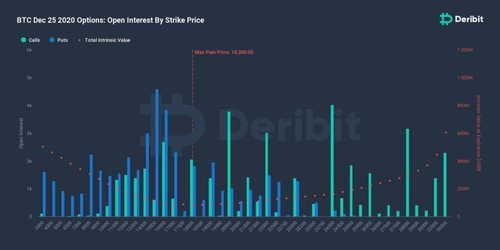 As Deribit defines it, the max pain price is the strike price with the most open interest for puts and calls and the price at which the underlying asset (such as bitcoin or ether) would cause financial losses for the largest number of option holders at expiration.

Thursday also marked the December expiration of bitcoin futures on the CME, with 4,309 contracts changing hands, much lower than the previous day’s 13,829.

All is certainly not quiet, calm or bright for XRP. Its downward slide continued Thursday, with the embattled cryptocurrency taking another 16% hit over the course of the most recent 24 hours. Since Monday, when Ripple Labs CEO Brad Garlinghouse gave the heads-up that the Securities and Exchange Commission was going to file an action claiming that XRP is a security, the cryptocurrency lost more than half its value. While still the third-most valuable crypto, according to CoinDesk 20 data, its market cap is now back down to $26.6 billion, roughly where it was in early November. 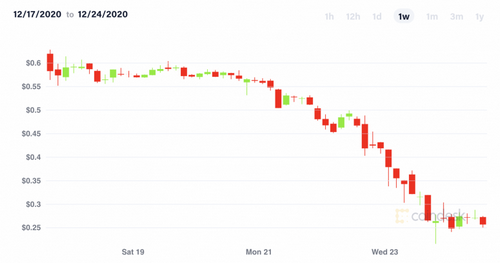 On the heels of XRP’s troubles, bitcoin’s share of the total crypto market has increased to nearly 69% from 65% in just the past week, according to data compiled by CoinMarketCap.

For those tracking decentralized finance, the amount of ether locked in DeFi contacts remains just shy of 7.3 million ($4.3 billion worth), according to data site DeFi Pulse. 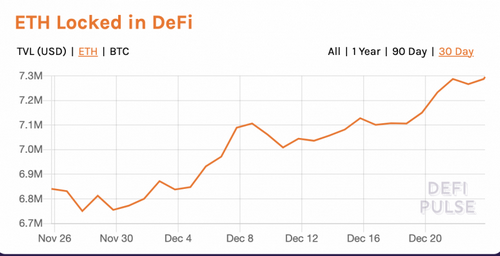