“For the first time in history, privacy and personhood are both mediated digitally … [I]t’s really hard to be a person without being digital, without exchanging data, without passing data.”

The comment reminds us of what’s at stake as we debate the data-monopolizing power of the internet’s biggest companies: the future of what it means to be human.

For the first time since the “Internet 2.0” era began at the turn of the millennium, the dominant social media, search and e-commerce platforms are facing existential challenges. The disruption could come from legal efforts as anti-monopoly lawsuits evolve in both the U.S. and Europe. Or it could come via some nascent alternatives to the platforms’ centralized model, including from blockchain-inspired startups.

Wang, who joined us on this week’s episode of the “Money Reimagined” podcast, says these responses won’t lead to a meaningful alternative until we gain a better appreciation of the role data plays in our internet interactions. Data, she says, “is not just information. Data is relationships.”

The algorithms of Google, Facebook, Amazon and others place the greatest value not in static, simple information points like your name, address and income, but data that reveals your relationships with other people. Their commercial interest in that data creates real tension because, as Wang notes, the story of our social connections is the story of who we are as human beings.

It’s why the “if you don’t like Facebook, just leave” idea is so naive. All over the world, services like Facebook and WhatsApp are must-have tools. They’re how people find jobs, build businesses and stay in touch with their families. People simply can’t just get up and leave.

Yet, those same people are caught in a dependency and have almost zero visibility on how their data is used. It creates an unbalanced economic relationship Wang compares to the idea of the 20th century “company town,” where employees were housed and fed by their employer but had no idea of the real value of their labor.

The “own your data” movement led by people such as Cambridge Analytica whistle–blower Brittany Kaiser is no silver bullet either. Once it’s disaggregated from all those connections and human networks, your data alone is not worth very much. A Financial Times calculator put a person’s basic data at a price of less than a dollar.

Nonetheless, it’s vital to educate ourselves on how we, the people, give up so much in the current relationship.

The imbalance is not just that ad dollars flow to Facebook and Google rather than to the users who generate the content and build the audiences the platforms and their advertisers monetize. It’s that, as detailed in Shoshana Zuboff’s “The Age of Surveillance Capitalism,” we are trapped in an ever-tightening feedback loop in which these companies use our data to modify our behavior. There’s a scary Matrix-like aspect to all this.

It’s why the other guest on this week’s podcast, metaMe CEO Dele Atanda, views his company’s work building a more decentralized, blockchain-powered data marketplace as an exercise in protecting people’s human rights. Creating that marketplace and figuring out a meaningful expression of the value of people’s data is how we will ultimately restore agency over our digital lives, he says. 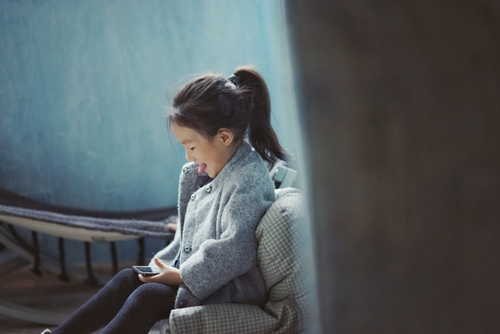 “We need to create a unit of account that we can measure – not just on the basis of size [as bytes] but on the basis of sensitivity, identifiability. These issues are central to how this information can be used to help or harm us,” he said.

Also important, Atanda says, is the governance structure of the database storing the information, which speaks to the potential role for blockchain technology. The more “permissionless” and decentralized the architecture behind the data marketplace, the more confident individuals can be that they retain ultimate rights to their data.

All of this seems pertinent in a week in which society was once again found vulnerable to data failures at centralized systems.

The reason decentralization is worth considering as a potential solution in all these situations is not because it makes things more efficient. Most often, decentralization makes processes more inefficient. (Note also that Google’s systems run remarkably well the bulk of the time.) It’s that we must restore people’s power over their lives, whether it’s in confidently knowing their votes are being accurately counted or that their data is not being sold to and manipulated by the highest bidder.

Decentralized solutions such as blockchains are expensive and complicated. They are definitely not a panacea for the world’s ills.

But they do deserve consideration. Humanity is at stake.

With bitcoin’s spectacular mid-week rally, we were reminded that big round numbers matter to markets. There’s nothing innately special about the $20,000 level, but the price action before and after bitcoin broke above it suggests plenty of people did invest some significance into that number. 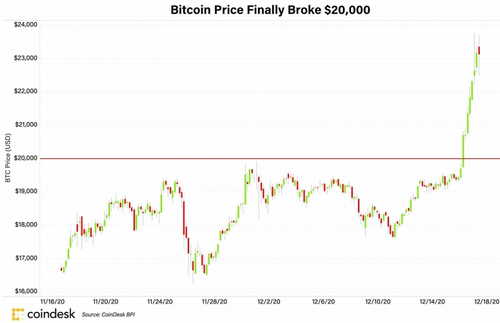 On two separate occasions earlier in the month, bitcoin made a run at the $20,000 level but failed. The second was when it set a new all-time high of $19,920 on Dec. 1, putting an end to the high set during the last big rally at the end of 2017. It seems investors had left loads of sell orders just below $20,000 and some may have been there for at least three years. Every time buyers pushed it higher, those orders kicked in to prevent a higher move.

But look what happened when those sell orders were eventually exhausted. Once buyers had pushed bitcoin’s price through the $20K mark, all that resistance disappeared. A mere 24 hours later it had jumped a whopping $4,000. No doubt sell orders are being placed at levels somewhere up above, but for now bitcoin feels quite unencumbered.

WHEN THE BILL COMES DUE. When I read about a new study authored by Mario Draghi and Raghuram Rajan on behalf of the Group of 30 Consultative Group predicting a post-COVID “solvency crisis,” my first reaction was, “Finally, the powerful are speaking with honesty on the unsustainable stimulus debts governments are racking up.” My second reaction was, “Oh, yeah, Draghi (former president of the European Central Bank) and Rajan (former governor of the Reserve Bank of India), are no longer in positions of real power.”

The details of the report are illuminating. They make clearer the distinction between the kind of eminent person role Draghi and Rajan now occupy and the significant authority they previously held. As Bloomberg’s Paul Gordon writes, “The report acknowledges that its recommendations require ‘hard choices’ – such as winding down broad aid programs and limiting government support to areas where the market is failing – that could cause a political backlash.”

For the last decade, central bankers have been the biggest conduits of “broad aid programs” in the broadest form of all: monetary expansion, even as they called on governments to relieve them of that stimulus responsibility by taking on the more politically challenging exercise of fiscal stimulus. In office, they are circumspect about that criticism. Out of office, they can be more direct. 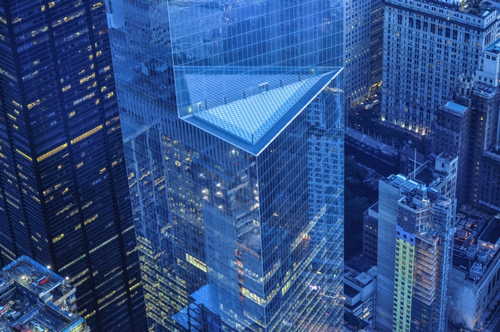 The biggest takeaway from this report is concern. In an understandable effort to stave off economic ruin, governments have gone heavily into debt and allowed monetary expansion efforts to pump up financial assets, which has maintained the illusion of balance inside financial institutions’ and corporations’ accounts. The price for all this will need to be paid and it will probably be paid by further deprecation in the value of fiat currencies against other assets. It’s the backdrop to the “why bitcoin matters” thesis now being voiced by big shot investors like Guggenheim Partners’ chief investment officer Scott Minerd, who on Wednesday pronounced that bitcoin should be worth $400,000.

TWO REALITIES. As bitcoin soars and as U.S. stocks continue marching into new record-high territory, the reality is very different from anyone without access to those kinds of assets. As observed by the folks at Upfina, a refreshingly frank economic commentary site, while hedge fund managers and bitcoin HODLers have gotten fabulously rich, 8 million Americans have slipped into poverty since June. In noting that “the main problem is it is expensive to be poor,” Upfina drills down into why the Federal Reserve’s quantitative easing efforts – buying $120 billion in bonds a month – is helping a privileged class of Americans but doing close to nothing to help the suffering of so many more in this pandemic. It’s hard not believe that a major reckoning with monetary policymaking is coming.