Dogecoin (DOGE) is up by almost 37% following a weekend of massive upsides for various cryptocurrencies. The top digital asset Bitcoin reached a new all-time high of $24,209 on 20 December, while Bitcoin Cash (BCH), Bitcoin SV (BSV), and Dash (DASH) also saw some impressive gains.

Among the top 50 cryptocurrencies, Dogecoin (DOGE) surged 15% on Saturday, then went up 17% on Sunday and has gained 37% at the time of writing.

For the DOGE/USD pair, the enormous move over the past two days coincides with a spike in sentiment after Elon Musk tweeted about the meme coin. The Tesla and SpaceX CEO also changed his Twitter bio to “Former CEO of Dogecoin”, which appears to have catapulted the altcoin into stardom on social media.

It is not clear how far the price will rise after this pump. However, the current outlook suggests DOGE/USD could hit highs around $0.010 short term. 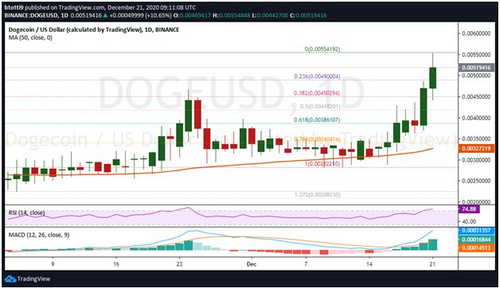 The daily chart has the MACD strengthening within the bullish zone, while the RSI suggests buyers are in control as it increases above 75.  Dogecoin price could climb above $0.006 if bulls break above $0.0056 and hold gains into the daily close. 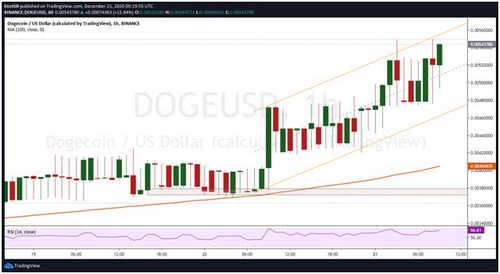 On the hourly chart, DOGE/USD is trading above the 100 hourly simple moving average and looking to strengthen near the upper boundary of an ascending channel.