In 1987, Nobel laureate James Tobin proposed the concept of a retail central bank digital currency. The idea was that central banks should create a public payments “medium with the convenience of deposits and the safety of currency.”

It was a novel idea, which is only recently being taken seriously. Public officials first warmed to it in response to declining cash use in some countries. One early example is Sveriges Riksbank Deputy Governor Cecilia Skingsley, who said in a 2016 speech “the Riksbank should carefully consider meeting the general public’s need for central bank money by supplying this in some electronic form.”

This post is part of CoinDesk’s 2020 Year in Review – a collection of op-eds, essays and interviews about the year in crypto and beyond. Raphael Auer is a principal economist at the Bank for International Settlements’ Monetary and Economic Department.

Spurred into action also by the popularity of cryptocurrencies like bitcoin and announcements of stablecoin projects such as Libra (now Diem), many more central bankers have joined since. And certainly, the declining use of cash during the COVID-19 pandemic has added an extra fillip to this debate.

As a consequence, research and development of CBDCs is now taking place around the world. In recent research we have built a database of all publicly announced CBDC projects. As of end of November 2020, 46 monetary authorities are researching and developing wholesale or retail CBDC (see Figure 1).

Looking just at retail CBDC schemes, four pilots are underway: at the People’s Bank of China, the Eastern Caribbean Central Bank, the Bank of Korea and Sveriges Riksbank. One CBDC project – the Sand Dollar in the Bahamas – is already live. 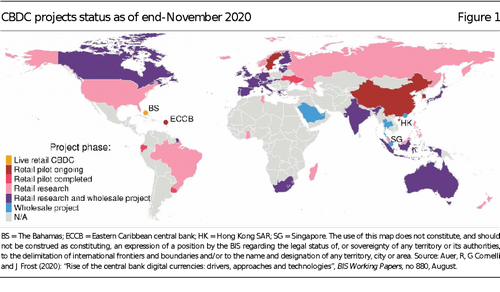 First, the stance of policy makers towards CBDCs continued to improve throughout 2020 – as highlighted by the increasingly positive tone of central bank speeches (see Figure 2). One cannot overstate just how remarkable this shift of opinion is.

As late as mid-2018, the net stance on issuance of CBDC had been deeply in negative territory (see Figure 2); a March 2018 joint report by the BIS Markets Committee and the Committee for Payments and Market Infrastructures argued that any “steps towards the possible launch of a CBDC should be subject to careful and thorough consideration.”

Underlying this, one reason for this shift of opinion is that policy makers are now more convinced that CBDCs can be issued without adverse side effects on commercial banks. In fact, in October, a key report by the BIS and seven major central banks laid out a kind of Hippocratic oath for CBDC issuance – “first, do no harm” is the premise, and CBDCs are hence seen as evolution rather than revolution.

While the debate on how exactly this can be assured is still ongoing, viable proposals have emerged (see one proposal by Ulrich Bindseil here). On the operational side, it is now evident that “Hybrid” CBDC architectures can give the private sector a leading role in the retail payment system. Thanks to these new perspectives, there is a growing possibility that CBDCs will be part of the future monetary landscape.

Second, 2021 will also see many central banks continue to step up their development efforts. Figure 2 shows that also CBDC research and design efforts have grown strongly throughout 2020. The European Central Bank (ECB) is intensifying its work on a digital euro, while – as lined out by Governor Lael Brainard – the U.S. Federal Reserve system is in the midst of a number of research projects, among others partnering with MIT’s Digital Currency Initiative.

Meanwhile, reports continue to be published by a number of central banks including the ECB, the Bank of England, the Riksbank, the Bank of Canada and the Bank of Japan. And certainly, the People’s Bank of China has continuously expanded its pilot scheme. 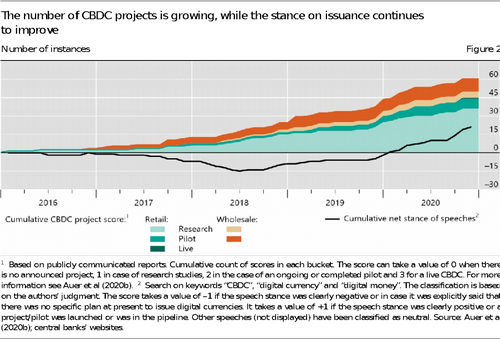 Finally, it is unlikely that the new year will see the launch of a live retail CBDC in a major advanced economy. As of now, major central banks – the guardians of stability – are proceeding with great caution. According to research by the International Monetary Fund (IMF), in the majority of jurisdictions CBDC issuance would also require a change in the central bank law.

Changing central bank law is a slow process that – if pursued – would take years and a broad political dialogue. For example, going back to Sweden, Bloomberg recently reported the government will start a review process to explore the feasibility of a CBDC, with results expected in November 2022.

However, we will likely see further research, pilots and announcements, as central banks continue to cooperate and learn from one another. So, even if 2021 turns out not to be the year when Tobin’s “medium with the convenience of deposits and the safety of currency” is announced in any major advanced economy, it could certainly bring that day very much closer.

The views expressed in this column are those of the author and do not necessarily reflect those of the Bank for International Settlements. It is based on BIS working paper 880 “The rise of the central bank digital currencies: drivers, approaches and technologies”, authored jointly with Giulio Cornelli and Jon Frost, and “The technology of retail central bank digital currency”, authored jointly with Rainer Böhme and published in the March 2020 BIS Quarterly Review.