One of the fun things about jigsaw puzzles, for those of you that haven’t tried them, is the satisfying snap of pieces fitting together to reveal part of a picture. Another is watching the whole picture emerge as more pieces join.

In July of last year, the U.S. Office of the Comptroller of the Currency (OCC) said that national banks could custody crypto assets. That was a pretty big deal, as, should national banks start to offer this service, investors could in theory ask their habitual institution to custody all their holdings, be they stocks, bonds or crypto. So much easier. A major barrier to crypto investment removed.

In September, the OCC said that they could provide services to stablecoin issuers, such as holding reserves. Banks had been doing this for some time, but in an uncertain regulatory environment. Now they had official approval to do so. Stablecoins backed one-to-one by fiat held in bank reserves are not deemed a risk in one of the most regulated industries in the U.S.

And then this week, the federal banking regulator published an interpretive letter saying that national banks and federal savings associations can use public blockchains to store and validate payments. It effectively awards blockchains the status of “payment network.”

Do you see the picture emerging? It’s not just about expanding the range of products banks can offer clients. It’s not just about offering better payment services. It’s about the convergence between traditional and crypto markets. It’s also about the role of the dollar in the economies of tomorrow.

Let’s look at why this emerging picture is worth paying attention to:

The jigsaw puzzle metaphor I introduced at the beginning reminds me of one of my favorite philosophies: “Just when you think you have life’s puzzle all figured out, someone hands you another piece.”

The crypto markets are like that. Just when you think you understand the potential impact of bitcoin and other decentralized value tokens, you find out that this story is not just about a new type of market. It’s also about traditional markets and how they evolve.

While there are many hurdles yet to overcome, and many more pieces of legislation and regulatory guidance needed, we are getting a glimpse of what the finance of tomorrow could look like. And blockchains and crypto assets play a meaningful role in the emerging picture, which depicts so much more than rising prices and portfolio allocations – it sketches a new way of transacting, something that eventually will affect all of us.

Anyone know what’s going on yet?

Everyone knows that all bubbles pop when a needle appears on the scene. It’s hard to imagine anything as messy and noisy as an insurrection being compared to something as small and sharp as a needle, so let’s mix metaphors and go with the sudden appearance of a “bump in the road.”

But that didn’t happen – the main U.S. stock markets continued to go up, and call options saw their fourth highest volume day on record. So, either traditional U.S. markets are not in a bubble, or we have not yet had that bump.

Yet, if it’s not 10-year yields edging over 1% for the first time since March … If it’s not a greater likelihood of corporate tax increases or antitrust legislation … If it’s not, heck, the realization that political polarization has pushed faith in the democratic process to a generational low, then what will that bump look like? I shudder to think.

The optimist in me likes to think that the strength of the market in the face of greater political turmoil than I’ve ever seen, demonstrates unbending trust that the U.S. democratic institutions will hold, no matter what. That’s touching. But it doesn’t feel true.

To confuse things further, crypto assets also had an extraordinary week, with BTC and ETH throwing up returns of over 34% and 60% respectively.

(Yes, I know that all three columns in the above chart are the same – it’s the way the dates worked out. This coincidence is just yet another detail that makes this week particularly weird.)

What makes this confusing from a traditional investment point of view is that bitcoin is a good hedge against “crazy,” and things were definitely crazy this week. But the stock market is telling us that everything is fine.

And it’s not that crypto assets and stocks are becoming more correlated. The 30-day correlation (not useful from an investment point of view, but a handy narrative device) between BTC and the S&P 500 has turned negative for the first time since last February. 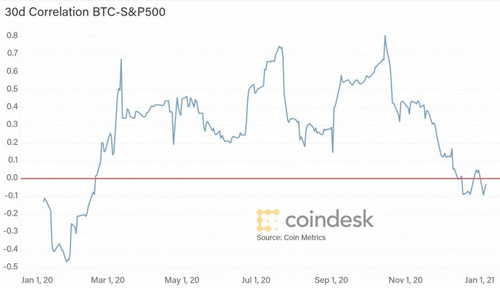 As I type, the BTC price is again flirting with $40,000, double what it was three weeks ago. Could this also be a bubble?

The difference between the movements in BTC and ETH is that they have strong fundamental drivers behind them. These include the multiple “bumps in the road” that we referred to above, and the growing awareness from institutional investors that these assets were designed to operate separately from the traditional economy, with different incentives and accounting mechanisms.

That said, a short-term correction from these levels would not be surprising (although demand may be such that it doesn’t happen). And if traditional markets crash, it is likely we will see crypto assets head down as well in the rush to liquidity. But, looking further ahead, the underlying fundamentals have never been stronger.

(Now is a good time to remind you that nothing in this newsletter is ever investment advice.)