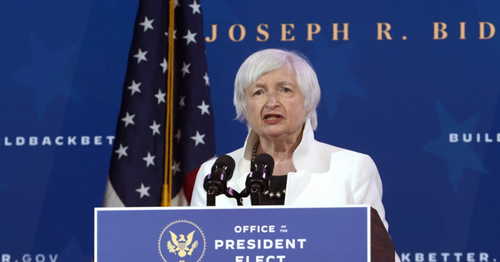 Janet Yellen thinks it is important that the U.S. considers the benefits of cryptocurrencies, alongside the potential for misuse.

The Treasury Secretary nominee said that while cryptocurrencies can be used to finance terrorism and other illicit activities, they also have the potential to “improve the efficiency of the financial system” in a written response to the Senate Finance Committee.

“I think we need to look closely at how to encourage their use for legitimate activities while curtailing their use for malign and illegal activities,” she wrote. “If confirmed, I intend to work closely with the Federal Reserve Board and the other federal banking and securities regulators on how to implement an effective regulatory framework for these and other fintech innovations.”

The written remarks, first published by Bloomberg, diverge slightly from her verbal response to a question about potential crypto use in terrorist financing, asked by Senator Maggie Hassan (D-N.H.). At the time, Yellen called crypto a concern, saying she believes many are being used “mainly for illicit financing.”

These appear to be her first public comments on the cryptocurrency ecosystem since 2018, when she said that in her view, many transactions were “illegal, illicit transactions.”

Yellen testified before the Senate Finance Committee on Tuesday ahead of a possible vote on her nomination. She has previously served as Chair of the Federal Reserve, the U.S. central bank, and has been a long-time economist.

During her confirmation hearing Tuesday, she said the U.S. would have to distribute more aid in the form of unemployment relief and support for public servants and local governments.

“Neither the President-elect, nor I, propose this relief package without an appreciation for the country’s debt burden. But right now, with interest rates at historic lows, the smartest thing we can do is act big,” she said in her opening remarks. “In the long run, I believe the benefits will far outweigh the costs, especially if we care about helping people who have been struggling for a very long time.”