DOT, LTC and LINK could all correct lower before bulls resume their uptrend

Litecoin and ChainLink, like most other cryptocurrencies, have followed Bitcoin (BTC) into the red as markets react to potentially bearish comments by US Treasury Secretary nominee Janet Yellen.

The market reaction has seen BTC price dip towards lows of $32,000 on Thursday morning. In the broader crypto market, only DOT is in the green among the top ten on CoinMarketCap.

But with further downward pressure likely before markets resume their bullish momentum, DOT and other top coins are likely to witness corrective pullbacks.

Polkadot faces a downward correction that could see it retreat further from its recently hit all-time high of $19.32.

If bulls push higher, Polkadot price could retest resistance at intraday highs around $18.14. The main target short term is to take out the supply wall near the $19.32 high, with potential rallies to $22.00 and then $24.00. 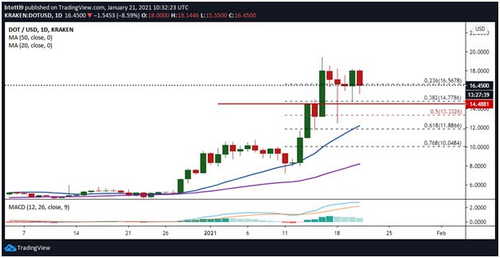 A recent break below the 20-SMA ($153) line has encouraged bears, and short term loss seems to be the most likely outcome for Litecoin.

Litecoin (LTC) has dropped to around $135 at the time of writing. If bears sustain the onslaught, the 50-SMA level ($122) could provide refuge for the bulls. Bulls will need to prevent any more losses beyond $120, confirmation of which puts bears firmly in charge and opens up a path for a retest of $100 level. 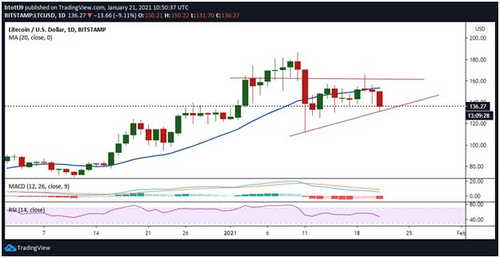 The negative divergence of the RSI below the 50-point and the MACD’s bearish outlook suggests shorts could have their day.

If LTC/USD corrects upwards and hits above the 20-SMA, a run to $160 could see bulls aim for recent highs around $186.

ChainLink is currently looking to stem the downside correction at the 38.2% Fibonacci retracement level ($19.71). This comes after increased profit booking pushed LINK/USD below the major support line at $20.00. 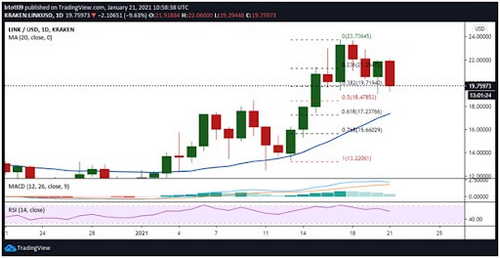 The upward-pointing curve of the 20-SMA, RSI above the midpoint, and MACD in the bullish zone suggest bulls are still in action.