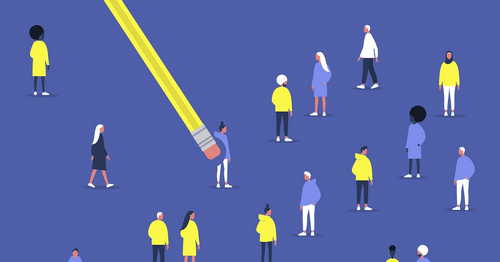 In the wake of the coordinated deplatformings of President Trump, his associates, and various conservatives from all manner of internet platforms and services, a common line of justification has been that these internet firms are merely “private companies,” and hence free to do whatever they like. Of course, no firms are truly autonomous in the modern state. From COVID to civil rights, how firms can do business, and with whom, is very much a state concern.

But the censorship apologists are right in a narrow sense, at least under our current laws: firms like Twitter are acting within their rights when they kick someone off. But the “private company” line is worth interrogating. It implies a kind of anarcho-capitalist paradise, where firms are sovereign and the sole masters of their own destinies.

CoinDesk columnist Nic Carter is partner at Castle Island Ventures, a public blockchain-focused venture fund based in Cambridge, Mass. He is also the co-founder of Coin Metrics, a blockchain analytics startup.

Of course, it’s curious in the extreme that mainstream liberals – historically, an ideology concerned about corporate overreach – are now fond of libertarian talking points. But leaving aside their oddly convenient newfound affinity for anarcho-capitalist principles, the concept of a “private company” deserves interrogation.

Clearly, companies aren’t independent of the state. They exist in a distinct legal and political context. They are obliged to follow local laws. The claim that private organizations have total discretion over whom they do business doesn’t stack up in America. My local gym, closed by mandate, is a testament to that, as is the Civil Rights Act of 1964. Now, conservatives or other individuals with disfavored political views are not a protected class. But the strong form of corporate independence is nonetheless vacuous. The state has, on many occasions, sought to determine who companies can and cannot do business with. These protected classes change frequently too, with new entrants being added to the list all the time.

But let’s continue to entertain the idea that these internet firms are acting in a manner that is entirely consistent with the letter and spirit of U.S. laws. Could it be the case they are nonetheless beholden to the state, and hence, not “private” in a meaningful sense?

Consider for a moment how you would act if you were a foreign government and all of your citizens used social media apps built in Silicon Valley. At this point, you are exposed to the caprice of a tiny handful of self-appointed bureaucrats, who can deplatform you at any time, suppress the speech of your citizens, and even algorithmically promote narratives that are hostile to your interests. And they would be fully within their rights to do so. Indeed, the heads of state of Germany, the U.K., Poland, Mexico, and Hungary have recently expressed alarm at the aggressive censorship efforts of American internet firms. Angela Merkel is no fan of Trump, but even she was perturbed by the ability of a faceless “trust and safety” committee to cut off the prime communication channel of the most powerful man in the world. Merkel is just looking out for her own interests: if Trump can be silenced by a cartel of Silicon Valley internet firms, so too can she, or any other politician.

In the face of this potential liability, world leaders could shut down the internet and wall their citizens off from the world. Alternatively, they could brew their own state-sanctioned, siloed social media. Or, if they were more resourceful, they could infiltrate these internet oligopolies and put them to work in their favor. If successful, these internet firms could be deputized into becoming agents of the state. Far fetched? Available evidence suggests that not only is this plausible, but it has in fact happened.

As internet platforms offer extreme leverage to control speech and discourse, capturing them is a prime objective for autocrats. It’s no secret that ByteDance, ostensibly a “private company,” acts as an extension of the Chinese state, happily censoring topics relating to Falun Gong, Tibet, or Tiananmen Square, or the repression of the Uighur minority. Even U.S.-domiciled companies like Zoom have been deputized by the Chinese state. Zoom is as American as it comes, trading on the NASDAQ, headquartered in San Jose, incorporated in Delaware, and founded by the Chinese-American Eric Yuan. Despite this, Zoom has been employed for further CCP aims, banning the accounts of U.S.-based individuals and organizations who discussed Tiananmen Square on the platform.

While you may be sympathetic to the entities deplatforming their political opponents, think twice when you justify the behavior with reference to ‘private firms.’ There really is no such thing.

In many cases, the capture is purely economic and quite explicit. Google is a prime example. From 2002 to 2010, after which it was blocked in China, Google happily adhered to Chinese censorship requirements. In 2016, in a bid to return to China, the firm resumed work on a censored version of its project, dubbed Dragonfly. And who can forget the N.B.A. siding with its lucrative Chinese audience over Rockets general manager Daryl Morey?

Perhaps most explosively, from 2013–15, Twitter was successfully infiltrated by Saudi Arabia, which placed operatives in the social media company and used them to de-anonymize and target accounts  critical of the Saudi regime.

Now you may respond that the Twitter scandal was an isolated incident in which only a few staff were co-opted. But we only know of the cases where covers were blown. Quite simply, if internet oligopolies are furthering state objectives, they must be considered private sector state proxies. The staff do not have to be fully compromised for this capture to occur. Because the “trust and safety” teams are private, and censorship deliberations are opaque, it’s easy to insert political discretion into platforming decisions while portraying them as the mere execution of rules.

The revolving door between top executives at internet oligopolies and the new Biden Administration further calls into question the “private companies” concept. Private sector firms do not need to be explicitly nationalized to further state interests; it’s enough to install their alumni in top regulatory positions. As a consequence, the prospects for genuine antitrust enforcement – the most promising tool to defang internet platform monopolies – look extremely dim. Amazon’s deplatforming of the tiny, but defiant social network Parler should be interpreted as a preemptive gift to the coming administration. The message sent: “don’t break us up: we will promote your ideological agenda by preemptively shutting down platforms for dissent.” No lawmaking required. Enlisting the private sector to engage in censorship by proxy is a clever constitutional end-around, for now.

The informal but coordinated deplatforming of politically disfavored firms by internet platforms is reminiscent of another case study in which the state exercised extrajudicial control over the private sector without explicit rulemaking: the Obama-era program to control bank activity called Operation Choke Point. This program, which ran from 2012 to 2015, was an extrajudicial campaign originating in the Department of Justice aimed at shutting down politically disfavored but legal industries, starting with payday lending. The DoJ imposed policy not through formal legal means, but instead by weaponizing the FDIC and insinuating to banks that they would be hit with expensive subpoenas if they didn’t sanction “high-risk” payment processor activities. These payment processors, in turn, had no choice but to deplatform the (legal) industries in question: ammunition sales, gun manufacturers, fireworks manufacturers, escort services, pornography, debt consolidation firms, coin dealers, and many others. These industries were chosen arbitrarily – a conservative administration running the same playbook might have have chosen to deplatform legal but politically disfavored businesses like abortion clinics or transgender counseling services, for instance.

Through Choke Point, payment processors, superficially “private companies,” were effectively strong-armed into refusing to platform certain firms. They had no choice, as their core bank relationships were at stake.

Although, under pressure, the FDIC withdrew its guidance to banks in 2015, Choke Point never really ended. Wary of future crackdowns, payment processors continued to refuse to do business with firms that they felt might land them in hot water with banks (and ultimately, the State). Every entrepreneur in the crypto industry has felt this keenly. And it looks very likely that the banks will once again be weaponized to interfere with the private sector. Banks are demonstrably not private companies; they are better understood as public-private partnerships, being granted the ability to create money in exchange for heavy regulation. Bank charters are strictly limited and difficult to obtain. Being highly regulated and consolidated, the financial sector is an easy target for the state to use as a tool of power projection. We can expect this form of power project to resume shortly under Biden.

Additionally, big tech is at a zenith in power, which ironically grants the state more scope for control. Collectively, the FAANMG stocks (Facebook, Amazon, Apple, Netflix, Microsoft, and Google) represent 23% of the value of the entire S&P500. The relative dominance of the largest publicly traded firms is currently at a level not seen since the ‘60s.

If it is the state’s role to constrain corporate power, then it has manifestly failed to do. Refusing to limit the power of the platform monopolies has granted them a distinct advantage and landed us in a neo-Gilded Age. With the implicit threat of antitrust hanging over these internet platforms, the new administration can expect compliance, even without explicit rule-making.

Lastly, and most importantly, the state is today simply more influential in the economy than it has been in generations. Massive spending in the wake of the COVID crisis, combined with a crunch in consumption, saw the state’s spending grow to an eye-watering 55% of gross domestic product in Q2 2020. This means that over half the value of economic output of the economy was attributable to government spending.

These levels of state intervention into the economy have not been seen since WWII. And with massive expenditure comes control. Effectively, the economy has been transformed from a somewhat free market to one in which the state largely determines economic outcomes. In this context, no “free enterprise” or “private sector” can meaningfully exist. Corporate activity today involves jostling for position around the monetary and fiscal feeding trough. Political connectedness increasingly determines trajectories in today’s economy.

So while you may be sympathetic to the entities deplatforming their political opponents, think twice when you justify the behavior with reference to “private firms.” There really is no such thing.