It is often said that Julius Caesar brought the Roman Republic to an end when he crossed the Rubicon River with the 13th Legion of the Roman Republican Army on Jan. 10, 49 BC, starting the civil war that would leave him dictator.

This post is part of CoinDesk’s 2020 Year in Review – a collection of op-eds, essays and interviews about the year in crypto and beyond. Teddy Fusaro is chief operating officer at Bitwise Asset Management, a crypto asset management firm. He previously held positions at IndexIQ, Direxion Investments and Goldman Sachs.

But Caesar accurately believed the Republic had by that time become only a name, its spirit and essence hollowed out by decades of attachment to the status quo, corruption and internal strife.

Like 49 BC, 2020 will be looked back on as the year that marks the present era from the past; the demarcation line separating the before and the after. It will be remembered as the year that everything changed.

The COVID-19 pandemic that left millions of humans sick and dead, shocked the global economy to a sudden halt, grounded all airplanes, put millions out of work and froze people in their homes for months on end will be remembered as the “Rubicon moment” that left the world indelibly transformed.

But as with Caesar’s claim that the Roman Republic had already transformed before he crossed the tiver, the truth of 2020’s change is much more nuanced, too. 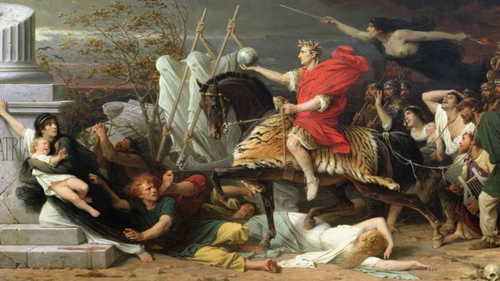 A world ripe for change

Geopolitical tensions between the United States and China have been growing for decades.

The relationship that we as individuals have to each other and the methods by which we communicate, work and interact have been undergoing changes since the advent of social media in the early 2000s.

Trust in government and traditional institutions, including the way we consume news and media and from whom, has been eroding at a quickening pace for years.

The world has been furiously accelerating towards digital, mobile and virtual modes of speech, spending, living, loving and warring for most of the last 20 years.
The COVID-19 pandemic of 2020 hastened the transitions, filling a vacuum that only needed a spark to ignite the flame that would become indefinite change, pushing the world across the Rubicon. A more resilient Western world would have already embraced the technological changes now being foisted upon society by the pandemic, and would have been more easily able to handle the public health and economic-financial fallout.

The Russian Communist revolutionary Vladimir Lenin said that “there are decades when nothing happens, and weeks when decades happen.” In many respects, 2020 has been a year of decades.

It is unsurprising then, in that context, that bitcoin and cryptocurrencies have also crossed their own chasm in 2020.

Commentators often miss the connection but as other norms and institutions evolve into their future digital, mobile and virtual shape, so, too, are norms around banking, financial services and investing. The interrelationships between decentralized systems like Bitcoin and Ethereum and these dynamics are too often misunderstood or underappreciated.

In the pantheon of business literature that describes America’s Silicon Valley, Geoffrey Moore’s “Crossing the Chasm” is perhaps the most frequently referenced work on how new technologies achieve adoption.

According to Moore, each disruptive technology must go through five stages of adoption: starting with tinkering “innovators” who first try new technologies, through the “early adopters,” to the “early majority” and “late majority” – the two biggest groups – and finally, to the “laggards.” 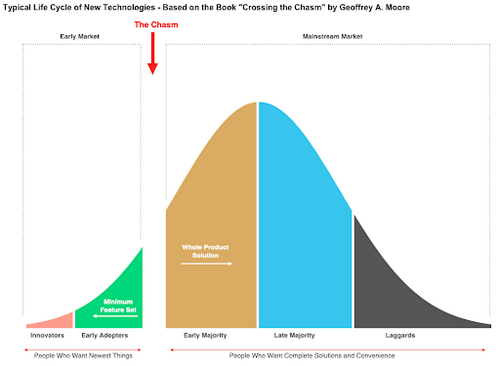 It is striking how regularly and routinely this roadmap has played out in technology after technology. The most critical stage of Moore’s framework for these journeys is what he terms “the chasm.” The chasm yawns between the “early adopters and the “early majority” because there is a step-function difference between the demands of these two cohorts. This is often where new technologies go to die.

Bitcoin and crypto may not have been ready to jump across the chasm yet, but the long year of 2020 that propelled the world across the Rubicon pushed cryptocurrency across its adoption “chasm.”

As investors and policymakers grapple with the changing dynamics of the developed-world monetary responses to the crisis alongside furious technological changes, giant financial companies like PayPal have also put crypto at the fingertips of every consumer. Crypto startup exchange, custody and trading platform Coinbase now has more user accounts than financial giants Charles Schwab, TD Ameritrade, E*Trade and Interactive Brokers combined. The Chicago Mercantile Exchange’s bitcoin futures derivatives contract has become the largest and most active bitcoin trading market in the world, previously the dominion of unregulated and un-domiciled platform operators.

Meanwhile, we have seen myriad other indications of step-function developments. JPMorgan embedded crypto as an asset class on Wall Street. Fidelity began to hire broadly, building out its crypto product suite. Square announced large technical development grants for engineers to work on bitcoin as its bitcoin offering bolstered its financial performance. Central banks announced they would build their own digital currencies. Endowments invested over $750 million with venture managers within the space.

On the regulatory front, while frequently misunderstood, significant breakthroughs have emerged despite the near-sighted interpretation of many industry participants.

The Office of the Comptroller of the Currency (OCC) concluded that federally chartered banks may provide custodial services for cryptocurrencies, finding that providing crypto custody is a modern form of traditional banking.  The Financial Crimes Enforcement Network (FinCEN), a bureau within the U.S. Department of the Treasury, proposed new rules related to “unhosted wallets” that, while philosophically contra to certain core bitcoin principles, does not reach as far as many feared it would. The Securities and Exchange Commission announced that its Strategic Hub for Innovation and Financial Technology (or FinHub) would become a standalone office and brought or concluded several high-profile cases in the space.

The drumbeat of clarifying and confidence-inducing enforcement action from the SEC and the U.S. Department of Justice has continued to push the bad actors and felons to the margin, creating a safe space for innovators and developers to play by the rules. The U.S. financial system is the envy of the world in large part due to the integrity of its markets, the sanctity of its laws and the sophistication of its regulatory agencies.  Although changes in this sphere move more slowly than innovation itself, the importance of each additional piece of clarity, independent of opinions on the rules themselves, cannot be overstated.

Despite certain loud industry voices crying foul, the regulatory activity of 2020 has further laid the foundation for the future success of crypto and related businesses in the U.S.

A reason for optimism

The global cross-currents of 2020 have been both turbulent and severe. The world has been shaken to its core. The first global pandemic in a century has mixed with a torrent of necessary technological adoption, causing all of us to adapt in different ways. These broad themes have put a spotlight on the power, resiliency, trust and immutability of decentralized public blockchains like Bitcoin and Ethereum. These public blockchains have emerged in stark contrast to our hollowing social, political and economic moorings, revealed as brittle and weak by the change brought on by the public health and economic crises.

The ideas inherent within Bitcoin and other open-source blockchain networks offer an alternative and hopeful vision for Western liberal and classical American values to mature into a fully digital future. Bitcoin is based on the enduring ideals of free speech, freedom from censorship, self sufficiency, opportunity, resiliency and the right to privacy.  It is with great optimism that we should view this acceleration of crypto’s maturation due in part to 2020’s global transformation.

2020 was the year we will look back on and believe we crossed the Rubicon. But the truth is that COVID-19 emerged into a world overdue for a watershed moment. The foundational transformations had long since manifested conditions ripe for such transitions, a system rotted through from years of bureaucracy, infighting, cronyism and resistance to change, much like the Roman Republic that Caesar marched upon in 49 BC.

While 2020 closes, as ever, the future remains vague. But what is clear is the analog world is behind us. The future is digital, mobile, distributed, trust-minimized and immutable. In 2020, the world has crossed the Rubicon and cryptocurrencies have crossed the chasm.