The unexpected five-week-long suspension of OKEx’s crypto withdrawal service has left many of its users, largely based in China, disappointed and determined to leave or reduce holdings on the exchange when withdrawals resume sometime this week.

“We will still trade on OKEx but our investment will be much more diversified and [we] will reduce our position on OKEx to about one-third of our previous one,” Alex Zuo, vice president of China-based crypto wallet Cobo, told CoinDesk via WeChat. “Even though we think OKEx is still a trusted exchange, there will be many uncertainties in the future.”

That determination has become even stronger after the Malta-based crypto exchange announced it will launch a mix of compensation and reward programs for users who have used its service during the suspension period.

“If OKEx indeed has enough assets to prepare a scenario where bulk withdrawals take place, it would be a smarter move if they told users ‘go ahead and withdraw your tokens. We will guarantee you will receive your tokens immediately,’” Daniel Wang, founder and chief executive of decentralized token exchange protocol Loopring, told CoinDesk in a phone call.

“Launching compensation and reward programs does not sound quite impressive as their marketing strategy to keep their upset users,” Wang added.

OKEx unexpectedly announced on Oct. 16 it suspended all cryptocurrency withdrawals on its platform, saying one of its key holders had “been out of touch” with the exchange because he was “cooperating with a public security bureau in investigations.”

Nonetheless, open interest for both bitcoin futures and options has remained high on OKEx. It still maintains its leading position as the leading derivative crypto exchange with the highest bitcoin futures open interest, at $1.27 billion, according to data source Skew. 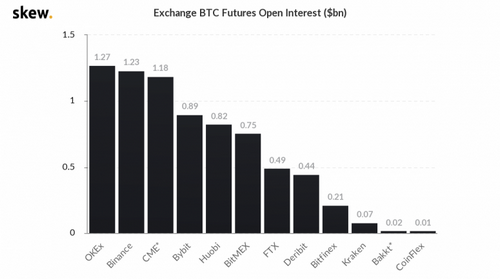 Source: Skew
Without specifying an exact date for resuming withdrawals, the exchange is preparing to reopen the service sometime this week. But this vagueness has raised questions as to why the date has not been disclosed.

Although “less likely,” some of OKEx’s larger, or “whale,” clients may be able to manipulate the exchange’s market right before or after the withdrawal opening for “arbitrage opportunities” if they learn the exact date before anyone else, Ki Young Ju, chief executive officer at crypto data source CryptoQuant, told CoinDesk.

Other scenarios include one where some whales who intend to leave OKEx may convert their bitcoins to other cryptocurrencies for a number of reasons including faster transactions, according to Ki. Or some hedge funds could send bitcoin or tether to OKEx for arbitrage opportunities.

The better scenario from the perspective of bitcoin’s price would be for a large amount of bitcoin to flow from OKEx into non-exchange wallets, bringing less supply on exchanges in general, Ki said. Usually, more bitcoin on exchanges is viewed as a bearish sign because it is seen as increasing selling pressure.

A likely possibility is that more users in China could consider sending their bitcoins to private wallets because their options are limited when it comes to exchanges.

Crypto exchanges have largely been running in a gray area ever since China’s government banned crypto trading in 2017, Wang said. Chinese crypto holders have mainly been relying on the “Big Three” exchanges – Binance, Huobi and OKEx – that started in China initially with high trading volumes and relatively good reputations.

Huobi and OKEx have both boasted of their close relationships with the Chinese government. However, running their exchange business in a gray area means that close ties with the government does not guarantee the safety of the exchanges’ users’ funds in China, as evidenced by OKEx’s situation.

“We believe that after this incident, the trading volumes on OKEx will decline significantly and institutions will also likely withdraw from it,” Cobo’s Zuo said. “Huobi will have the same potential risks. Binance as well.”

Zuo told CoinDesk his company has started considering opening accounts on other exchanges including FTX, Coinbase and Bitstamp, but it will take a long time to shift those transaction volumes from the Chinese Big Three exchanges.

Flex Yang, founder and chief executive officer of Hong Kong-based crypto lender Babel Finance, said that what remains attractive on the OKEx platform is a variety of derivative products, which may keep some of the more seasoned traders from leaving the leading derivative crypto exchange.

“In fact, we have seen that some traders have been trading on OKEx despite the withdrawal suspension,” Yang said. “It is expected that users that have been trading some contracts offered on OKEx only will return to OKEx soon.”