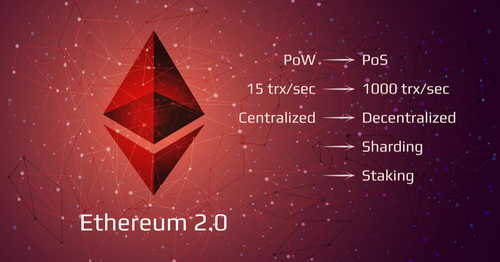 Ethereum 2.0 is set to launch on 1 December after the deposit contract reached its target a few hours ago

The confirmation came after 16,384 validators transferred 524,288 ETH coins to the deposit contract since it was activated on 4 November. There were concerns early on regarding low ETH staking. However, the validators picked up speed over the past 24 hours, with over 200,000 ETH sent to the contract within the timeframe.

The genesis event is now taking place seven days after the required deposit threshold was triggered. The genesis participants won’t have access to their ETH coins until the update reaches phase 1.5. At this phase, the Ethereum mainnet will merge with ETH 2.0’s beacon chain and sharded environment.

The genesis participants would be waiting for third-parties to roll out withdrawal-enabled staking services as that would allow them to have access to their coins again.

Ethereum’s co-creator Vitalik Buterin celebrated the surge in deposits and urged more people to deposit before the beacon chain’s activation. Those that deposited before the activation will get to participate in the genesis event.

He tweeted that “Deposit contract is at 460k ETH (~87.7% of target) with 12 hours left until the earliest possible launch activation time! (Launch will happen at seven days after activation; need to reach 524288 ETH to activate)”.

There were doubts within the crypto community regarding Ethereum’s ability to reach the deposit threshold. Some crypto enthusiasts speculated that the deposit contract threshold might not be met until next year as only 50,849 ETH were deposited in the first week of the contract launch.

The imminent launch of the genesis beacon has seen Ether perform excellently over the past few days. ETH is up by more than 350% so far this year after it started the year trading at $135 per coin. It is currently trading above the $600 mark, and it could surge higher over the coming weeks.