What’s behind this current run-up in the price of bitcoin? That’s a question for which many people want a definitive answer. So far, one unifying theory is tough to come by.

What we do know is that since mid-October the price of bitcoin shot up from the $11,000 range to the cusp of $19,000. And while prices are a few hundred dollars shy of its all-time high, bitcoin’s market cap recently set a record by breaking above $345 billion; since the mega-rally in 2017, more bitcoin has been mined and put into circulation.

For a large swath of market observers, the cause of the rally is clear: more buyers with deeper pockets. If so, that augurs well for continued gains. But there’s also a plausible theory that unusual circumstances have temporarily constrained supply, calling into question the rally’s staying power.

The case for demand: New money

It seems not a day goes by without some story of a major financial institution warming up to bitcoin, if not outright embracing it. A CIO at BlackRock saying on CNBC that it “could take the place of gold to a large extent.” An analyst at Citi saying bitcoin could reach $318,000 by the end of 2021. A report from JPMorgan claiming institutions are buying at three times the amount they were in the previous quarter.

The world is in the midst of a pandemic that is wreaking economic turmoil on every continent, even Antarctica. Central banks are printing fiat currency as fast as they can (funnily enough, Hewlett Packard’s stock is up 3% year to date). Governments are also in on the act, throwing trillions of dollars, euros and anything else they can borrow in an effort to stave off an economic calamity that would lead to social unrest and violence in the streets – or more of it.

Since its birth in the depths of the global financial crisis more than a decade ago, such potentially inflationary measures were exactly the sort of things bitcoin advocates warned about, and perhaps secretly hoped for, when they began stocking up on digital assets. 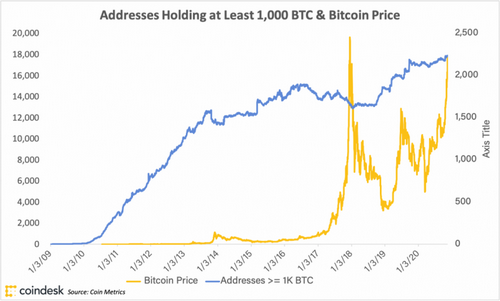 Bitcoin addresses holding at least 1,000 BTC vs. bitcoin price
Then there’s the data. CoinDesk’s Galen Moore spells out in a recent piece four ways this current rally is different from the one of 2017. More “whale” accounts are holding 1,000 or more bitcoin than ever before, and unlike three years ago they have been growing in number with higher prices. Bitcoin and its closest rival, ether, are making recent highs together, whereas in 2017 ether’s record prices were in the rearview mirror for months after bitcoin was going higher. Regulated markets are part of the mix this time around, with the CME daily futures trading volume hitting north of $1 billion several days the past few months. And since the start of 2020 some 200,000 bitcoin have been sold by investors in East Asia to satiate the growing appetites of their counterparts in North America.

These are all profoundly bullish signals. However, there remains a gnawing “why” question: Why just now?

After all, preliminary data on three vaccines for COVID-19 have shown an efficacy rate of 90% or higher. The very physical threat that loomed over workplaces and every aspect of everyone’s life may soon be gone. And even on the political front, uncertainty in the United States over who will run the federal government in a couple of months has also begun to dissipate.

The case for supply: Bottled-up bitcoin

Part of what makes the narratives to the current run-up seem so attractive is they focus on the demand side of the explanation. Yet, as we all know, supply is the other side of the equation. Is there enough bitcoin to slake the thirst of all those new buyers who have entered the market, spurred by economic worries and egged on by analysts?

Months ago, supply was the big topic among those who talk about crypto. Bitcoin was undergoing a halving, whereby rewards given for successfully mining a block were cut in half. That would automatically lead to a surge in prices, went the theory, because there were going to be 900 fewer new bitcoin added to supply every day but there were new buyers added every day. This was back in early May; in the subsequent couple of months bitcoin’s price stayed around the $9,000 range. As halvings are known events programmed into bitcoin’s code since the very beginning, the market apparently wasn’t all too surprised when it actually happened.

Getting back to what else we know, one thing to add to that list is that in China, site of the lion’s share of bitcoin’s hash power, a government crackdown is taking its toll on some of the crypto exchanges that cater to the country’s miners and traders. The crackdown isn’t necessarily about halting crypto but rather trying to stamp out money laundering. It just so happens crypto exchanges are possibly, maybe, suspected in the mix. Thus executives at exchanges have been getting the third degree.

At OKEx, a key executive – literally, the guy who had the keys for OKEx’s addresses – went MIA and only recently resurfaced after spending some time talking to authorities in China. In the meantime, the allegedly Malta-based exchange was forced to halt withdrawals because, obviously, only one person had such keys for one of the world’s largest trading venues and he happened to be in China. It is hoped OKEx has figured out a contingency plan in case someone gets hit by a bus.

Outflows of bitcoin from OKEx vs. bitcoin price
Oh, and the date this all started? Oct. 16. That happens to be a couple of days before the price broke out of the trading range between $10,000 and $12,000, where it had bounced around since July.

The case against supply: Business as usual

Then again, just because one can’t withdraw bitcoin from OKEx, that doesn’t mean one can’t trade on it. In fact, open interest on its futures contracts are at $1.22 billion, according to Skew. That’s the biggest open interest figure for any exchange. The CME, for instance, is $200 million smaller. 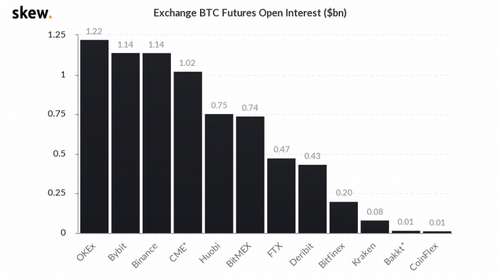 Bitcoin Futures Open Interest by Exchange
While bitcoin can neither flow into or out of OKEx, its price is in line with those of its rivals.

“BTC’s price on OKEx is not that different from other exchanges,” Ki Young Ju, chief executive officer of data provider CryptoQuant, told CoinDesk’s Muyao Shen. “…[P]eople can trade their BTC on OKEx despite the withdrawal suspension.”

And miners are finding other venues to unload their newly minted bitcoin; Huobi, Binance and other exchanges seem to be picking up the slack, according to data from Chainalysis. Unfortunately, it hasn’t been Robinhood-easy for some miners to then convert their crypto into fiat (in this case, Chinese yuan) because of the money laundering crackdown.

The two explanations for bitcoin’s bull run discussed above – new demand and bottled-up supply – are not mutually exclusive. Soon, at least one of them will be put to the test: OKEx is expected to allow withdrawals by Friday of this week.

“With all of the institutional flow around crypto, I don’t think the status of any single exchange is enough to affect prices beyond typical daily volatility,” George Clayton, managing partner of investment firm Cryptanalysis Capital, told CoinDesk’s Daniel Cawrey.

In the meantime, keep an eye out for when OKEx allows withdrawals again.

Bitcoin is trading at fresh 35-month highs above $19,000, having defended the psychological support of $18,000 during the Asian trading hours. The crypto market leader is now just 4% short of testing the record high of $19,783.

Hence, most alternative cryptocurrencies, which are still down significantly from their respective lifetime highs, are beginning to look relatively cheap. For instance, ether, the second-largest cryptocurrency by market value, is down at least 57% from the peak price of $1,431 reached in January 2018, despite having gained over 50% this month alone.

The leading cryptocurrency by market value has rallied by $9,000 in the past seven weeks and looks set to challenge the all-time high of $19,783 reached in December 2017.

Notably, the cryptocurrency is closing on record highs 6.5 months following its third mining reward halving, which took place on May 11 this year. Reward halving refers to a programmed 50% reduction in block rewards executed every four years to keep inflation under check.

The latest move toward record highs looks similar to the one seen four years ago.

Bitcoin underwent its second halving on July 9, 2016, when prices were trading near $650. By the end of February 2017, that is, seven months after halving, the cryptocurrency had set a new peak price above the November 2013 high of $1,163.

The rally did not stop there, and the cryptocurrency went on to hit a record price of $19,783, as noted earlier. If history is a guide, bitcoin could see a significant rally in 2021.

Most analysts expect bitcoin to explore the uncharted territory above $20,000 over the next 12 months, courtesy of increasing institutional participation and bitcoin’s growing appeal as an inflation hedge.

According to Su Zhu, CEO of Three Arrows Capital, $36,000 is the level to watch out for once the cryptocurrency establishes a foothold above $20,000.

“This [$36,000] is the strike with the largest bitcoin open interest on Deribit exchange, the dominant market leader in bitcoin and ether-settled options trading,” Zhu tweeted.

The latest on the economy and traditional finance