My firm represents tenants in lawsuits against landlords. We do a lot of wrongful eviction and fraudulent eviction cases where a landlord says to a tenant, “You have to move because my mom’s moving in,” and then mom doesn’t move in. We sue for that.

We do a lot of financial elder abuse cases where a landlord is evicting an elderly tenant who may not be aware of their rights, and we defend eviction actions.

The pandemic stopped all our cases brought by tenants against landlords that were going to trial. The pandemic also stopped eviction cases from coming in because, when it first hit, there was a rent-payment moratorium issued by the city of Los Angeles and Los Angeles County. The Judicial Council of California also issued an eviction moratorium. We all thought this freeze on eviction cases was going to last for quite a short period of time, but it lasted several months. And then the Judicial Council, which is in charge of all of the courts, essentially said to the legislature, “Stop making us do your dirty work. We’re going to lift this eviction moratorium because you’re asking the Judicial Council to legislate.” So in August, the state of California put together a statewide Covid-19 act that amended several parts of the eviction statutes.

There’s been a spike in eviction actions where landlords are making things up so they can try to evict a tenant based on breach of lease. 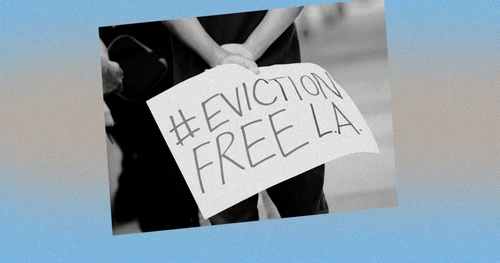 Now we have a statewide, semi-eviction moratorium, which means landlords can evict people for doing certain things but not others, like not paying rent. Some landlords are now getting creative. There’s been a spike in eviction actions where landlords are making things up so they can try to evict a tenant based on breach of lease because that’s the only type of eviction available to them. For instance, we are defending an eviction case where the landlord said, among other things, “You have four dogs.” Our client doesn’t have four dogs.

When the moratorium on nonpayment evictions is lifted in California, I expect more of the same. Under state law, if a landlord wants to evict for nonpayment of rent, he now has to give the tenant 15 days to pay. The tenant would also have to pay 25% of the rent due for September through January, a month before the moratorium is currently set to lift. We really do not know what will happen with the law after January. But currently, if the tenant returns the correct paperwork and makes these payments, then the landlord can never evict the tenant for withholding rent during the Covid-19 pandemic. All the landlord will be able to do is sue the tenant for the back rent in small claims court — not eviction court. The tenant might end up with a judgment against him for the withheld rent, but he won’t get evicted because of it.

I’ve got a couple of eviction cases that were filed in December last year that would have been set for trial long ago, but then this shutdown happened and they’re still pending. We’re just waiting and waiting and waiting. One of the problems with a pandemic is that it’s hard to get jurors. About a month ago, I heard that they had tried 20 criminal cases since the pandemic started. That is not much in Los Angeles County. I haven’t had a case go to trial since January. I expect I’ll be showing up for a trial call in a couple cases in December. And then they’ll say, “Well, we can’t find a courtroom for you,” because I try eviction cases to juries, and I find that that is the best way to protect my clients.

There are a lot of resources being made available to tenants. There are grants to nonprofits that are specifically to represent tenants in court, and in Los Angeles County, there is a website called stayhousedla.org that is sort of a clearinghouse for tenants who are looking for representation and answers. It’s very important that tenants who are sued for eviction get lawyers. Many tenants wrongly believe if they receive an eviction lawsuit, there will be a date on it and that’s when they just have to show up and explain things to the judge, but that’s not how it works. We don’t have an informal housing court in California. An unlawful detainer action is a real lawsuit with procedural rules, so it’s just not something the people who get sued can do on their own.