Republicans got all the concessions they asked for with the insurrection commission bill, yet McConnell wants to block it anyway. Shortly after the January 6 insurrection at the US Capitol, members of congress from both parties condemned those involved.

Former president Trump was impeached for a second time over his role in inciting the violent mob which overwhelmed Capitol police and stormed the federal seat of government.

At the time, then Senate Majority Leader Mitch McConnell placed the blame for the violence that left six dead and dozens wounded squarely on Trump. But as time has gone on and political calculations have been made, McConnell has changed his tune.

For months now, lawmakers have been discussing a congressional investigation into the insurrection. Democrats want a bipartisan commission, similar to the 9/11 commission, to look into the root causes and key security breakdowns that led to the storming of the Capitol.

Republicans, meanwhile, have continuously sought to water down any possible investigations, at first suggesting the commission look into all political violence, and then suggesting other congressional committees conduct separate examinations. 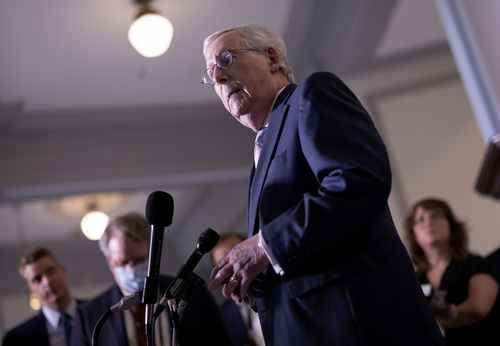 Democrats persisted in their demands and worked with congressional Republicans on a compromise wherein both parties have equal control, and veto power, over staffing and subpoenas.

But there’s a major problem with a bipartisan approach to investigating this incident. The insurrection was a wholly Republican operation, meant to restore executive power to Trump — and, by extension, the Republican party — after losing the 2020 presidential election.

Any investigation into the matter will undoubtedly embarrass Republicans heading into the 2022 midterms, where conservatives are hoping to take back both houses of congress. Giving Republicans veto power over key portions of a serious congressional investigation will only end up hamstringing the commission’s fact-finding mission.

Even that is not enough for McConnell. He understands that every second spent examining or discussing the insurrection, which was deeply unpopular across wide swaths of the American electorate, will cost Republicans votes in key states and districts.

McConnell correctly calculates that the American public understands that Republicans were responsible for the insurrection, and so now he’s going around to his Senate colleagues asking them to vote against the commission as a “personal favor.”

It’s as close to an admission of guilt as we’ll ever see over this shameful piece of history.