Don’t judge me, but I collect VHS. I swear I’m not a hipster. I’m a first-year millennial, and VHS tapes truly are the sacred texts of my people. The holy, acrid smell of seemingly ageless plastic as the cassette slides from its box.

The ritual before inserting it into the VCR: Hinge the flap, spool the tape taut with your fingertips, and check the rewind status. Perhaps denominational differences in household pre-watch observances: popcorn and a Coke, read the back of the box, pillow fort.

The nostalgic benefits of VHS extend to content as well. Original trailers, title cards, and production company logos are preserved in static detail for the life of the surprisingly sturdy cassette. But the real reason for my collection is that VHS tapes are time capsules of the truly weird. The du jour, the one-off, and the filmmaker’s aborted shame lie dormant in dusty boxes at garage sales and flea markets. Best of all is my most coveted precious, trash.

Trash doesn’t make the DVD migration unless it’s at the filmmaker’s expense. Trash is somewhat akin to cult but with a harder edge, a steeper learning curve, and not a single fuck to give about whether you like it. With trash, like cult, if you know, you know, and if you don’t, you should—at least enough to be able to recognize it in the wild. Without trailers and viral marketing, trash can live a lonesome existence until you scoop it out of the bin and take it somewhere warm.

I found the highest peak of my trash mountain in a Goodwill store in Bowling Green, Ohio, which coincidentally is also a trash mountain. And a swamp, somehow. I went there to start school and bonded with a friend over trash. We made a game of going in search of VHS at the library sale or the junk store, where they sold for a quarter. A couple times a week for a few years, we found some serious booty. There was the Willie Aames Bible Man series; Van-pires, junkyard transformers who teach us about the moral value of Big Oil; and Dancing Grannies, objectively the greatest aerobics video ever made. 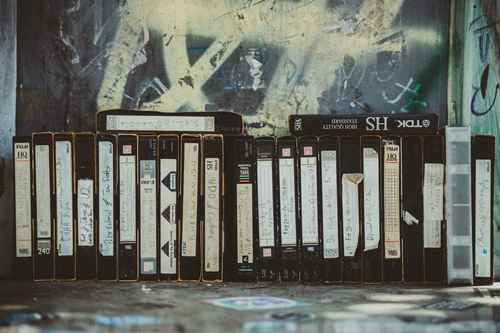 The mountain was getting taller and harder to top, but we weren’t really in it for the glory. All trash is good trash. We had no reason to think we’d ever bite off more than we could chew. We’d survived Battlefield Earth and the Mark of the Beast televangelist marathon. We were untouchable. But a box called out one day, and—I say this without a shred of sarcasm—we were both forever changed by the weirdest, most challenging, slaphappy, irreverent, most rewarding damn thing I’ve ever seen: Mark Pirro’s 1988 psychotic shitstorm of a movie, Curse of the Queerwolf. I will do you the courtesy of mentioning that the following synopsis is, like the movie itself, what folks would call “problematic.” And this is a big part of the point. So, just grit your teeth and get through it. Here, take my hand. We’ll go together.

Larry meets someone he believes to be a woman, but is actually a transvestite, who turns him into a “queerwolf” by biting him on the buttocks. He transforms into a transvestite at night when there is a full moon. People hunting the werewolf discover the transvestite at Larry’s apartment, and they also warn him about a curse. A gypsy offers to help him, but Larry refuses until the first full moon that he experiences. The only way for him to combat the transformation is to look at a medallion with a picture of John Wayne.

Shudder. Now that we all feel unclean, let’s get past this. There’s nothing incorrect here, and it qualifies as exactly the type of synopsis that trash connoisseurs would key off. But for me to sell you on the value of trash, we’ll have to dig deep.

Trash often opens with what I call the friendship test: If you can get through this, we can be friends. Like a trust fall over a canyon of crocodiles. Are you in or out? Queerwolf threw me and my friend the hardest friendship test we’ve ever taken.

Larry Smalbut is a normal man. We expect to be told this in the traditional toxic way because Queerwolf opens in a strip bar. Larry and his best bud, Dick Cheese, sit at the base of the stage while women swing around poles. Dick leans over to Larry and whisper-yells, “Now that’s some poon.” It’s so perfect as an opener because not only does it sum up Dick, but it also affords Larry the opportunity to react disgustedly. But this isn’t the test.

Larry and Dick meet two women and take them home for a party, where we are introduced to some of the movie’s running gags, some of which are tests unto themselves: Larry keeps getting and accidentally killing multiple puppies; Dick keeps killing his patients.

Dick and his date enjoy the hell out of their evening, with sex that escalates in creativity and elaboration. We see them make trips to the refrigerator for sexy foods, and as their trips continue, they begin to bring more unusual items: the toaster, a gas mask, some copper tubing. Their exuberant play is the soundtrack to Larry’s much more chaste couch make-out session. From the back of the VHS box, we knew that Larry is about to discover that his date is a “transvestite,” and my friend’s body language on the other end of the couch reflected what I was starting to feel, which was “I don’t know if I can do this.”

Predictably, Larry and Dick freak out when they find out Larry’s date is a transvestite. Several minutes of gay and trans panic ensue, and I was working myself up to suggest we turn off the film. I could sense the tension growing in my friend as well. I am eternally grateful that we lasted the next 60 seconds, because Larry and Dick hear a knock at the door, and the queerwolf hunters rush in with literal torches and pitchforks. The ridiculousness of it: They wear all-black ceremonial robes and carry a silver dildo, which we learn is the only way to kill a queerwolf. Larry and Dick, who thought the weirdest part of their night had passed, are confronted with a choice between their panic and a mob of angry villagers.