Miner manufacturer Canaan (CAN) ended November with a record monthly gain of nearly 140%, with its American depositary receipts trading at $4.99 by Monday close.

Riot’s gains come amid its accumulation of thousands of the industry’s leading mining machines, according to Thomas Heller, chief operating officer at mining software company HASHR8.

“Riot expects to have a total of 22,640 miners deployed by June 2021, and the majority of them are S19 Pro miners,” Heller said. “Along with the M30S++, the S19 Pro is the most powerful and efficient miner on the market, and commands the highest market price.”

Riot also nearly tripled the dollar value of bitcoin holdings, per the company’s Q3 earnings, reaching $9 million, up from $3.1 million during the same period in 2019. Marathon also reported a triple-digit percentage increase in its bitcoin holdings after a record-setting quarter of mining revenue in Q3. 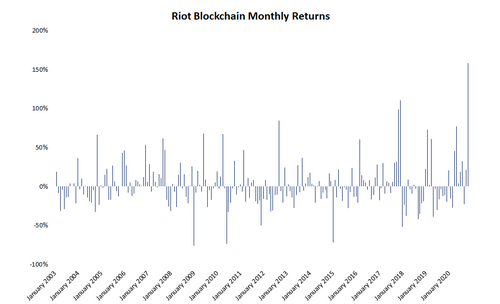 Canaan’s gains come as a relief to shareholders who suffered a 85% drawdown at the end of Q3 from its initial list price in November 2019. To date in Q4, Canaan shares are still down 18 percent.

“Mining stocks are a very attractive way for investors to get upside exposure to [the] bitcoin price while being limited on the downside due to the infrastructure nature of the business,” said Ethan Vera, co-founder of mining company Luxor Technologies, in a direct message with CoinDesk.

“The best mining companies can deliver profits in bear markets and have outsized returns in bull runs,” Vera said.