Such is the case with the 18,000 interpreters in Afghanistan who aided our troops over the course of a 20-year war. The Taliban, taking back more and more territory, have messaged individual interpreters: “We know who you are, Traitor, and we will kill you.”

Despite assurances from the Biden administration, the evacuation of Afghan interpreters is tied up in bureaucratic squabbling.

It is clear: If your military troops deployed in Country X have been aided by members of Country X’s population — such as interpreters, drivers, fixers, security guards, staff at your embassy, etc.; and if, in aiding your troops these interpreters, etc., have also saved your troops’ lives; and if, by aiding and saving your troops these interpreters, etc., have been marked as “traitors” by the forces soon to take over Country X as you pull out, then you have a moral duty to aid them in return, as they seek refuge from certain death for themselves and their families.

What is not clear, however: If the Biden administration sees evacuating the Afghan interpreters as top priority — as a moral imperative.

While the Commander-in-Chief, President Joe Biden, recently gave assurances on this point — “Those who helped us are not going to be left behind” (June 24) and “There is a home for you in the United States, if you so choose, and we will stand with you, as you stood with us” (July 7) — his administration has to date not (as the parlance goes) “executed.”

And the hour is so, so late: Whereas earlier President Biden designated the symbolically resonant date of September 11 as the date when all U.S. troops would be gone from Afghanistan, he has now reset it earlier, to August 31 — which is only one-and-a-half months away. Meanwhile, the Taliban reports even they are “surprised” how fast they are retaking Afghan territory: They now control 100 of the country’s 407 districts, mainly in rural areas and not — or not yet — the cities. Meanwhile, third countries and Guam have issued a public welcome to any Afghan interpreters evacuated to them (see: Guam governor’s statement). Meanwhile, the supreme commander of all American troops in Afghanistan, theoretically the in-country coordinator of any evacuation, has departed Afghanistan as of this week. 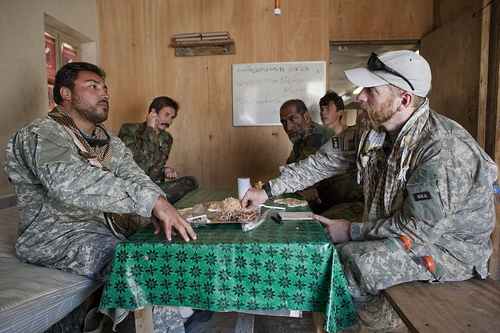 No wonder the conscientious American, who cares about America’s moral duty, has for weeks now been jumping up and down, screaming: What in Heaven’s name is the hold-up?

Hold-up is due reportedly to “internal debate” within the Biden administration, per an NBC News scoop just days ago (July 9). Officials within the Department of Homeland Security and State Department argue that taking Afghan interpreters to Guam, an American territory, would present “legal issues”: that is, the Afghans would have “more legal rights” than if taken to a non-American territory, i.e., they could appeal the denial of their application for a Special Immigrant Visa (SIV), a category established specially for Afghan and Iraqi interpreters. But: If the application is improperly denied, what is the problem with appeal? Hold-up also stems from concern on national security grounds, notably in Homeland Security: that is, what if one of the Afghan interpreters is a terrorist? But: All Afghan interpreters were subjected to a thorough vetting BEFORE they were allowed to serve with our troops. Again, what is the problem?

The problem, then, appears to be bureaucratic, with so much internal wrangling going on that the moral imperative cannot impinge.

Absurdly, Secretary of State Antony Blinken continues to ask for patience in the application process. But the typical SIV application takes on average 500 to 800 days to process, while, again, the door of American presence in Afghanistan closes in just 1.5 months. Blinken also quibbles with the press using the word “evacuation,” straining again to redirect attention to the visa application process, while also, it should be noted, indirectly indicating there is no military planning underway for an evacuation (unless of course there is such military planning underway in secret).

To break the bureaucratic logjam, a bipartisan group in the U.S. House — the Honoring Our Promises Working Group — has set up and sent two letters (here and here) to President Biden, urging swifter processing of applications and the moral duty to aid. Pointedly, the second letter notes the administration’s silence on evacuation: “We appreciate the complexity of ending the War in Afghanistan, but we are increasingly concerned that you have not yet directed the Department of Defense be mobilized as part of a concrete and workable whole of government plan to protect our Afghan partners.” This working group, led by Reps. Jason Crow and Seth Moulton, is made up mostly of military veterans and, it’s worth repeating, is bipartisan: 10 Democrats and 6 Republicans. Moreover, a like bipartisan group has set up in the Senate, led by Sens. Joni Ernst and Jeanne Shaheen. What issue, apart from pandemic relief, has enjoyed bipartisan support in these viciously polarized times?

Also banging the drum to save the Afghan interpreters, along with many other organizations: #NoOneLeftBehind, an advocacy group led by Afghan and Iraqi interpreters now living and working in the U.S. According to its records, 300 interpreters and their family members have been killed since 2014 because of their association with the U.S. The organization’s cofounder, Janis Shinwari, saved five (5) American soldiers during his eight years serving as interpreter in his native Afghanistan (he became a U.S. citizen in 2020). (The other cofounder, Matt Zeller, one of those Americans Shinwari saved, worked years to get Shinwari through the red tape to the U.S.) In this rescue mission, apart from the interpreters themselves, working hardest are their American comrades-in-arms. On its website, #NOLB states explicitly: Saving the interpreters is a “moral” obligation.

The moral note is sounded elsewhere. Retired Army general David Petraeus, former supreme commander of U.S. troops in Afghanistan and Iraq, states: “We have a moral obligation to those who served shoulder to shoulder with our men and women on the ground and who put their security and the security of their family members at risk.” The Chairman of the Joint Chiefs of Staff, General Mark Milley, recently stated in Congressional testimony: “I consider it a moral imperative to take care of those that have served along our side. We are prepared to execute whatever we are directed.” In other words: Back to you, Mr. Commander-in-Chief.

Historically, such evacuations have been executed by America before — notably, after the fall of South Vietnam, when we evacuated 130,000 allies to Guam, thence to the U.S. In 1996, 6,600 Iraqi Kurds were evacuated, again to Guam — this evacuation organized “in a matter of days,” as notes the Veterans for American Ideals program at Human Rights.

In other words, evacuation of the 18,000 Afghan interpreters, and their 53,000 family members, is do-able — if the will exists and the order goes out.

And let us not forget: America abandoned the Kurds on the battlefield, in 2019, after a “deal” between our former President, Donald Trump, and Turkey’s president, who had designs to take ownership of that very battlefield — a dereliction showing America to be a treacherous ally.

Dear President Biden: With America’s good name besmirched by your amoral predecessor, America needs to get right with the world. “Getting right” means doing the right and moral thing; as a moral man, you already know that. As President, your responsibilities come entailed with myriad contingencies and doing right becomes more complicated. But the matter of the Afghan interpreters is not complicated, not really: They came to our aid, now we must come to theirs. After much tribulation in America, saving the Afghans would in part be saving ourselves.

We must do this, Mr. President, and we can.