Tezos traded at lows of $3.1 on Monday but could hit $4.5 or higher if sentiment remains positive

As Bitcoin and Ethereum look to recapture the momentum that took them to $48.2k and $1.8k respectively, a similar outlook for Tezos price points towards a run to a new all-time high (ATH).

At the time of writing, Tezos (XTZ) is trading at $3.79, over 10% up in 24 hours and more than 29% higher over the past week. The buy-side pressure being witnessed currently will need to increase significantly for bulls to crack the immediate resistance and climb to $4.0.

Above this price level, the lack of any hurdles would put Tezos spot on for a run to a new ATH above $4.5.

XTZ had stalled under $3.5 since a previous breakout from lows of $3.0 on 4 February. However, the upside above the stubborn price level saw bulls target the upper boundary of an old ascending parallel channel. The current price levels of $3.8 put Tezos price above the apex line of the channel, with a clear path to explore prices near the ATH of $4.5.

The daily chart shows the RSI and the MACD are in bullish territory, which lends credence to the view that a fresh spike could see bulls test a new ATH. 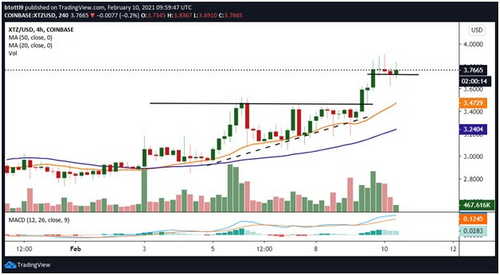 On the 4-hour chart, we see that Tezos recently broke above an ascending triangle pattern. The upside helped bulls to trade higher, with the series of higher lows and lower highs forming a rising  support trendline.

Although the breakout appeared to stall earlier today, bulls have kept it intact by battling resistance to cross $3.6. With prices around $3.8 and in an uptrend, the next target is $4.0. If the bullish momentum holds short term, XTZ/USD could trade around $4.5 within the next 24 hours.

The RSI and the MACD are both bullish, suggesting the upside path is the most likely one short term.

The contrary view will come into play if prices fall below $3.5. In such a scenario, the 20-day simple moving average, currently at $3.47 would provide the initial support zone. The 50-SMA ($3.24) offers another support level, below which bears can target movement towards $2.4 and $2.0.