The story of the Greenville Food Blockade has been heavy on my mind as I think about the American voting landscape from November until January 5, as the national gaze turns to Georgia, where I live. The state has become ground zero for voter suppression and, concurrently, grassroots organization.

It’s no coincidence that one of the organizers at the heart of the fight, Stacey Abrams, is from the very same Mississippi that killed, starved, and abused Black people who wanted their voices heard politically. And while Abrams and the many grassroots organizations in Georgia had a tremendous victory of registering some 800,000 disenfranchised voters and flipping the state blue, she also knows all too well just how nasty the fight to eliminate the Black vote can be.

After all, Abrams herself was the victim of one of the most unjust gubernatorial races in recent memory, losing to Brian Kemp, who at the time was the secretary of state in charge of voting. He refused to recuse himself, and he led the charge to purge more than 1 million voter registrations from 2012 to 2018. Abrams ended up losing Georgia by 100,000 votes.

Kemp’s voter suppression tactics are the dark cloud that hangs over the state as we prepare for the runoff elections to determine which party controls the Senate for the next two years. Ossof and Warnock have uphill battles against longtime staple Perdue and Trump loyalist Loeffler. That battle is even more treacherous when considering the possibility of a repeat of 2018.

We’ve already seen Donald Trump take aim at the legitimacy of voting in his election overall, but especially focusing on strongholds that determined major wins for Biden: Detroit, Milwaukee, Philadelphia, and Atlanta. Ostensibly this is about Democratic strongholds in big cities, but the dog whistle here is that these cities are overwhelmingly Black. When Trump and his goons talk about places like Philadelphia being notoriously corrupt, they’re talking about cities that allow Black people to vote in droves. The same is especially true for Atlanta. 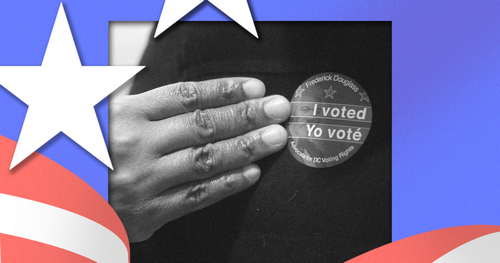 While Brian Kemp is, to his credit, playing things straight in Georgia regarding the presidential election by refusing to entertain Trump’s complaints, it’s necessary to be vigilant and maintain a healthy skepticism about his forthrightness when it comes to a continued blue wave in his state. We’re all bracing for whatever diabolical trick of voter suppression he’s going to attempt.

Therein lies the reality of what it’s like to be a Black voter in America, especially in the South, where the bloodlines of starvation and missing bodies of those who simply want to vote run through. Every Black vote in America is an act of resistance and has been the case since the U.S. government passed an amendment that pretended to give us the right. It’s impossible to know the depths to which Brian Kemp, Donald Trump, and any foot soldiers who follow them will stoop to protect their candidates from the reckoning of a powerful Black electorate.

No, I don’t think Georgia officials will try to starve residents to death to secure a majority Senate like the WCC did in Mississippi. But we’ve already seen a criminally corrupt misuse of the U.S. Postal Service to deny sick people the medicine they need, all in the service of suppressing votes and forcing voters to cast in-person ballots in the middle of a pandemic. There is no floor. And utilizing a pandemic during a critical election falls well within the moral compass of groups who wish to silence Black political voices.

I don’t know what obstacles are awaiting Black voters in Georgia between now and January. But I know we’ve seen the worst before, and we will not go quietly into an abyss of political silence without a fight extending to January 5 and beyond.