An hour’s drive from the city of Saint John, and only a hop away from the American border, the colourful waterfront town of St. Andrews by-the-Sea, New Brunswick, has long been a summer playground for wealthy Americans. 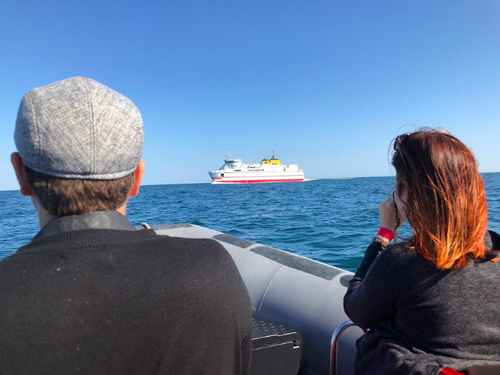 Whale watching aboard a Zodiac on the Passamaquoddy Bay, with the Grand Manan ferry in the distance/photo credit: Helen Earley

Let’s start with the spooky stuff. The grand Algonquin Resort has changed hands many times over the years. Frequent travellers to the Maritimes will recognise the mock-Tudor panelling, and distinctive red roof and turrets, much like its hotel-cousin, The Digby Pines, in Nova Scotia – and not unlike the fictional Overlook hotel, as portrayed in Stephen King’s famous book, The Shining. This might not be a coincidence – hotel staff say that Stephen King stayed here before it was written (and has returned since). 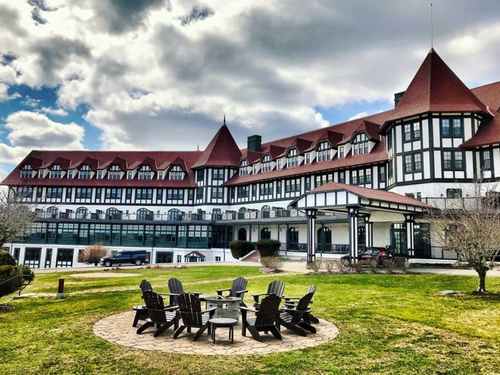 The Algonquin is currently owned by Marriot, and as such, much of its interior was renovated to a modern, glossy-grey standard. To see the “real” hotel, just ask the front desk for a ghost tour. When we did, the world’s most cheerful hotel concierge took a small group of guests into the hotel’s service elevator….and then down into the world’s scariest hotel basement.

In the dark, walking in single file, crouching under copper pipes, we travelled through long-forgotten tunnels. Shaking with fear, I heard the jingle of a janitor’s keys – as promised. The night watchman is only one of several ghosts said to inhabit the property, including a bellman who greets guests in the corridors, and most famously – the spirit of a weeping, jilted bride in room 473. 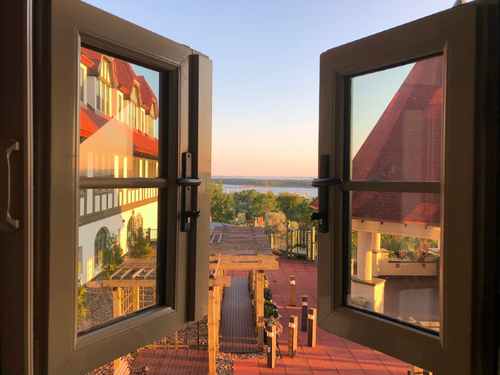 The view from our room…not too far from the suite of the weeping bride/photo credit: Helen Earley

The Algonquin isn’t the only place to meet the paranormal in St. Andrews by-the-Sea. On Friday and Saturday nights, during the summer, take a tour with Ghost Walks of St. Andrews by-the-Sea, where volunteers from the Charlotte County Archives will guide you on a creepy yet educational 1-2 hour walk around the historic spooky, waterfront town.

Whale Watching on the Bay of Fundy

But there’s more to this charming destination than hotels and ghouls – the real adventure happens when you take to the sea for some of the best whale watching opportunities in North America.  In the warm waters of the Bay of Fundy- which famously, has the highest tides in the world- you are almost guaranteed to see humpbacks, minkes, as well as other small mammals and birds during the feeding season, from June to October. 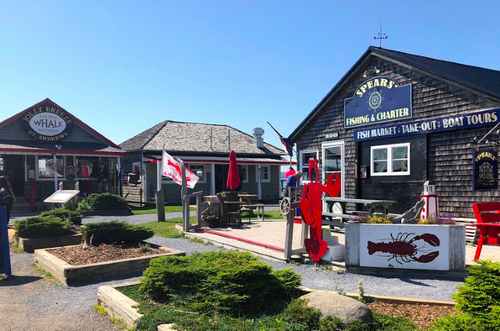 There are many options for whale watching and aquatic adventures in St. Andrews by-the-sea/photo credit: Helen Earley

There are several options for whale watching.  Jolly Breeze Adventures offers a tall ship, The Jolly Breeze of St. Andrews – a 72 foot New Zealand-built cutter, with lots of space on board for moving around, eating and drinking (there is a licensed bar on board).

The Tall Ship experience is perfect for seniors or families with children, who can take turns steering the vessel, and receive a ‘Captain’s certificate’; touch starfish, crabs, sea anemones, shells in a touch tank; check out samples of whale baleen, plankton and krill – or simply dress up like pirates and have their faces painted. 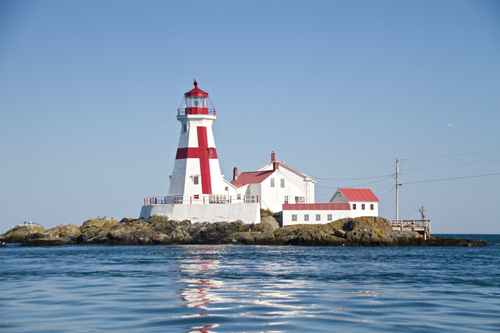 On the Passamaquoddy Bay, see the Head Harbour light station, the second-oldest lighthouse in New Brunswick, said to be the inspiration for the story, Pete’s Dragon/photo credit: Debbie Malaidack

Daredevils can opt for a faster ride – a 33-foot aluminium hulled Zodiac Hurricane that was formerly used by the FBI. This is a high-seas adventure, and travel on the zodiac requires you to wear a full survival suit. If they can fit into a suit, then your well-behaved children, aged 9 and up, are permitted on the Zodiac.

Speaking of comfort, the boat owned by Jolly Breeze has super-bouncy hydraulic seats that cushion the impact of the waves. I didn’t understand the significance of this until we got out into the choppy water – without this level of comfort, we’d have all come home with sore backs and bottoms. 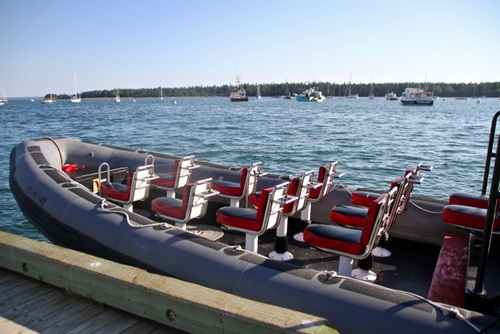 Bouncy hydraulic seats were a hit with our crew/photo credit: Debbie Malaidack

The tour, which lasts about two and a half hours, brought us to prime whale watching territory in a flash, giving us plenty of opportunities to get up close to the whales. On the day we visited, it was so hot, we peeled off our survival suits to get some sun on our shoulders. 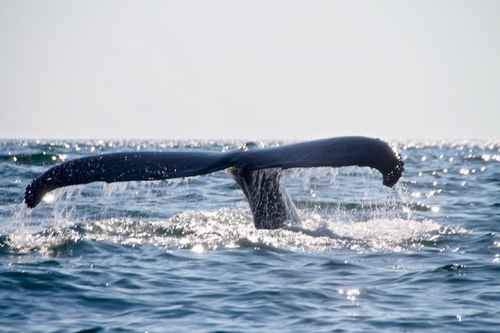 We agreed that it was the best whale-watching any of us had experienced /photo credit: Debbie Malaidack

On the way back, our captain produced a thermos of hot chocolate and a cookie for each of us to enjoy as we marvelled over how many whales we had seen, and how close. Most of the members of our group agreed it was the best and most satisfying whale watching experience they’d ever had.

Now that we’ve talked about boats how about driving on the ocean floor? That’s exactly how you’re going to travel to Minister’s Island, only minutes from the town centre of St. Andrews. The island is home to a house called Covenhoven, the former summer home of CN rail chief William Van Horne. A tour through the house and lands proves that Van Horne was much more than merely a “captain of industry.” He was a musician, painter, engineer, architect – a brilliant mind, with numerous passions immortalised through the restoration of the estate. 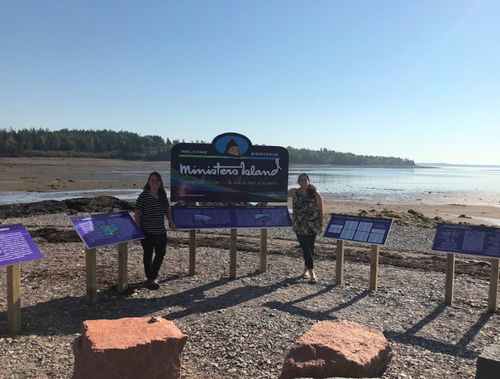 When we visited, there were plenty of guides on hand to lead us through a tour of the property, allowing us not only to picture what life was like in the heyday of rail travel but also to offer insight into one of the great minds of the 20th century. 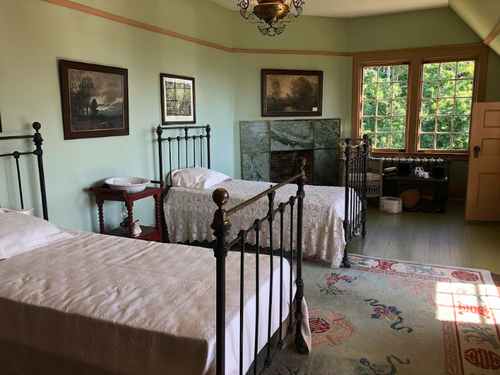 Children will be delighted with the grandeur of the house and fascinated by the works of art (Van Horne’s grandson’s room is especially charming), but just as exciting is a walk to the round bathhouse, the fields, and the barn, where Van Horne and later, his daughter Addie, kept prize-winning horses and cattle. 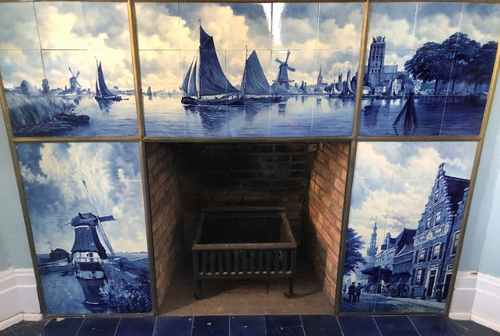 In fact, with so many acres of grounds to explore, Minister’s Island is the perfect attraction for families with energetic munchkins who love the outdoors. Tip: If you go, watch the tides. The road to Minister’s Island is underwater at some times of the day. If you stay too late, you’ll get stuck! 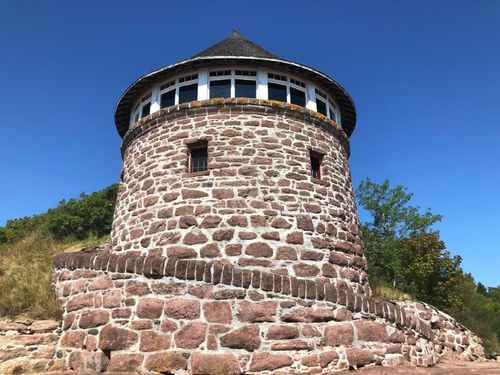 The bath house on Minister’s Island, leading from the Estate down to the water – probably the most elaborate changing room you’ll ever see!/photo credit: Helen Earley

St. Andrews-by the sea is a unique treasure, visited by many returning tourists from both sides of the Canada-US border every year. To visit St. Andrews by-the-Sea is to step back in time to a simpler seaside life…with a few wild, spooky thrills thrown in for good measure.