But while curating a new attire each day with sufficient layers to make the commute bearable feels like a goal by itself, there’s something regarding cold-weather dressing that invites a bit a lot more sartorial creativity than is possible in summer. We’re figured out to enjoy it.

You’re likely in a somewhat unpleasant center ground as you commemorate January (ultimately!) if you’re anything like us concerning an end but just as lament the fact that Spring is still SO. MUCH. AWAY.

If you’re tired of the wintertime layer you’ve been cosying up in for the last couple of months, we recommend upgrading it to this rather major dogtooth one from H&M.

A print that’s rather fallen off the fashion world’s radar over recent years, we’re pleased to report that it’s back with a vengeance. As well as, unsurprisingly, we’re already identifying it on Instagram …

But there’s a smidge of bad news … it’s marketed out in the routine fit.

But there’s additionally great information (rollercoaster, right?) … it’s still in stock on the website in the H&M+ array. 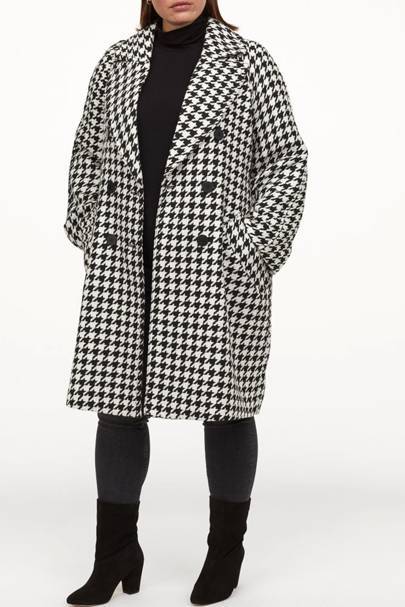 Perfect for those with a fuller figure, these will likewise work on smaller sized frames thanks to the style’s normally large shape. As well as who does not like an oversized layer?

It’s probably smart to break one up pronto if we’re to discover from past blunders. We’re forecasting it’ll market out pretty quickly.