Bitcoin’s dominance index has dropped to 61.9%, the lowest level since February even as altcoins see increased attention from the market.

The price of Bitcoin has failed to climb out of a very tight range since a violent rejection at $10,400 sent prices to lows of $9,000. The past several weeks have seen bulls eye a major move above $9,300 to give a proper signal that the benchmark digital asset has finally broken out of the rut.

The stalling has however coincided with a comeback by several altcoins. Cardano, Stellar and Tezos have all surged in the past 30 days, with Chainlink going parabolic to hit a new all-time high.

With such a surge in place, the market capitalization of altcoins has increased while that of the top cryptocurrency has shrunk to see its dominance significantly cut.

As of writing, data from CoinMarketCap shows that Bitcoin’s dominance now stands at 61.9%. It is the lowest index the top coin has recorded in five months.

Over the past 24 hours, the Bitcoin price has gained a meager 0.45%. While top cryptocurrencies like Ethereum, Ripple, Bitcoin Cash, and Litecoin are similarly struggling for upsides, the picture is quite different when we look at the list of gainers among small-cap coins and tokens.

Among the top 10 cryptocurrencies, Binance Coin has the biggest upside on the day. The 8th largest cryptocurrency has gained over 4% in the past 24 hours, but still lags several small-cap coins that are posting double and triple-digit gains.

Bitcoin price ready for a breakout

Binance CEO Changpeng Zhao commented on Bitcoin’s price being “really stable” at the moment. He however believes the leading cryptocurrency will soon see a breakout to new highs above $10,000.

In an interview with Bloomberg he said, “I think sooner or later it’s going to break out, […] but right now Bitcoin has been really stable”.

According to the crypto analytics platform Santiment, Bitcoin’s stalling is due to low token circulation. The firm has noted that an uptick in price could be in the offing, citing one of its price indicators.

The firm contends that Bitcoin’s network value to transaction (NVT) ratio has reached a new low. However, its price trajectory has formed a bearish divergence as shown in the chart below. 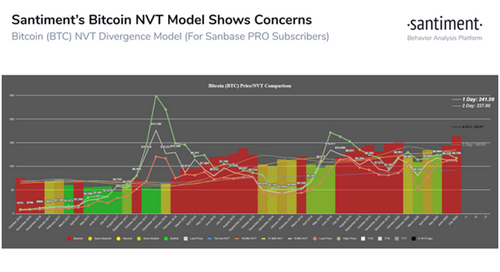 Bitcoin needs to break the $9,300 resistance line and surge to recoup part of the billions in market capitalization lost over the past two weeks. 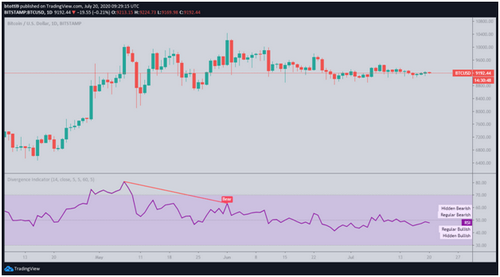