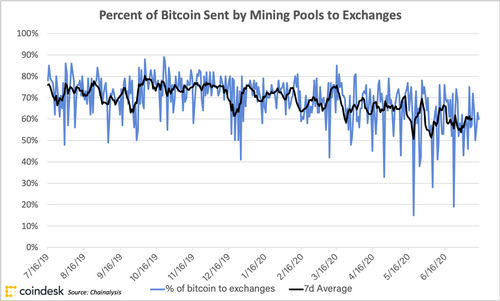 Bitcoin miners curtailed their supply to exchanges to the lowest level in 12 months during the second quarter, revealing their long-term bias on the cryptocurrency.

The daily miner selling activity, as measured by the percentage of bitcoin sent to exchanges, fell to a 365-day low of 15% on May 20, according to data provided by Chainalysis. The metric remained in a declining trend throughout the April to June period.

Bitcoin miners operate on cash and are constant sellers in the market, liquidating at least some part of their holdings every day in order to cover their operational costs.

“It seems miners, at least, expect to be able to sell bitcoin higher in the coming months,” research analysts at CoinDesk noted in their quarterly report while discussing implications of the drop in the daily miner selling.

Indeed, bitcoin miners, like any other seller, are governed by the law of supply, which states that other factors being constant, price and quantity supplied of a good are directly related to each other.

They tend to hoard coins when prices are expected to rise and are willing to sell more at higher prices. This is because mining profitability is heavily influenced by the gyrations in bitcoin’s price.

As such, the decline in daily miner selling observed in the second quarter could be considered a sign of bullish price expectations among those responsible for making coins.

It should be noted that miners reduced supply even though bitcoin’s price rally stalled following the May 11 halving. The cryptocurrency bounced back from $3,867 to $10,000 in the two months leading up to the event and has struggled to establish a strong foothold above $10,000 ever since.

The data appears to validate bullish price forecasts made by prominent analysts over the past few months. Bloomberg analysts predicted in May the cryptocurrency could challenge the record high of $20,000 by the end of December.

However, not all analysts consider miner hoarding a bullish sign. Charlie Morris, founder of data source ByteTree, told CoinDesk in March that miners tend to build inventory when they think the market lacks strength to absorb extra supply. After all, mining pools account for the lion’s share of bitcoin mining and account for the highest percentage of total bitcoin flowing into exchanges. Hence, they have to be extra careful while boosting supply because their actions can lead to exaggerated sell-offs.

So far, bitcoin has failed to capitalize on decreased miner selling. The cryptocurrency continues to trade in the multi-week range of $9,000 to $10,000, according to CoinDesk’s Bitcoin Price Index. Meanwhile, the derivatives market isn’t so optimistic. Options market data suggests traders are anticipating a price pullback in the short term.