A sharp drop in OKEx’s trading volume and stablecoin reserves – tether (USDT) in particular – may reveal an ongoing exodus of its users after the popular crypto derivatives exchange unexpectedly halted all crypto withdrawal activities for about five weeks.

Data from analytics service CryptoQuant shows that the amount of tether held in OKEx wallets has dropped to 6.69 million from 275.0 million between Nov. 25 and Dec. 1, down 97.6% in less than a week. Malta-based exchange OKEx has a large user base in China and tether, the world’s largest dollar-backed token, with total assets of $19.35 billion, is one of the most popular stablecoins used by Chinese traders.

The amount of USDT reserved on OKEx over the past year.
At the same time, total daily trading volume on OKEx has declined significantly during the same time period – down approximately 67.7% from Nov. 25, according to data compiled by CoinDesk. The volume of tether traded on OKEx plunged 70%.

Traders often use stablecoins as an intermediary step in order to buy riskier crypto assets. After individuals purchase stablecoins with U.S. dollars or other government-issued currencies, exchanges are usually the platform where the stablecoins go to be traded for cryptocurrencies such as bitcoin, ether or others.

The Chinese government prohibited local crypto exchanges from allowing trades between crypto assets and the Chinese yuan in 2017, but people can still trade renminbi into stablecoins through over-the-counter (OTC) desks.

The collapse of trading volume does not appear to be a mere lull in interest, especially considering bitcoin is near its all-time highs and other cryptocurrencies have been rallying.

The sudden and significant decline in tether in reserves on OKEx could indicate that users are transferring their stablecoins elsewhere – possibly to a different exchange or to their private cold wallets, according to analysts and traders who spoke with CoinDesk.

Chinese users’ alternatives to OKEx have also had similar problems amid a recent government crackdown on exchanges.

However, during the same time period, the tether reserve on Huobi logged a small increase, according to data from CryptoQuant, although the same metric dropped slightly on Binance. While legally based in Seychelles, Huobi also focuses on China-based customers, as does Binance, which isn’t clear on its location.

Tether reserves on OKEx, Huobi and Binance in the past year.
A spokesperson for OKEx said CryptoQuant’s data did not match the firm’s internal records, but OKEx has yet to provide their own figures.

Nonetheless, data from blockchain analytics firm Glassnode also shows that a substantial amount of tether and other stablecoins have left the exchange in the past week. 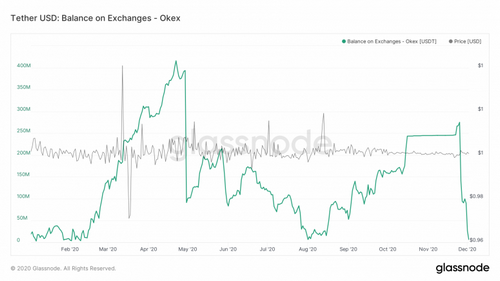 According to Glassnode data, balances of USDC and PAX on OKEx have also dropped sharply in the past week. 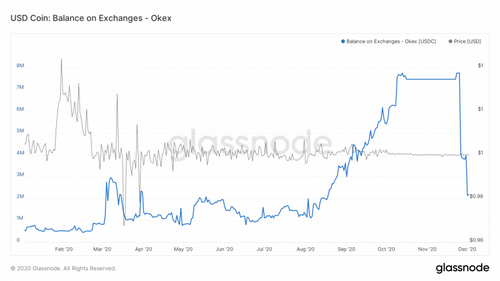 USDC balance on OKEx since January 2020. 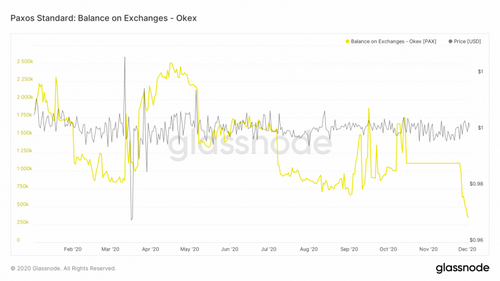 Paxos Standard balance on OKEx since January 2020.
In a recent ask-me-anything (AMA) session, OKEx CEO Jay Hao said the freezing of OKEx’s crypto withdrawals was harmful for his company and that as a result trading volumes have dropped.

“We have seen an understandable decrease in trading activity on the exchange,” Hao said.

Hao did not explain why the backups of the crypto private keys could not be used during the freeze. According to OKEx, the suspension of all cryptocurrency withdrawals was due to one of its keyholders being “out of touch” with the exchange after it was “cooperating with a public security bureau in investigations.”