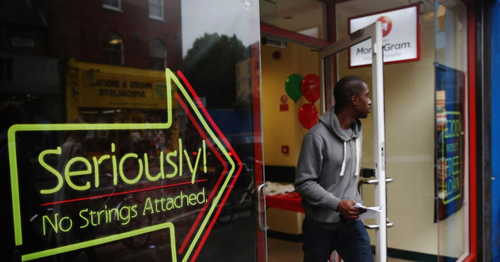 Big U.S. banks have long refused to lend to coal miners that use a mountaintop removal technique. Wells Fargo says it prohibits such lending because it recognizes the “elevated community concerns associated with the practice.”

Should banks like Wells Fargo be allowed to stop lending to an industry because of its impact on the environment or their lack of commitment to social justice? Doesn’t Wells Fargo have an obligation to be neutral?

J.P. Koning, a CoinDesk columnist, worked as an equity researcher at a Canadian brokerage firm and was a financial writer at a large Canadian bank. He runs the popular Moneyness blog.

This is the issue at the heart of a recent rule change proposed by Brian Brooks, head of the Office of the Comptroller of the Currency, or OCC, a key U.S. bank regulator. Brooks and OCC chief economist Charles Calamoris want to stop banks from “politically driven discrimination.” Their rule would prevent bankers from using anything other than regular credit and operational criteria for evaluating a company seeking financial services.

The upshot? Wells Fargo would have to re-bank coal miners that practice mountaintop removal. Banks would also be required to restart lending to oil companies involved in exploring Alaska’s North Slope, a practice that the likes of Wells Fargo, Citigroup, and JP Morgan Chase have all promised to avoid. Nor would they be allowed to cave into activists who call for account closures of groups they don’t like, say like Planned Parenthood.

I disagree with the OCC’s proposed rule. The underlying motivations are good ones, especially in context of Operation Choke Point (see below). But I don’t think the U.S. needs it. It’s ironic that, in trying to depoliticize the banking system, the OCC is likely precluding greater diversity in service providers.

Operation Choke Point was an Obama-era program that tried to sever unfavored industries from the banking system. In 2011 the Federal Deposit Insurance Corporation, or FDIC, a Federal government body that supervises and examines U.S. banks, placed a number of perfectly legal business categories on its “high-risk” list.

One of these was payday lending, an industry that is often maligned for preying on a poor clientele. Internal FDIC emails voiced an intent to “get at payday lending” and to “find a way to stop our banks from facilitating pay-day lending.”

We now have decentralized platforms where vilified but legal companies can go to secure financing.

After several payday lenders sued the FDIC for violating their due process rights (the OCC’s Calomiris provided expert testimony), FDIC agreed to settle the dispute. The regulator admitted that “certain employees acted in a manner inconsistent with FDIC policies” and  issued a statement reiterating that carrying out its responsibilities rests on “laws and regulations, not on personal beliefs or political motivations.” And thus Operation Choke Point was shut down.

I think everyone can agree that Operation Choke Point was reprehensible. The core regulatory and central banking layers of the financial system stay must stay neutral. No matter what sorts of legal businesses banks choose as their customers, every bank should be granted equal access to the Federal Reserve’s core payments tools. Nor should FDIC officials be able to use its examination powers to favor businesses.

The problem with the OCC’s new fair access rule is that it has a huge blast radius. Yes, it would prevent future government-run choke points. But it would unnecessarily damage efforts by banks to shape their brands in ways that are designed to satisfy emerging consumer tastes.

The 21st century consumer wants to know more about the provenance of the things they buy. We don’t just want tuna, we want dolphin-friendly tuna. We don’t just want coffee, we want Fairtrade coffee. And we don’t want our t-shirts to be made in sweatshops with Xinjiang-grown cotton. We want ethical t-shirts.

This shift in consumer spending has migrated into finance. Think socially responsible indexes, green exchange-traded funds, and activist investing. We see it in gold markets too. The world’s main trading venue, the London Bullion Market, has set up a responsible supply chain that requires refiners to verify that miners safely use mercury and are not involved in human rights abuse.

In banking, loans are the fodder for creating safe deposits. So if a bank wants to attract modern consumers by setting up a clean supply chain (aka Fairtrade bank account) that means pruning source material for deposits, say coal miner loans.

But the OCC’s rule would block the entrance of this new consumerism into banking.

The argument against allowing Fairtrade bank accounts is that “banking is special.” Brooks and Calomiris argue that government chartering and direct access to the Federal Reserve obligate  banks to provide services to all companies. And so America must do without the banking versions of dolphin-safe tuna and organic milk.

But this downplays the competitiveness of the U.S. banking system.

If Wells Fargo chooses to avoid making a profitable loan to an Alaskan oil explorer because it wants to greenify its deposits, then Bank of America, Regions Financial or any other bank that isn’t quite so concerned will swoop in, make the loan, and gobble up the forgone profits.

Nor are banks the only source of financing for firms. The U.S. has some of the deepest capital markets in the world. Our Alaskan explorer can issue commercial paper, junk bonds, or equity. Or perhaps some enterprising intermediary, say a private equity firm, will find a way to break the Alaskan oil embargo by borrowing from Wells Fargo and onlending the funds to the blacklisted entity.

Lastly, we don’t live in the same world we did five years ago. With the emergence of public blockchains like Ethereum, we now have decentralized platforms where vilified but legal companies can go to secure financing. Just create an SEC-approved token and list it on a decentralized exchange. Voila, Arctic oil drilling bought and paid for.

For those worried about accessibility, we don’t need the OCC’s new rule. To guard against future government-sponsored choke points, payday lenders have already demonstrated the best defence: the justice system. The OCC’s rule would only stifle the ability of banks to create new products for today’s discriminating customer. Surely American finance is rich and diverse enough to handle Fairtrade bank accounts.