Bitcoin was lower on Monday, holding just above $19,000 after rallying about $1,000 over the weekend.

“There is an element of fatigue, with the market unable to drum up the momentum needed to spur us to new highs,” Matt Blom, head of sales and trading for the cryptocurrency firm Diginex, told clients in an email.

For so many reasons, 2020 will go down in history books. For many of those same reasons, it could go down in economics textbooks.

This year saw the biggest drop-off in economic activity since the Great Depression, the biggest money-printing episode in the Federal Reserve’s 107-year history, an epochal shift toward remote working, negative prices for crude-oil futures and the first real signs the global financial system might be migrating toward fast-growing markets for cryptocurrencies and digital assets.

Bitcoin was invented just 11 years ago as the first and original cryptocurrency, intended for use in an electronic peer-to-peer payment system that wouldn’t be controlled by any person, business or government. At the start of the year, bitcoin was still considered a fringe investment, disparaged by the likes of the billionaire investor Warren Buffett as having “no value.”

By the end of the year, bitcoin had pushed to the center of conversations among big investors and Wall Street firms – cast by proponents as a hedge against the potential currency debasement that might come from trillions of dollars of coronavirus-related stimulus money emanating from central banks and governments around the world. Others saw growing mainstream acceptance of the cryptocurrency and its underlying blockchain network as validation of a landmark technology that might forever change finance.

Whatever the case, the bitcoin market in 2020 offered as good a prism as any through which to view the year’s monumental economic developments – and the responses to the crisis from national authorities and monetary policymakers. 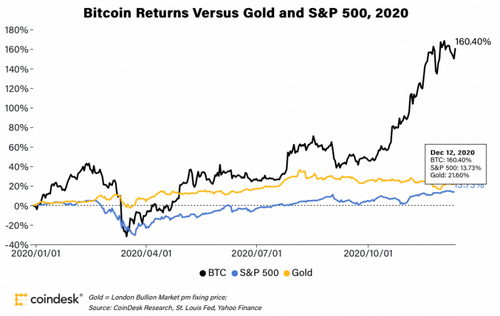 Bitcoin’s returns in 2020 were multiples those of the Standard & Poor’s 500 Index and gold.

Over the course of the next several days, First Mover will provide a recap of how the bitcoin market evolved over the course of the year, with prices for the cryptocurrency nearly tripling, attracting bullish commentary from big traditional-finance players including JPMorgan Chase, BlackRock, AllianceBernstein, Morgan Stanley and Tudor Investment.

That story might really represent another way of recounting the broader narrative in which low interest rates and the dollar’s reign as the global reserve currency allowed the U.S. government and its corporations to amass a heavy debt load in the years before the coronavirus hit. Once it did, the response was to invoke what one leading economist described as the “war machine” – the Federal Reserve financing U.S. government emergency-relief packages costing trillions of dollars.

Eventually, markets from stocks to bonds became hooked on the expectation that stimulus would be provided in amounts needed to keep investors from suffering losses deep enough to impair confidence and derail the economic recovery.

All the while China pushed forward with its plan to roll out a digital version of its yuan, raising the specter that a virtual currency from the world’s second-biggest economy might eventually challenge the U.S. dollar’s dominance in payments for global trade. In the U.S. and elsewhere, billions of dollars of venture capital and trader money flowed into an array of obscure digital tokens on blockchain-based, semi-autonomous trading and lending systems – collectively known as “decentralized finance,” or DeFi; the fast-paced growth suggested that digital-asset markets might represent a haven of innovation in an otherwise stagnant global banking system.

Whether due to causation or correlation or merely wishful thinking, the bitcoin market, long viewed as a hotbed of volatility and unfettered speculation, suddenly seemed to rise with nearly every new twist.

Coming Tuesday: Even before the coronavirus hit, bitcoin traders and mainstream economists alike were growing increasingly concerned about the slowing U.S. economy, rapid growth in corporate debt and whether the dollar faced growing threats to its global monetary hegemony.

Bitcoin daily price chart shows profit-taking in the week after the cryptocurrency’s ascent to a new all-time high, followed by a recovery in recent days.

Bitcoin’s revived uptrend could soon lead to a much-anticipated breakout above the $20,000 mark.

“We have witnessed a large move up over the weekend, with MicroStrategy’s efforts to increase bitcoin holdings from several large players bringing with it fresh optimism,” Matthew Dibb, chief operations officer of Stack Funds, told CoinDesk. “Our belief is that we will see a breach of $20,000 in the coming weeks.”

On Friday, business-intelligence firm MicroStrategy raised $650 million through a convertible senior note sale to fund bitcoin purchases; the deal was upsized from $550 million. Since then, the cryptocurrency has rallied by over $1,000 and was last seen trading near $19,100, according to CoinDesk 20 data.

The cryptocurrency nearly doubled from $10,000 to a new record high of $19,920 in the 12 weeks to Dec. 1, before falling to $17,700 last week amid a bout of profit taking. Pullbacks are a normal element of bull markets and often recharge the engines for a bigger ascent.

Kenetic Capital’s CEO Jehan Chu also foresees bitcoin marching onward with “two steps forward, one step back” price action. The breakout, however, may remain elusive until the new year, as some investors are still looking to sell around record highs.