XRP has declined sharply over the past 24 hours, losing nearly 17% of its value against the US dollar at the time of writing. The Ripple token currently trades around $0.46 and could tank even further if downward pressure holds. 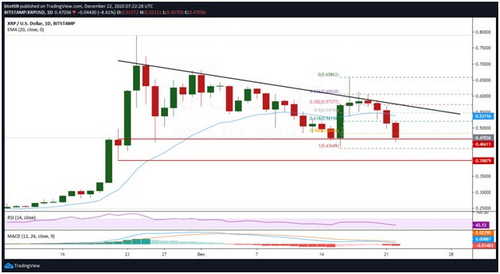 The massive losses seen on the day come as reports emerge that the US Securities and Exchange Commission (SEC) is looking to sue Ripple for allegedly selling unregistered securities.

XRP is currently trading lower, with its price currently below the 20-day exponential moving average ($0.537). The breakdown to the horizontal trendline of a descending triangle pattern and the presence of a cluster of resistance areas means retesting recent highs might be a tall order for XRP bulls.

Apart from breaking below the 20-EMA on the daily chart, XRP/USD is also trending near the lower limit of a descending parallel channel on the hourly chart. The trendline suggests extended losses to $0.439. 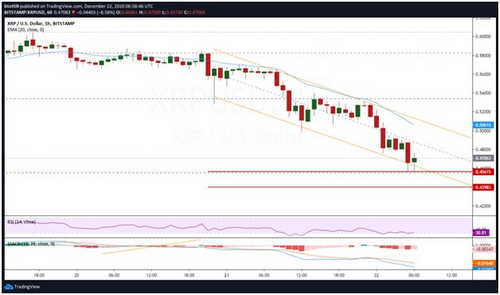 The hourly RSI has dropped below the midpoint and is trading near oversold territory to suggest bulls may attempt to push prices higher. However, the MACD indicator remains well inside the bearish zone and a lack of decisive upside action is likely to see XRP/USD remain range-bound between $0.430 and $0.501.

The bearish scenario will be invalidated if the XRP/USD pair breaks above $0.51 and retests prices near $0.540.

Ripple CEO Brad Garlinghouse has taken to Twitter to lambast what he calls the SEC’s attack on crypto.

“Today, the SEC voted to attack crypto. Chairman Jay Clayton—in his final act—is picking winners and trying to limit US innovation in the crypto industry to BTC and ETH”.

The Ripple executive added that the US regulator was “out of step with other G20 countries [and] the rest of the US government”. Suggesting that the Commission’s decision to sue Ripple would “directly” benefit China, he vowed:

“Make no mistake, we are ready to fight and win – this battle is just beginning.”

According to SBI Holdings CEO Yoshitaka Kitao, XRP is not a security as already made clear by Japan’s Financial Services Authority (FSA). The former Softbank CFO remains “optimistic that Ripple will prevail in the final ruling in the US”.

“Looks like the Ripple/XRP team is sinking to new levels of strangeness. They’re claiming that their sh**coin should not be called a security for *public policy reasons*, namely because Bitcoin and Ethereum are ‘Chinese-controlled’”.

Ripple investors will keenly watch the unfolding events, but as Ripple CEO has said, it’s likely just the beginning for XRP and the team. The direction the price takes might thus take on some clarity if and when the SEC makes good its lawsuit.