In the teen movies of the 2000s, the kids always seemed to be drinking at house parties (on weeknights!), necking with boys (on weeknights!), and going to prom to drink and neck with boys. In my small group of close girlfriends in high school, our vices were far more circumspect, but daring in their own right.

There were five of us in the inner circle, all from strict-ish Asian-American households in the dizzyingly diverse, immigrant-heavy suburbs of Dallas that still managed to feel like a cultural wasteland. We fell into deep, easy friendships because there were things that didn’t need explaining. Yes, the thermostat has to be kept at a balmy 83 degrees in the summer. No, obviously I cannot stay out past 10 p.m. Yes, I am stooping slightly from bearing the weight of my parents’ hopes and dreams, thank you for asking.

We spent our Friday nights having our minds blown by uncensored episodes of Sex and the City, which we watched with the volume low, pretending to be versed in whatever Samantha Jones was getting up to; we snuck peeks at Cosmo magazines splayed out on the floor of the mall Barnes and Nobles, getting high on vanilla Frappuccinos and trying to decipher the bizarre hieroglyphics of womanhood; we read the smuttiest YA we could find. And one spring in 2005, we scored an exceptional piece of contraband: The new release of Carmen Electra’s aerobic striptease DVD.

I’m sure someone brought it home from Target as a joke, but soon it was a treasured possession passed from house to house, a kind of sisterhood of the traveling striptease. Remember Carmen Electra? 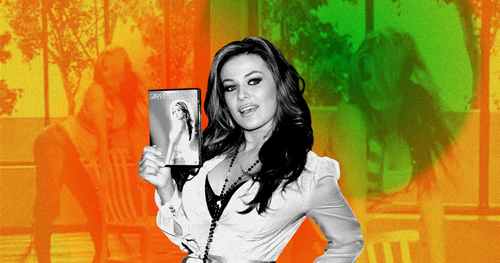 Formerly a protégé of Prince, she was also a dancer and a model, a Baywatch babe and MTV personality, a wife of both Dennis Rodman and Dave Navarro, and ubiquitous sex goddess of the late 1990s. She showed up on TV and in magazines, doing that casual smoldering thing and baring her perfectly toned midriff, as the era’s uniform required. In 2005, when I was 17 and Carmen’s career was probably past its zenith, she added fitness guru to her extensive resume, releasing a series of “aerobic striptease” exercise DVDs.

The thought of real, in-the-flesh boyfriends was still preposterous to me and my friends, so this mission statement was inapplicable. Still, when our parents were gone or busy, we barricaded the doors to the den and tried to get through the entire hour-long disc. We dutifully sashayed our wiry hips from left to right and did our best to pop out our nonexistent butts. We aimed to walk sexily toward the TV, one foot directly in front of the other in a straight line, just like Carmen instructed.

One maneuver required us to crawl our hands down our legs to the ground before springing back up, flipping our hair back in the process. But then it would all be over when Carmen would say something like, “Never underestimate the power of a finger in the mouth,” and it was all over. At which point we would lose our minds and collapse into a pile of giggles, laughing so hard that it was a better workout than the actual exercise routine. To her credit, Electra was so relentlessly sunny and earnest that when she said stuff like “the secret to sexiness is YOU,” and “it’s all about having a good time and not judging yourself.” I took it to heart. She was sparking a tiny revolution while rocking an impeccable smokey eye.