Russia could see a renewed surge of the coronavirus as early as this month, top health officials have warned.

Though Russia’s Covid-19 infections have stabilized around 18,000 per day in recent weeks, the country is still grappling with a record-shattering third wave, driven by the Delta variant, that started in early June. Despite the country recording several all-time high Covid-19 death tolls, the most recent on Aug. 26, authorities have continued to lift restrictions.

«We expect a rise in coronavirus cases, this is natural,” said Anna Popova, the head of Russia’s consumer protection watchdog Rospotrebnadzor, which has led Covid-19 response efforts along with the Health Ministry and the prime minister’s office.

“We hope full compliance with all sanitary and anti-epidemic rules will keep this increase low,” she told Interfax on Thursday.

She linked the potential spike to Russians returning to work and school following the summer holidays.

​​“Every year, when people return from vacation and children return to school, newly formed gatherings … result in a surge of acute respiratory viral infections in the second 10-day period of September for a variety of epidemiological and virological reasons,» she said.

Popova’s comments echo those made earlier by Denis Protsenko, the chief of Moscow’s main coronavirus hospital.

“For me, it will be tense from the end of September to the beginning of October. Three factors will collide at once: the flu, Covid and people returning from vacation,” the Ura.ru news website quoted Protsenko as saying at a press conference on Tuesday.

He urged Russians to get vaccinated to prevent severe infection and hospitalization.

Russia’s efforts to contain the pandemic have been foiled by slow vaccination uptake, with widespread skepticism toward the country’s three registered vaccines. In June, several regions imposed mandatory vaccination for a certain percentage of service workers.

Russian authorities have applied for registration of the Sputnik V coronavirus vaccine in the European Union, the country’s sovereign wealth fund financing the jab said Wednesday.

A spokesperson for the Russian Direct Investment Fund (RDIF) said the application with the European Medicines Agency (EMA) was lodged on Tuesday.

«It is an important milestone,» he added.

The first review of the documents filed by the RDIF is expected in February. 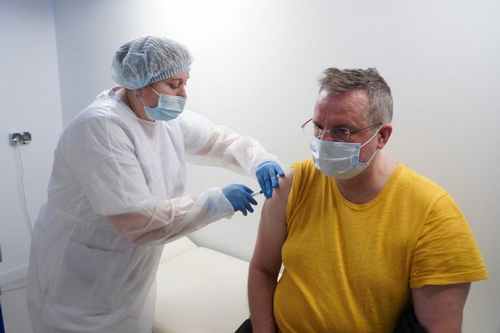 The EMA confirmed that a meeting with the Russian vaccine’s developer took place Tuesday «to discuss their development plan and their further engagement with the agency.»

But the EMA noted in a statement that «currently Sputnik V is not undergoing a rolling review.»

«EMA will communicate at the start of a rolling review procedure,» it added.

Russia in August registered Sputnik V — named after the Soviet-era satellite — months ahead of Western competitors but before the start of large-scale clinical trials, which left some experts wary.

Its developers have since said that the jab is more than 90% effective and Russia launched its mass vaccination campaign using the shot this week.

RDIF says that Sputnik has already been registered in a number of countries including Belarus, Venezuela, Bolivia and Algeria.