The more young voters there are, the better it is for Democrats, and in 2020, with expanded early and mail-in voting and new laws like automatic voter registration in Michigan and Georgia, some of the typical barriers for new voters were knocked down.

Young voters, particularly those of color, tend to vote Democratic by large margins; this fall, they choose Biden by an approximately 2:1 ratio. In Michigan, according to an early analysis by CIRCLE, voters aged 18–29 made up 13% of the vote and supported Biden by +27. In Arizona, young Latino voters who got involved in local immigration policy fights more than a decade ago helped deliver wins to both Sen. Kyrsten Sinema and Sen.-elect Mark Kelly, along with Biden.

A traditional “micro-targeted bullshit strategy,” as Walsh put it to me over the phone, can leave behind young voters.

What changed this cycle was a new infrastructure erected around youth-led political engagement, with tech tools like Instagram, under-40 elected officials fluent in social media, and young activists working together to leverage shared power.

Young girls on TikTok did their makeup while lip-synching Rep. Alexandria Ocasio-Cortez’s fiery speech after Rep. Ted Yoho called her a bitch, and Parkland students took to Twitter on the day of a mass shooting to swear at adult politicians offering “hopes and prayers” without policy changes on gun control. Anoll, the Vanderbilt professor, notes that, according to one social psychology theory, people look to a “social reference” in their group — a person or a few people on whom to model their own behavior, whether it’s a stylish classmate posting from last night’s BLM march or young leaders like Ocasio-Cortez. “Part of the appeal of AOC is not just that she’s young, but that she’s cool, she’s beautiful, she’s interesting — all of that is tied to the fact that she’s incredibly political,” says Anoll. “Young people [then] think, ‘well, I want to be cool and beautiful and smart and powerful and a feminist.’ That sets a new social reference for the group.”

While more traditional left-leaning advocacy organizations have generally avoided confronting the Democratic establishment, younger groups are acting more forcefully. “One of the key innovations of Sunrise is that we’re doing both protests to bring the issue to light in the streets, and we’re also deeply engaged in electoral politics to make sure that we get the leaders in that champion our issues,” says Garrett Blad, national press lead of the Sunrise Movement, which supported Ocasio-Cortez’s long-shot primary challenge in 2018. 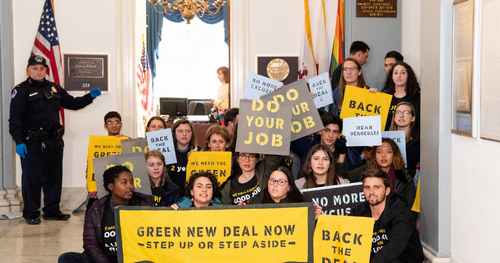 When Ocasio-Cortez was elected, she returned the favor by briefly joining a Sunrise Movement sit-in outside House Speaker Nancy Pelosi’s office. AOC’s endorsement vaulted the young organization into the national spotlight overnight, and its then-15 local chapters expanded to about 250 in the following weeks. Two years after confronting one of the most powerful establishment Democrats in the country, the Sunrise Movement was advising the party’s presidential candidates on their climate change plans. And the Green New Deal, which was conceived by Sunrise leaders in 2013, had become a nationally recognized initiative.

Still, the barriers for voting remain high for young people across the country, especially for those from communities of color. In Texas, college IDs can’t be used as a voter ID while gun licenses can, and college campuses are carved up into different counties, complicating registration efforts. In Wisconsin, Lateshia Parker, the press secretary for NextGen Michigan, told me robocalls targeted Flint residents, telling them it was too late to vote. Young people also just haven’t had the same amount of time to get in the habit of voting as people 50 years their senior.

Despite these challenges, Biden led the youth vote by about 188,000 in Georgia, overwhelmingly due to young Black voters who chose him over Trump 90% to 8% while young white voters backed Trump 62% to 34%, according to CIRCLE. Biden’s win was powered by a multiracial base of supporters. There was huge turnout growth among Asian Americans (up 91%) and Latinos (up 72%) since 2016, according to Bonier of TargetSmart. Both groups report higher rates of support for Black Lives Matter (69% of Asian Americans and 66% of Latinos) compared with 45% of white Americans, according to Pew, and lean heavily Democratic (78% of Asian American voters in Georgia backed Stacey Abrams in 2016). Even with their small voting share in Georgia, that makes a difference when Biden won by just 12,284 votes (0.25%), carried to victory by a coalition of young voters, voters of color, and affluent white voters in the suburbs.

Campaigns that target their resources only to “likely voters” tend to miss voters who don’t yet have a history of showing up to the polls. But some campaigns are starting to recognize the power of these untapped segments of the youth vote. In Massachusetts, 74-year-old incumbent Sen. Ed Markey, co-sponsor of the Green New Deal, was down by 17% in the polls after 34-year-old Rep. Joe Kennedy III announced his primary challenge back in 2019. Knowing that they couldn’t run a conventional campaign of turning out just likely voters, John Walsh, Markey’s campaign manager, said they dipped into the voter files to find young people interested in environmental issues. Along with the Sunrise Movement, they mobilized young climate voters to help Markey win the race by more than 10% — marking the first time a Kennedy lost in the state. A traditional “micro-targeted bullshit strategy,” as Walsh put it to me over the phone, can leave behind young voters.

Generation Z and younger millennials may have once had a reputation as frivolous, but you don’t hear that as much these days, a result of the real power they’ve demonstrated via both social media and turning out in huge numbers at protests — all of which has led to electoral success. “Once students realize what elected leaders — attorneys general, local sheriffs — are making what decisions, it becomes a lot more pertinent to be involved in the way that they are running our communities,” Ciarra Malone, the Georgia state coordinator for Campus Vote Project, told me about youth turnout for down-ballot races.

The battle to flip Georgia’s two Senate seats blue is still a longshot — both Democratic challengers significantly trailed Biden in vote counts, as some GOP voters broke for Biden but stayed with Republicans in down-ballot races — but there’s hope. Another 23,000 Georgians will turn 18 before the January 5 runoffs. The New Georgia Project has identified another 100,000 people they’ll attempt to register by the December 7 deadline, estimating that they’ll add 20,000 more new voters to the rolls.

“What I love about my generation is that we’re stubborn as hell,” says Daniels. “We understand that our fight isn’t over after Election Day. We’re still gonna be fighting.”