Pleas for people to stay home are increasingly falling on deaf ears, but they may also be actively shaping our perception in ways that are making things worse. There are strong social disincentives for people engaged in risky behavior to come forward and admit they were wrong.

“I did everything right, and I still got sick. Please wear a mask.” This was Heidi Stevens’ heartfelt message in a recent Chicago Tribune op-ed: “The positive test was a shock,” she wrote. “We’ve avoided crowds and restaurants and we always wear masks when we leave the house.” One feels for Stevens and her family and so many others who’ve gotten sick despite their best precautions. But I fear that messages like this op-ed send precisely the wrong message since it seems to suggest that no matter what you do, you may still get sick.

Stevens’ anecdote, while disheartening, is statistically unlikely, but its message is not that wearing a mask or staying home will protect you; instead, it is that everything is out of control and there’s nothing to be done. If so, why bother taking any precautions at all? “I’m not going out and looking to catch it,” Danny Rice of Elmwood, Nebraska, recently told the AP’s Grant Schulte. “I don’t want to catch it. But if I get it, I get it. That’s just how I feel.”

Meanwhile, the few super-spreader events that are regularly publicized are ones that involve the elite whose access to superior medical care also distort the true risks of large gatherings. The dominant stories of individuals with Covid-19 are of politicians and celebrities who get sick and seem to recover without great discomfort or (at least so far) lingering side effects — often because they have access to drugs out of reach for the rest of us. News of vaccines on the horizon, meanwhile, while a hopeful relief, may further disincentivize people from changing their behavior since it’s no longer a foregone conclusion that we’re in it for the long haul. 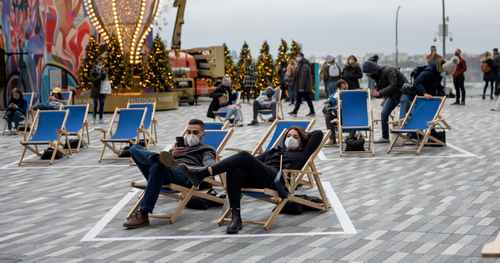 What we’re left with is a series of messages that all contribute to an overwhelming sense of a loss of control and a narrative about a deadly disease in which death is ignored or downplayed. As terror management theory suggests, what we’re seeing in response is a turn toward authoritarianism. (Places hardest hit by Covid-19 swung towards Trump in the election, and late-deciding voters broke for him as well). But even more acutely, we’re seeing a return to tribalism, a sense that what matters most of all is not the country we all share or even our cities and towns but only our immediate networks.

People who were willing to do their part in the spring and summer now find the allure of symbolic rituals worth the risk.

It leads to the kind of catastrophic thinking recently displayed by Farhad Manjoo in an op-ed for the New York Times. After exhaustively mapping out those in his extended network — one that includes, among others, a doctor, the mother of one of his kid’s classmates — Manjoo nevertheless concludes that Thanksgiving travel is an acceptable risk. After outlining numerous reasons to stay home, Manjoo ended with “Even after mapping my bubble, the question of whether or not to go still feels, in the end, like a gut call, ruled more by emotion than empirical data” — a stunning bad-faith ending that raised an absolutely warranted outcry on social media. (After this, the piece was edited to include more precautions Manjoo’s family was taking, but the conclusion remained the same.)

People like Manjoo who have decided that travel is worth the risk have stopped asking to whom. To do so would be to admit that our actions affect more than just our immediate tribes. The patients of the doctor whose child interacts with Manjoo’s own kids fade into the background as abstractions. Beneath Manjoo’s technocratic approach and polished prose, the piece is pathological — a symptom of a deranged system that has broken down entirely, one that has left each of us as individuals to make difficult decisions while encouraging us to deny the death around us and do what’s best for ours and ours alone.

“So shame me if you must,” Manjoo wrote in the original version of the piece. But shame isn’t the response I had to his decision. Once I pushed past my anger, I realized that the only emotion I was left with was grief. Grief for the thousands dead every day. Grief for the tens of thousands who are living now but will be dead by spring. Grief for the tens of thousands of utterly preventable deaths. We rely too much on a culture of shame and anger. We do not spend nearly enough time grieving. We refuse to face the raw experience of death, refuse to let it wash over us, letting ourselves be unguarded and open to what it has to say to us.

My invitation for you is to spend this holiday season grieving. It is nice to give thanks when there are things to be thankful for, and for many of us, simply having made it this far through the year is reason enough. But the real work to be done is in mourning — mourning the 250,000 already dead and the tens of thousands who will still yet die. My invitation for you is to spend at least some of your Thanksgiving with Faces of Covid, a Twitter account maintained by Alex Goldstein that is dedicated to running obituaries for every single life lost from this disease.

As I wrote earlier this year, we’ve lost our capacity to grieve as a nation, and bereft of this simple, fundamental human emotion, it has been far too easy for many to simply allow the deaths of their neighbors to become abstractions. Back in the spring, primarily motivated by fear and partisanship, many Americans decided simply to deny the reality of the pandemic, embracing conspiracy theories, quack medicine, and broken logic. The rest of us, by contrast, understood that to wear a mask, avoid indoor gatherings, and maintain distances were not just gestures of selfishness from people afraid of getting sick — these were also gestures of kindness toward others, and a down payment toward what this country might yet be: one of mutual aid and care.