Activity in bitcoin’s options market shows investors are eyeing more gains for the top cryptocurrency, which is now just 2.8% below a record high.

Bitcoin‘s one-month implied volatility, which is influenced by demand for call (bullish) and put (bearish) options, has risen to 81%, the highest level since May, having begun the month at 58%, according to data source Skew.

The major part of the move (from 60% to 81%) occurred over the past five days. The three-and six-month implied volatility metrics have also jumped to multi-month highs.

“The recent spike in implied volatility is the result of a decent chunk of call buying,” Vishal Shah, an options trader and founder of derivatives exchange Alpha5, told CoinDesk. “Investors are positioning for a bull market continuation.” 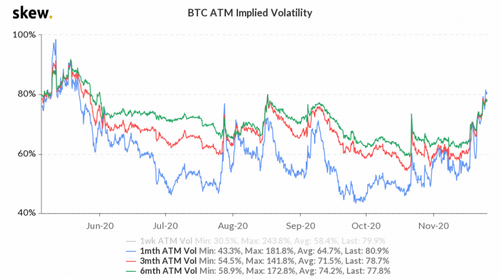 Bitcoin implied volatility
Further, put-call skews, which measure the spread between the cost of puts and calls, are hovering near record lows. In other words, call options have been drawing more robust demand than puts, a sign of investor expectations being skewed to the bullish side. 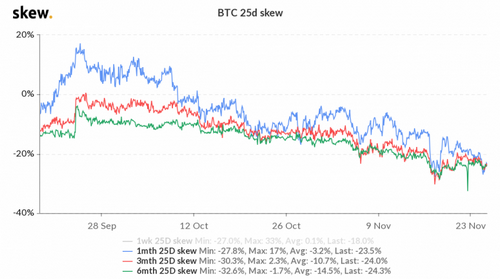 Bitcoin put-call skews
A week ago, the skews witnessed a bounce from lifetime lows, as some traders bought put options following bitcoin’s sudden pullback from $18,400 to $17,100.

However, the price dip was short-lived, and the cryptocurrency rose above $19,000 on Tuesday. As such, call buying continued, pushing the skews lower once more.

On-chain data also favors an extension of the ongoing bull run. For instance, bitcoin’s trade intensity, which measures the number of times each coin deposited on a spot exchange is traded, rose to 7.28 on Tuesday, the highest level since June 7, according to Chainalysis.

The metric shows demand is still strong, and suggests the market could absorb a potential rise in supply. However, holding sentiment remains strong, as evidenced by the continued decline in the number of coins held on exchanges. 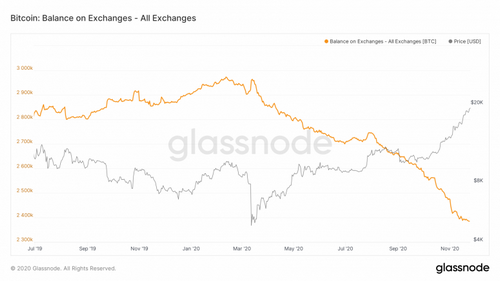 Bitcoin: Balance on exchanges
Some investors, though, may look to take profits if and when the cryptocurrency scales the $20,000 mark.

“We could see massive movements in the bitcoin price over Thanksgiving,” said Peter Smith, co-founder and CEO of Blockchain.com in an emailed statement. “A new all-time-high won’t be a surprise to some who’ve seen it as a ‘not if, but when’ scenario. It’s an inevitability, but the world will take notice, and that’s good for adoption.”